alert icon
Archived: This Page Is No Longer Being Updated

The 2016 STD Prevention Conference showcases the latest STD prevention research, both from the United States and abroad.

This page highlights three presentations and one scientific poster focusing on STDs among adolescents and young adults, including research into increases in STDs among young male adolescents across the U.S. and an analysis of an innovative STD self-testing option for university students.

Poster or presentation images, as well as full abstracts and related links follow below. 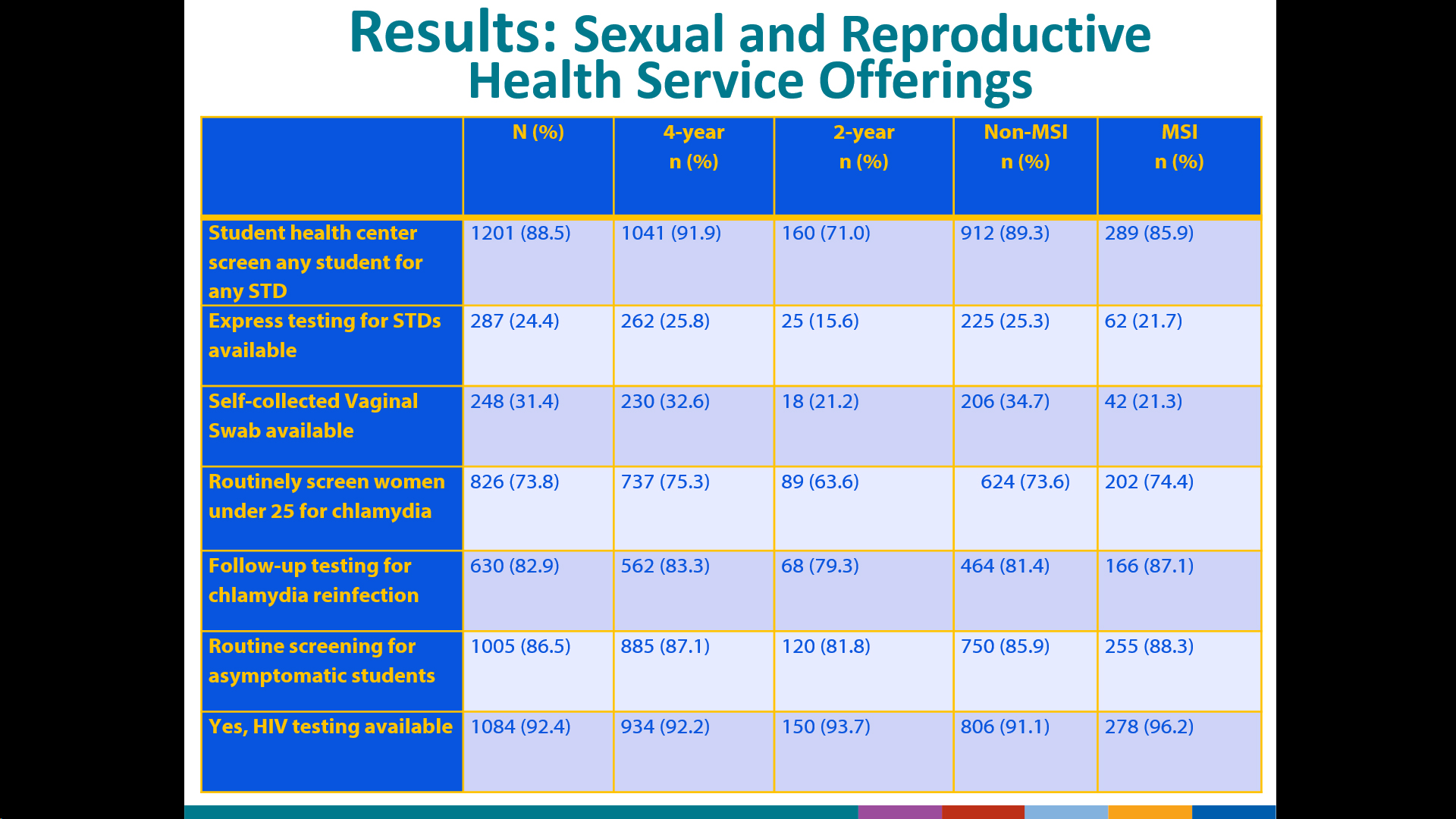 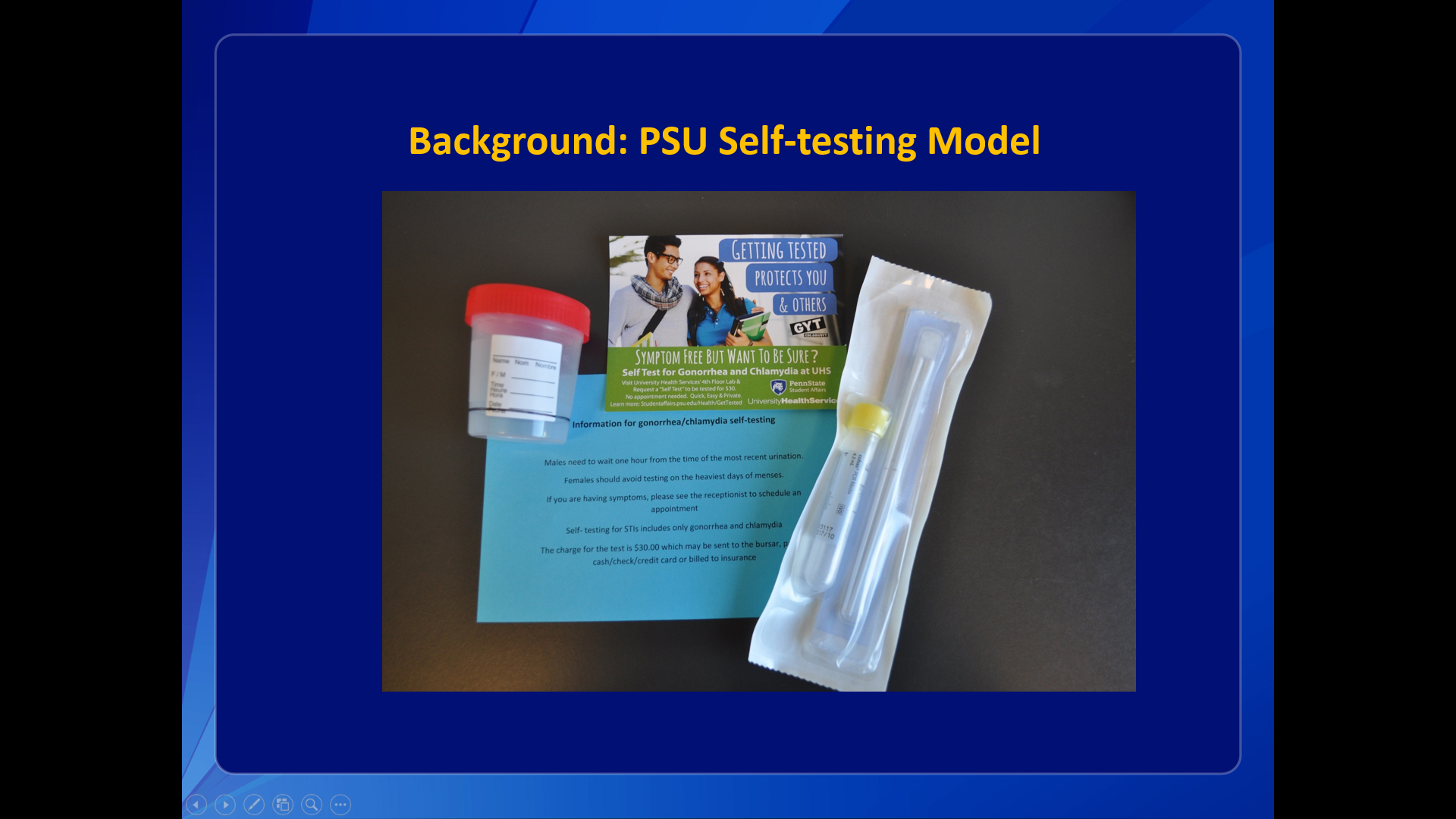 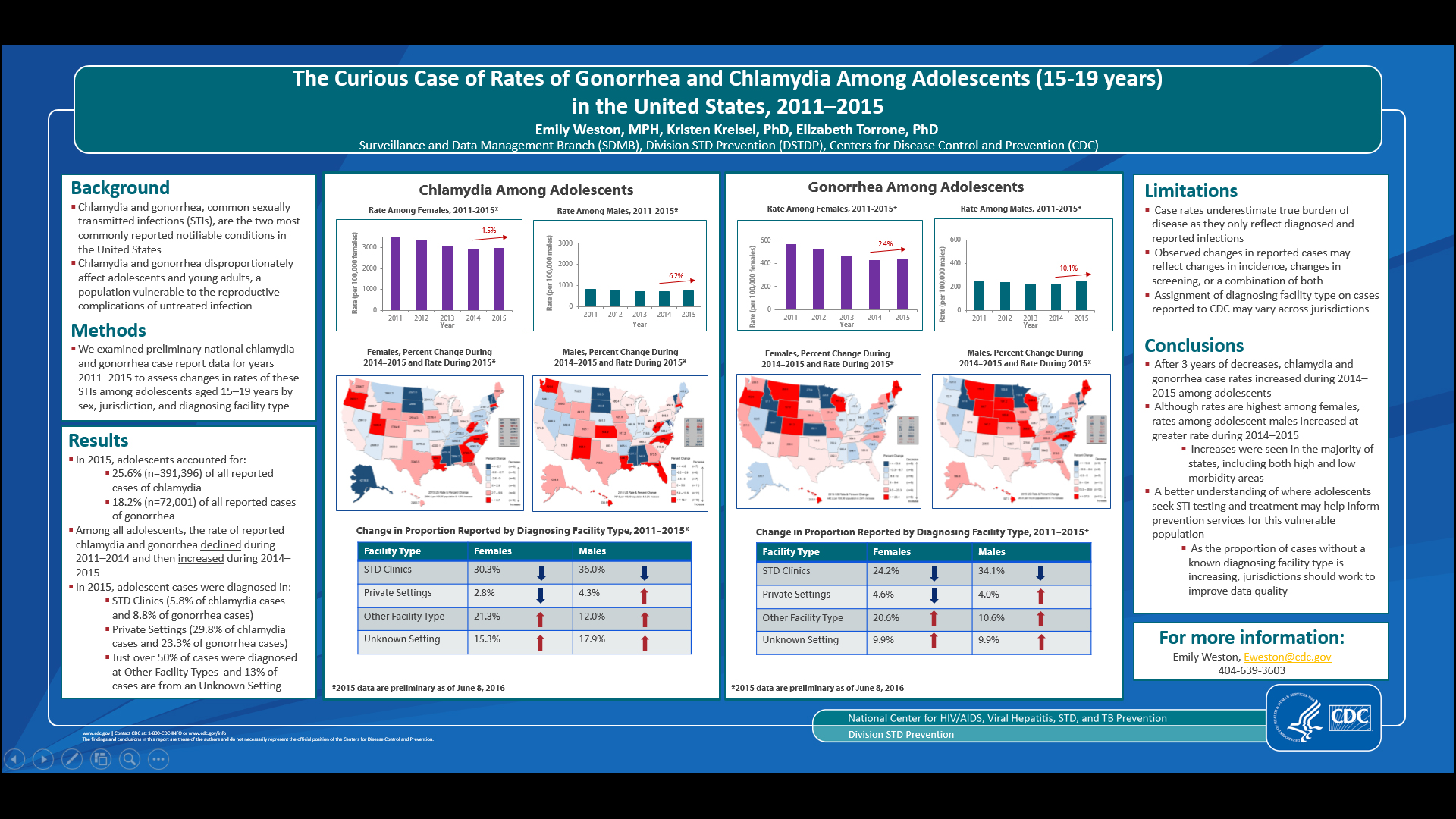 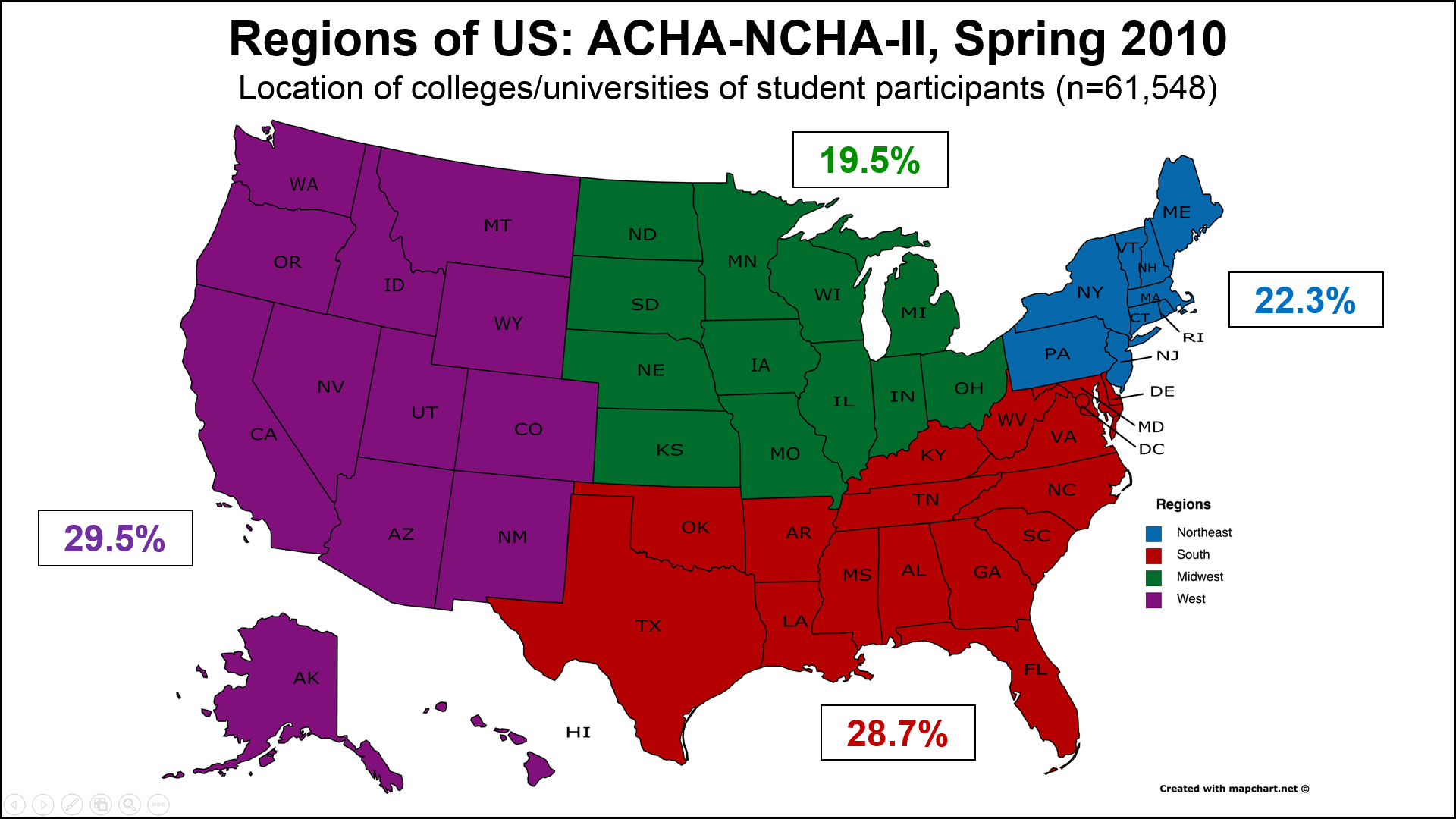 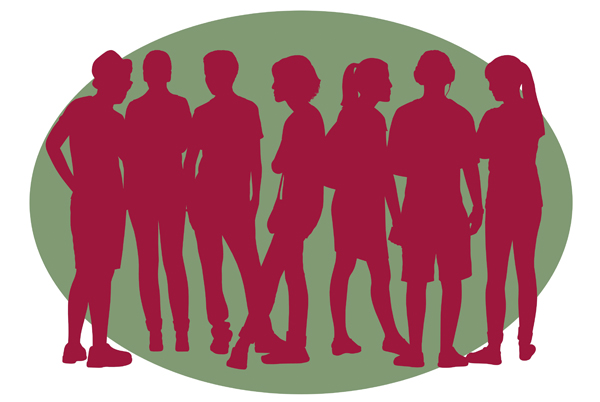 Background: College health centers (HCs) can play a pivotal role in the introduction and normalization of timely STD screenings. We surveyed colleges and universities across the United States to describe the array of sexual health services provided.

Methods: We sampled 885 US colleges from the Integrated Postsecondary Education Data System (2014-2015). Only active, 2- or 4-year, degree-granting, accredited institutions, which enrolled at least 500 students were included. 482 schools responded to the survey (55%), and were weighted to be nationally-representative. We reported on STD services provided and stratified results by minority-serving institutions (MSIs) and non-MSIs as well as 2-year and 4-year institutions; differences were tested using Chi-square analyses.

Conclusions: Colleges with HCs are providing a variety of sexual health services, but 2-year colleges may require additional support. Improvements could entail increasing routine CT screening for women, extra-genital STD testing for MSM, and removing barriers to testing by offering express and self-testing.

Background: National data estimates that STD testing among young adults remains low, despite high-risk behavior. University health settings are an ideal location for innovative testing methods; self-collected vaginal swabs (SCVS) are cost effective, more sensitive than urine, and easier to process/transport than traditional clinician-obtained specimens. However, research is limited on the acceptability of self-testing/SCVS and its effect on testing uptake.

Methods: To assess acceptability and uptake of SCVS (urine and self-collected vaginal swabs), we conducted a brief self-administered survey of students accessing a large US-based university health center from January – December 2015. The survey (PDA-based, Qualtrics) assessed student demographics, reasons for testing, and satisfaction with the self-testing option. The cost for CT/GC testing was $30.

Results: Overall, 18.8% (825/4391) of students opted for the self-test option, of which 189/825 completed the survey. Of students surveyed, 63% reported that their main reason for testing was: “I had unprotected sex and wish to get tested.” In the past year, 44% had 2-3 sex partners (vaginal or anal intercourse) and 42% reported 4 or more partners. Ease of testing/no appointment needed was the main reason for choosing SCVS (69%). The majority were very satisfied with the self-test option and likely to use the service again (82%). Among students choosing self-tests, positivity was 11.8% (11.9% female, 11.6% males) compared to 6.7% positivity (4.7% female, 12.4% male) in clinician-collected tests during 2015. Since implementation of the self-test option (2013 baseline), the health center has seen an 18.1% increase in overall STD testing and a 44.6% increase in the detection of positive cases.

Conclusions: Self-testing in the university health setting may be an efficient and effective way to provide STD testing for students, and may increase testing uptake. Multiple partners, disclosure of unprotected sex, and detected infections suggest that it is not just the low-risk worried-well presenting for testing.

THE CURIOUS CASE OF RATES OF GONORRHEA AND CHLAMYDIA AMONG ADOLESCENTS (15-19 YEARS) IN THE UNITED STATES, 2011-2015

Background: Chlamydia and gonorrhea disproportionately affect adolescents and young adults. To describe burden of disease and inform prevention and control activities, we investigated trends in rates of reported cases among adolescents.

Conclusions: After years of decreases, preliminary 2015 data indicate chlamydia and gonorrhea rates are increasing among adolescent males while rates continue to decline among adolescent females. A better understanding of where adolescents seek STI testing and treatment may help inform prevention services for this vulnerable population.

STDS AMONG TRANSGENDER COLLEGE STUDENTS IN THE US: THE ROLE OF EXPERIENCED DISCRIMINATION

Background:  Limited research has explored the relationship between experienced discrimination and STDs among transgender college students in the U.S.; which was the purpose of this investigation.

Methods: We conducted a secondary analysis of the American College Health Association’s Spring 2010 National College Health Assessment-II survey data. A total of 95,712 students from 139 institutions completed the survey. We restricted the sample to include students who were of traditional college age (18-24 years), attended a 4-year institution in the United States, and reported their gender (female, male, or transgender) (n=61,548). A total of 106 students identified as transgender. Because the NCHA-II does not distinguish between trans-men and trans-women in the transgender category, we combined male and female college students into a “cisgender” category for comparison purposes. Multivariate logistic regression analyses were conducted to identify factors associated with an STD (past year) based on gender (cis vs. trans), demographic characteristics (age, race/ethnicity, international status, region of U.S.), behavioral risk factors (sexual, alcohol and poly-drug use), and experienced discrimination (racism, sexism, homophobia) (past year).

Conclusions: Results indicate that experienced discrimination is a significant risk factor for STDs among transgender college students and reinforces the need for stigma reduction/discrimination prevention efforts on campus.