STDs in Men Who Have Sex with Men

The incidence of many STDs in gay, bisexual, and other men who have sex with men (MSM)—including primary and secondary (P&S) syphilis and antimicrobial-resistant gonorrhea—is greater than that reported in women and men who have sex with women only (MSW).1-6 In addition to the negative effects of untreated STDs, elevated STD burden is of concern because it may indicate high risk for subsequent HIV infection. Annual increases in reported STD cases could reflect increased frequency of behaviors that transmit both STDs and HIV (e.g., condomless anal sex), and having an STD increases the risk of acquisition or transmission of HIV.7-14

The relatively high incidence of STD infection among MSM may be related to multiple factors, including individual behaviors and sexual network characteristics.15-17 The number of lifetime or recent sex partners, rate of partner exchange, and frequency of condomless sex each influence an individual’s probability of exposure to STDs.15 However, MSM network characteristics such as high prevalence of STDs, interconnectedness and concurrency of sex partners, and possibly limited access to healthcare also affect the risk of acquiring an STD.15, 18 Furthermore, experiences of stigma – verbal harassment, discrimination, or physical assault based on attraction to men – are associated with increased sexual risk behavior among MSM.19

Disparities among MSM reflect those observed in the general population, with disproportionate incidence of STDs reported among racial minority and Hispanic MSM, MSM of lower socioeconomic status, and young MSM.20-24 The higher burden of STDs among MSM with these characteristics, relative to the general population of MSM, may suggest distinct mixing patterns in their sexual networks, reduced access to screening and treatment, and differential experiences of stigma and discrimination, rather than greater numbers of sexual partners or frequency of condomless sex.15, 21-22, 24-26 Furthermore, disparities may be more pronounced for racial minority and Hispanic MSM who are also unemployed, young, and/or of lower socioeconomic status.26-27

With the exception of reported syphilis cases, nationally notifiable STD surveillance data do not routinely include information on sexual behaviors, and these data are missing for the majority of gonorrhea and chlamydia cases reported to CDC. Therefore, trends in STDs among MSM in the United States are based on findings from sentinel and enhanced surveillance systems. Testing strategies are also evolving to include more extragenital STD screening, which may increase detection of asymptomatic infections. Until recently, testing for gonorrhea and chlamydia in MSM largely focused on detecting urethral infections, which are more likely to be symptomatic than pharyngeal or rectal infections.28

For data reported in this chapter, MSM were defined as men who either reported having one or more male sex partners or who self-reported as gay/homosexual or bisexual. MSW were defined as men who reported having sex with women only or who did not report the sex of their sex partner, but reported that they considered themselves straight/heterosexual. Data presented in this chapter are derived from the National Notifiable Diseases Surveillance System (NNDSS), the Gonococcal Isolate Surveillance Project (GISP), and the STD Surveillance Network (SSuN), a sentinel and enhanced surveillance project established in 2005 to provide supplemental information on STDs.

MSM accounted for 64.3% of reported P&S syphilis cases among women or men with information about sex of sex partners in 2018 (Figure 39). Among men exclusively, MSM accounted for 77.6% of reported cases with information on sex of sex partners. Of MSM P&S syphilis cases, 36.0% were White, 29.0% were Black, and 24.0% were Hispanic (Figure Z). Relative to the percentage of the US population that is White (60.4%), Black (12.5%), and Hispanic (18.3%),29 this represents a higher burden of disease for non-White MSM, which was also evident among MSW and women. In addition, among MSM P&S syphilis cases with known HIV status in 2017, 35.5% were also reported to be HIV-positive (Figure 46). GISP is a national sentinel surveillance system designed to monitor trends in antimicrobial susceptibilities of Neisseria gonorrhoeae strains in the United States.3 Overall, the proportion of isolates collected in selected STD clinics participating in GISP that were from MSM increased steadily, from 3.9% in 1989 to a high of 38.5% in 2017 (Figure BB). In 2018, this proportion was 37.2%. The reason for this increase over time is unclear, but might reflect changes in the epidemiology of gonorrhea or in healthcare-seeking behavior of men infected with gonorrhea. GISP has demonstrated that gonococcal isolates from MSM are more likely to exhibit antimicrobial resistance than isolates from MSW.3, 4 In 2018, the proportion of isolates with elevated azithromycin minimum inhibitory concentrations (MICs) (≥2.0 μg/mL) and elevated ceftriaxone MICs (≥0.125 μg/mL) was higher in isolates from MSM than from MSW (Figure CC). For azithromycin, 8.2% of isolates from MSM had elevated MICs compared to 2.4% in MSW. For ceftriaxone, the proportion was slightly higher at 0.22% in MSM compared to 0.16% in MSW.

Information on the antimicrobial susceptibility criteria used in GISP can be found in Section A2.3 of the Appendix. More information about GISP and additional data can be found at https://www.cdc.gov/std/GISP. 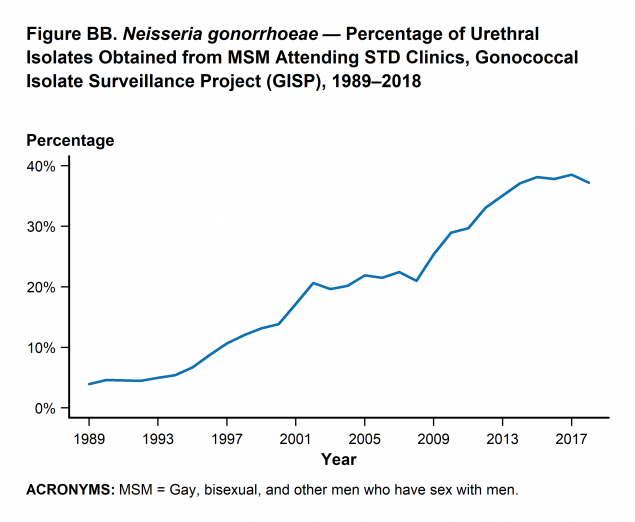 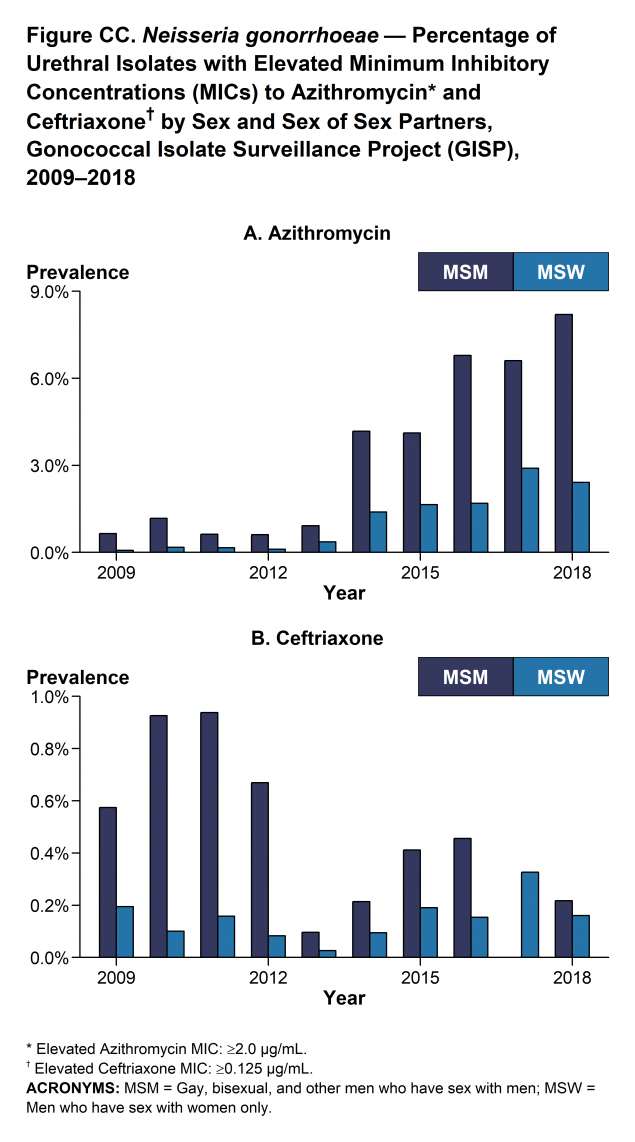 The STD Surveillance Network (SSuN) is an ongoing collaboration of state, county, and city health departments conducting sentinel and enhanced surveillance activities. These include collecting enhanced clinical and behavioral information among all patients attending selected STD clinics, among women aged 15–44 years in selected reproductive health clinics, and conducting enhanced patient and provider investigations on a representative sample of gonorrhea cases diagnosed and reported from all reporting sources in their jurisdiction (See Section A2.2 of the Appendix). Estimated rates of reported gonorrhea among MSM based on SSuN data are provided in the Gonorrhea section of the National Profile (Figure 25).

Urethral and Extragenital Gonorrhea and Chlamydia in STD Clinics, 2018 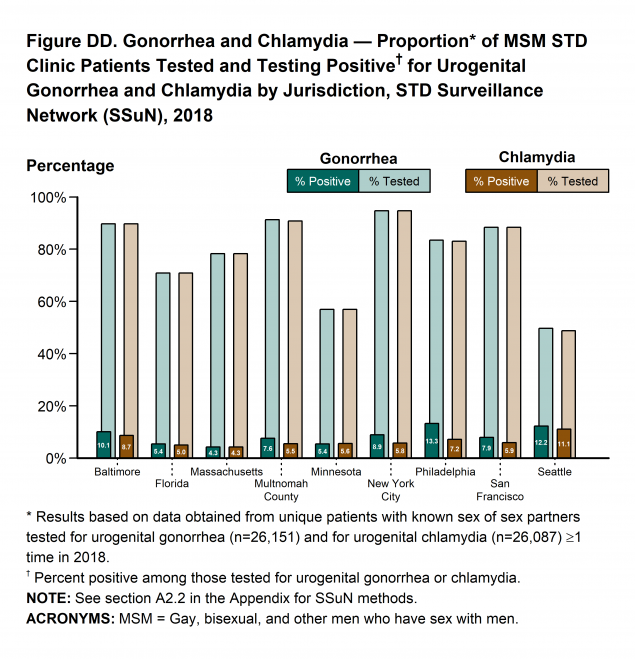 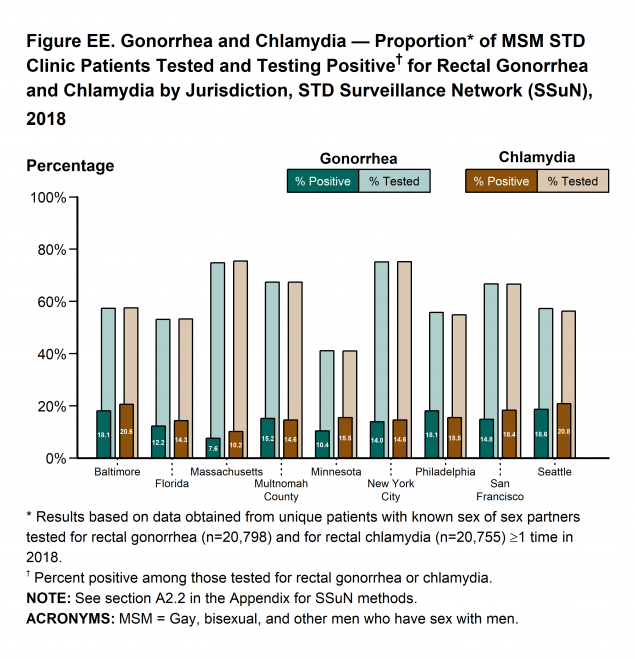 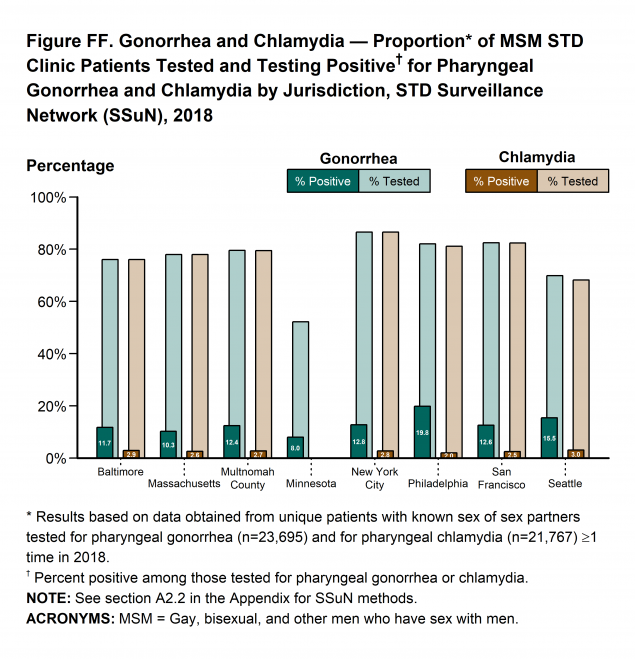 Among HIV-positive MSM attending SSuN STD clinics in seven of the 10 SSuN jurisdictions in 2018, urogenital chlamydia positivity was 6.1% and urogenital gonorrhea positivity was 12.7% (compared to 6.7% and 7.6%, respectively, among HIV-negative MSM) (Figure GG). Among HIV-positive MSM, 7.0% were diagnosed with P&S syphilis compared to 3.4% of HIV-negative MSM. Percentages represent the overall average of the mean value by jurisdiction. 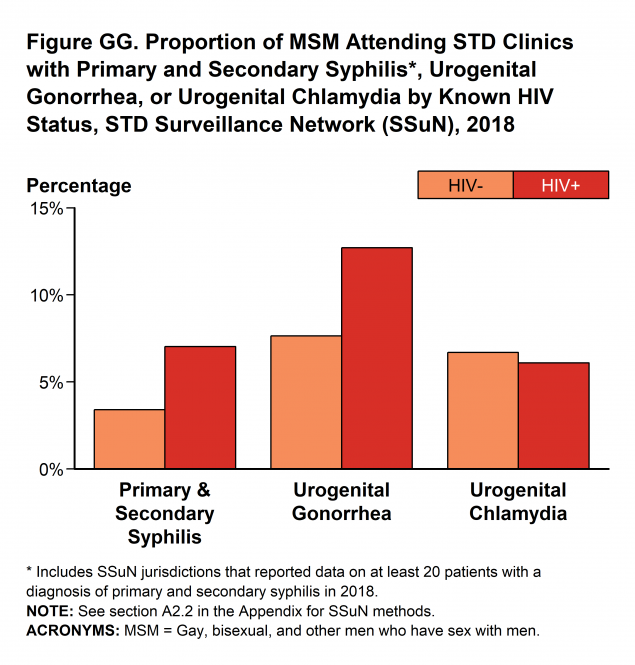 An analysis of data from 27 clinics participating in SSuN observed significant declines in prevalence of anogenital warts during 2010–2016 among MSM of all ages.38 Although some of the observed declines may be due to HPV vaccination, changes over time in attributes of STD clinic patients or clinical practices, such as a decrease in physical examinations resulting in fewer anogenital warts diagnoses, may partially account for these findings.

The number of reported P&S syphilis cases among MSM continued to rise in 2018, and the majority of P&S syphilis cases remained among MSM. Furthermore, the proportion of GISP isolates with elevated MICs to antimicrobials currently used to treat gonorrhea was higher among MSM than among MSW. Beyond STD burden in the general MSM population, the data indicated heterogeneity of STD prevalence among MSM according to geography, race/Hispanic ethnicity, and HIV status. State-specific P&S syphilis rate estimates among MSM varied from 108.9 to 962.3 cases per 100,000 MSM. Reported P&S syphilis was disproportionately prevalent among Black and Hispanic MSM, and data from MSM who attended SSuN clinics suggested that P&S syphilis and urogenital gonorrhea may be more prevalent among MSM living with diagnosed HIV infection than among HIV-negative MSM.