STDs in Adolescents and Young Adults

Incidence and prevalence estimates suggest that young people aged 15–24 years acquire half of all new STDs1 and that one in four sexually-active adolescent females has an STD, such as chlamydia or human papillomavirus (HPV).2 Compared with older adults, sexually-active adolescents aged 15–19 years and young adults aged 20–24 years are at higher risk of acquiring STDs for a combination of behavioral, biological, and cultural reasons. For some STDs, such as chlamydia, adolescent females may have increased susceptibility to infection because of increased cervical ectopy. Cervical ectopy refers to columnar cells, which are typically found within the cervical canal, located on the outer surface of the cervix. Although this is a normal finding in adolescent and young adult females, these cells are more susceptible to infection. The higher prevalence of STDs among adolescents may also reflect multiple barriers to accessing quality STD prevention and management services, including inability to pay, lack of transportation, long waiting times, conflict between clinic hours and work and school schedules, embarrassment attached to seeking STD services, method of specimen collection, and concerns about confidentiality (e.g., Explanation of Benefits for services received mailed to parents or guardians).3

Traditionally, intervention efforts have targeted individual level factors associated with STD risk which do not address higher-level factors (e.g., peer norms and media influences) that may also influence behaviors.4 Interventions for at-risk adolescents and young adults that address underlying aspects of the social and cultural conditions affecting sexual risk-taking behaviors are needed, as are strategies designed to improve the underlying social conditions themselves.5,6 In addition, in designing STD programs, consideration should be given to the needs of adolescent and young adult populations including extended clinic hours, optimizing privacy in waiting rooms, and urine based specimen collection.3 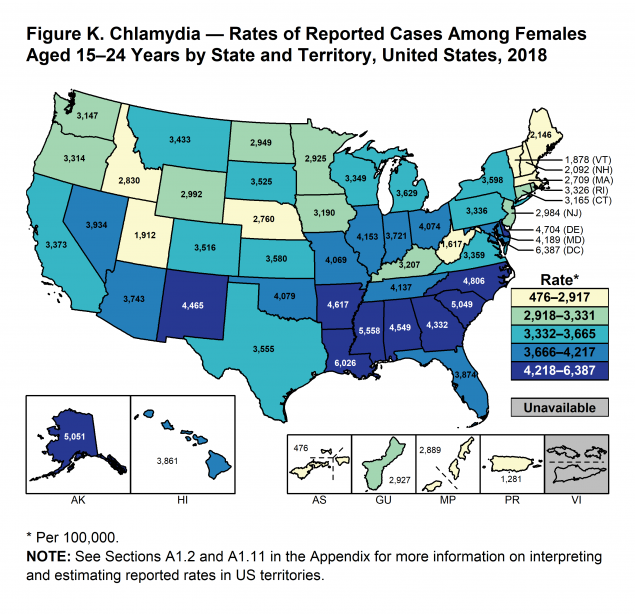 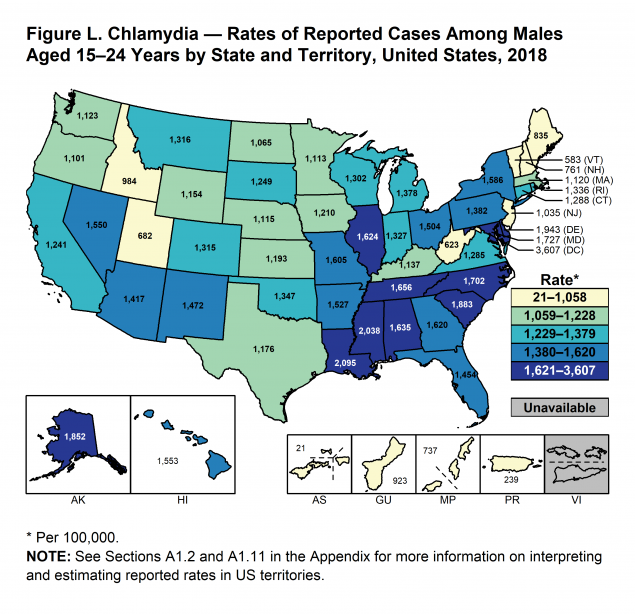 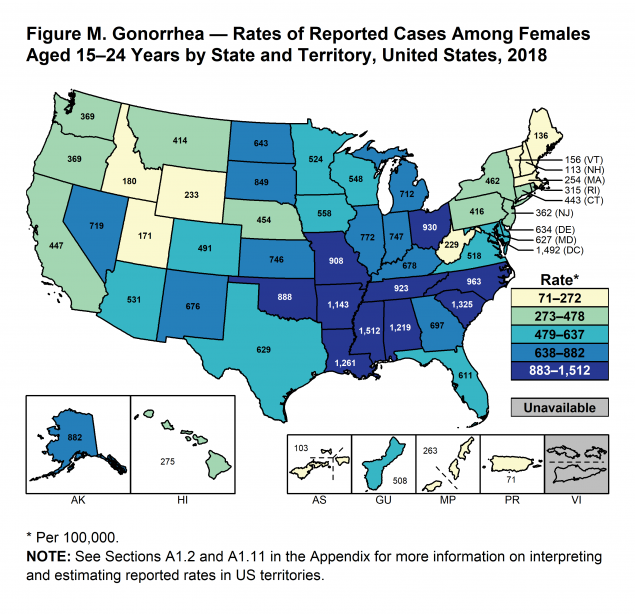 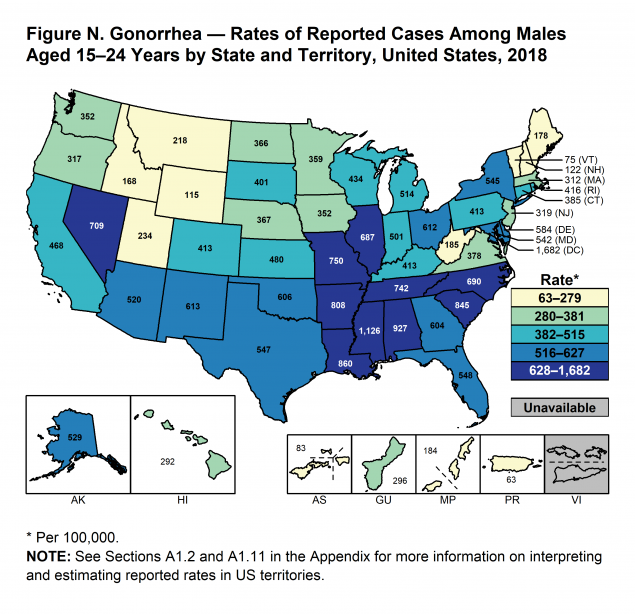 Human papillomavirus (HPV) is a common sexually transmitted infection in the United States.1 Starting in 2006, HPV vaccines have been recommended for routine use in United States females aged 11–12 years, with catch-up vaccination through age 26.7,8  Since late 2011, routine use of the HPV vaccine has been recommended for males aged 11–12 years, with catch-up vaccination through age 21;8-10 this age limit was recently extended to 26 years.11 Vaccination through age 26 has been recommended for gay, bisexual, and other men who have sex with men (MSM) and persons who are immunocompromised (including those infected with HIV).8 In October 2018, the Food and Drug Administration (FDA) extended licensing approval of the vaccine for women and men aged 27–45 years,12 and in June 2019, the CDC’s Advisory Committee on Immunization Practices (ACIP) recommended that unvaccinated adults aged 27–45 years discuss receiving the HPV vaccine with their health care providers.11 For more information on HPV vaccination, see Other STDs.

A recent meta-analysis that included data from over 60 million individuals from 14 high-income countries, including the United States, showed a substantial impact of HPV vaccination on: genital HPV infections among adolescent girls and young women; high-grade cervical lesions among young women; and anogenital warts among adolescent boys and girls, and among young men and women.13 Cervicovaginal prevalence of any quadrivalent HPV vaccine type has been estimated for civilian, non-institutionalized females aged 14–34 years using data from the National Health and Nutrition Examination Survey (NHANES; see Section A2.4 in the Appendix).14 Prevalence decreased significantly from 2003–2006 (the pre-vaccine era) to 2011–2014 in specimens from females aged 14–19 years and 20–24 years, the age groups most likely to benefit from HPV vaccination.

Health-care claims data from adolescents and adults with employer-provided private health insurance in the United States were used to examine the population effectiveness of HPV vaccination on two clinical sequelae of HPV infection: high-grade histologically-detected cervical intraepithelial neoplasia grades 2 and 3 (CIN2+),15 and anogenital warts.16 Prevalence of CIN2+ and of anogenital warts decreased significantly during 2007–2014 among females aged 15–19 and 20–24 years (Figures 51 and 52A); prevalence of anogenital warts also decreased significantly during 2009–2014 among women aged 25–29 years (Figure 52A). These declines provide ecologic evidence of population effectiveness of HPV vaccination in females. Anogenital wart prevalence also decreased significantly during 2009–2014 among men aged 20–24 years (Figure 52B); these declines among young men are consistent with herd protection from vaccination among females.

For more information on HPV infections, see Other STDs.

Herpes simplex virus (HSV) is among the most prevalent of sexually transmitted infections.1,17 Most genital HSV infections in the United States are caused by HSV type 2 (HSV-2), while HSV type 1 (HSV-1) infections are typically orolabial and acquired during childhood.18,19 NHANES data have shown that among adolescents aged 14–19 years, HSV-1 seroprevalence has significantly decreased by almost 23%, from 39.0% during 1999–2004 to 30.1% during 2005–2010, indicating declining orolabial infection in this age group.19 HSV-2 seroprevalence in this age group was much lower in both time periods.19

The National Job Training Program (NJTP) is an educational program for socioeconomically disadvantaged youth aged 16–24 years and is administered at more than 100 sites throughout the country. The NJTP screens participants for chlamydia and gonorrhea within two days of entry to the program. All of NJTP’s chlamydia screening tests and the majority of gonorrhea screening tests are conducted by a single national contract laboratory (Center for Disease Detection, LLC, San Antonio, Texas).

To increase the stability of the 2018 estimates, chlamydia or gonorrhea prevalence data are presented when valid test results for 100 or more students per year are available for the population subgroup and state. Additional information about NJTP can be found in Section A2.1 in the Appendix. 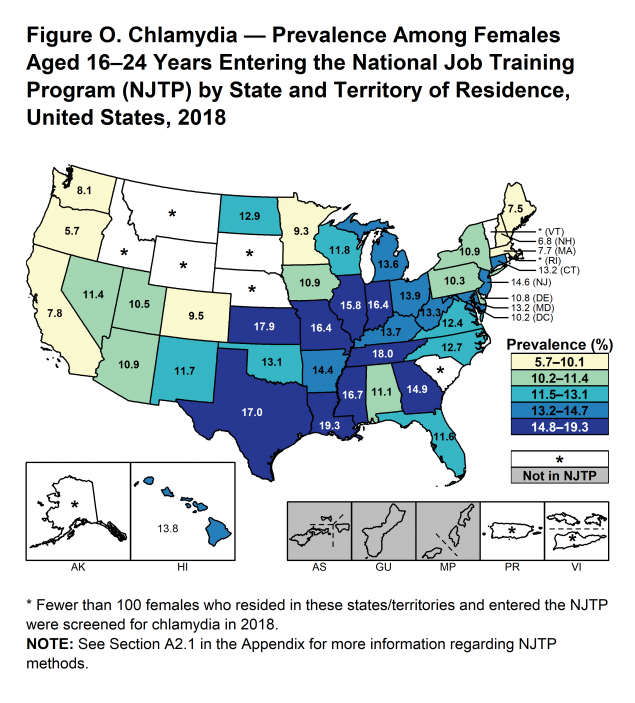 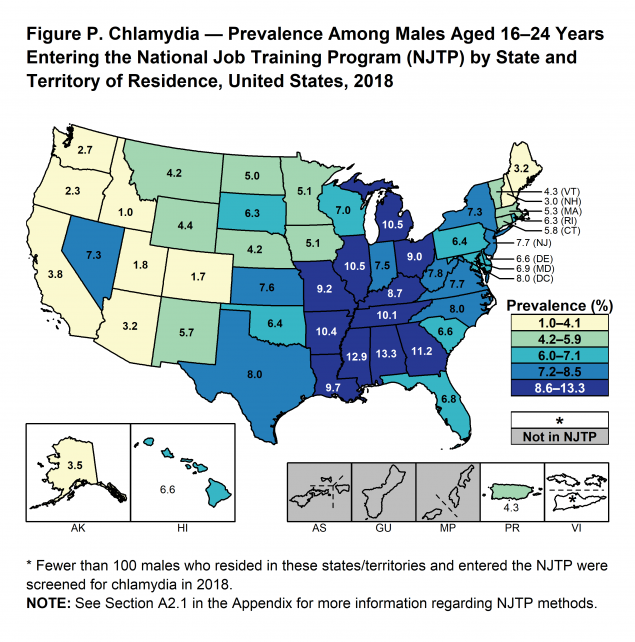 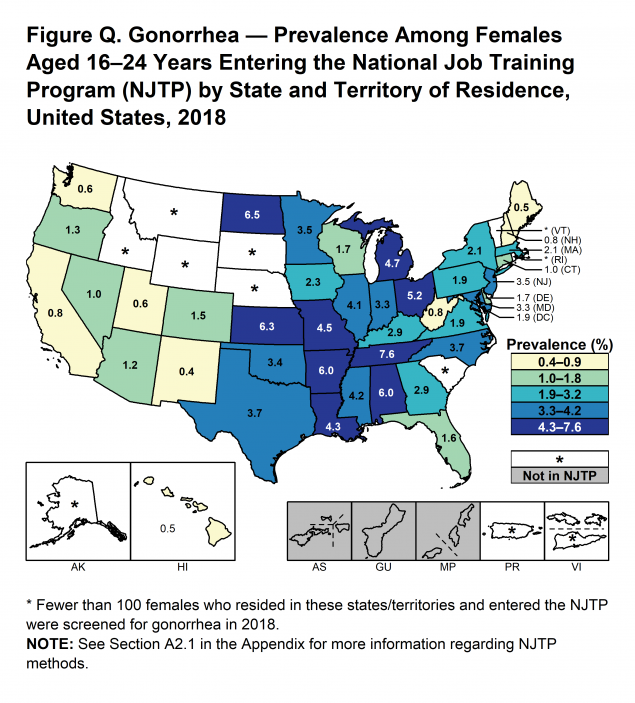 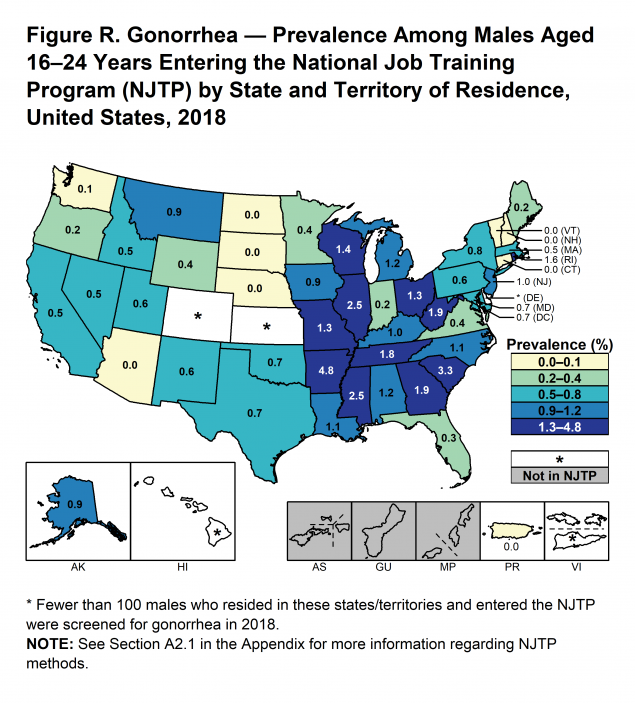