Gonorrhea is the second most commonly reported notifiable disease in the United States. Infections due to Neisseria gonorrhoeae, like those resulting from Chlamydia trachomatis, are a cause of pelvic inflammatory disease (PID) in the United States. PID can lead to serious outcomes in women, such as tubal infertility, ectopic pregnancy, and chronic pelvic pain. In addition, epidemiologic and biologic studies provide evidence that gonococcal infections facilitate the transmission of HIV infection.1 Together, sexual behavior and community prevalence can increase the risk of acquiring gonorrhea. Social determinants of health, such as socioeconomic status, discrimination, and access to quality health care, may contribute to the burden of gonorrhea in a community.2

N. gonorrhoeae has progressively developed resistance to each of the antimicrobials used for treatment of gonorrhea. Declining susceptibility to cefixime (an oral cephalosporin antibiotic) resulted in a change to the CDC treatment guidelines in 2015 to the current CDC-recommended regimen of ceftriaxone (an injectable cephalosporin) and azithromycin.3 The emerging threat of cephalosporin resistance highlights the need for continued surveillance of N. gonorrhoeae antimicrobial susceptibility.

The combination of persistently high gonorrhea morbidity in some populations and the threat of cephalosporin-resistant gonorrhea reinforces the need to better understand the epidemiology of gonorrhea.

Although gonorrhea case reporting is useful for monitoring disease trends, the number of gonorrhea cases reported to CDC is affected by many factors in addition to the actual occurrence of the infection within the population. Changes in the burden of gonorrhea may be masked by changes in screening practices (e.g., screening for chlamydia with tests that also detect N. gonorrhoeae infections or increased screening at extra-genital anatomic sites), the use of diagnostic tests with different test performance (e.g., the broader use of nucleic acid amplification tests [NAATs]), and changes in reporting practices. As with other STDs, the reporting of gonorrhea cases to CDC is incomplete.4 For these reasons, supplemental data on gonorrhea prevalence in persons screened in a variety of settings are useful in assessing the burden of disease in selected populations. 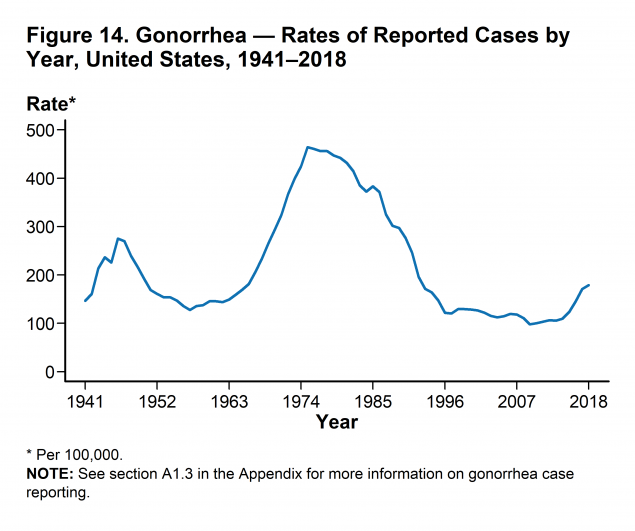 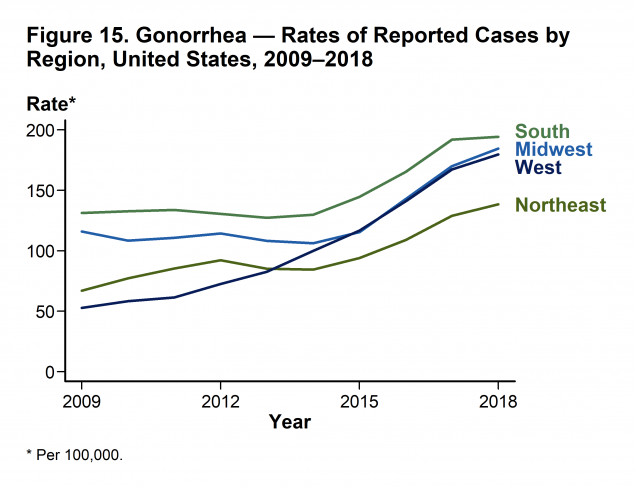 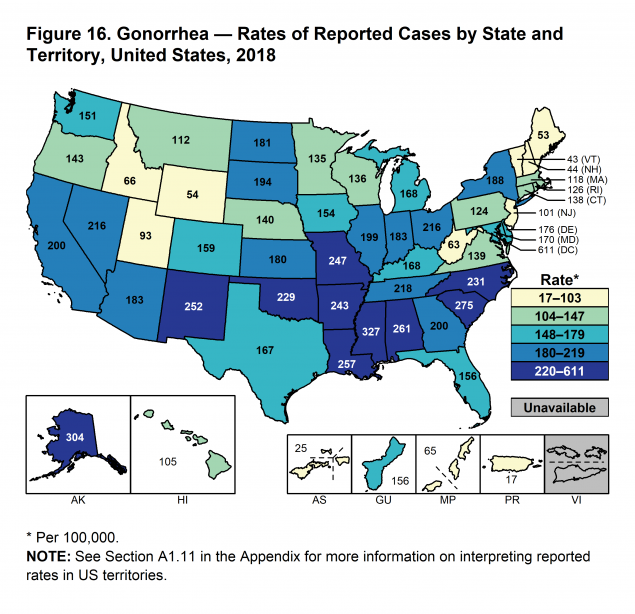 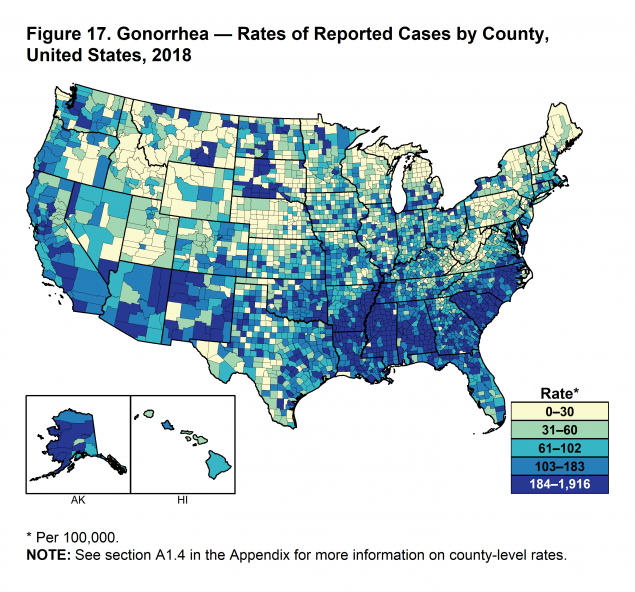 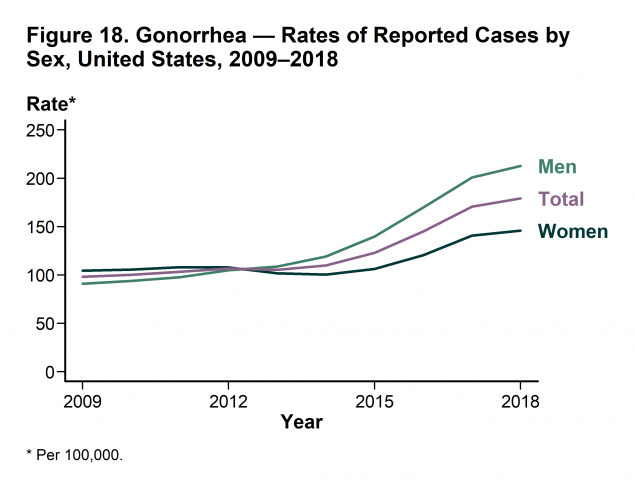 Gonorrhea by Region and Sex 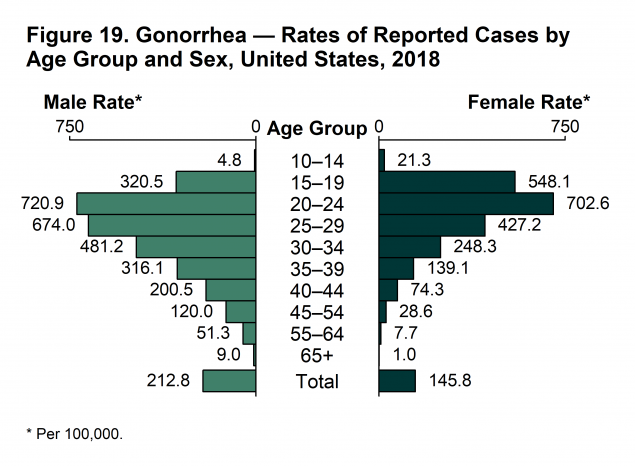 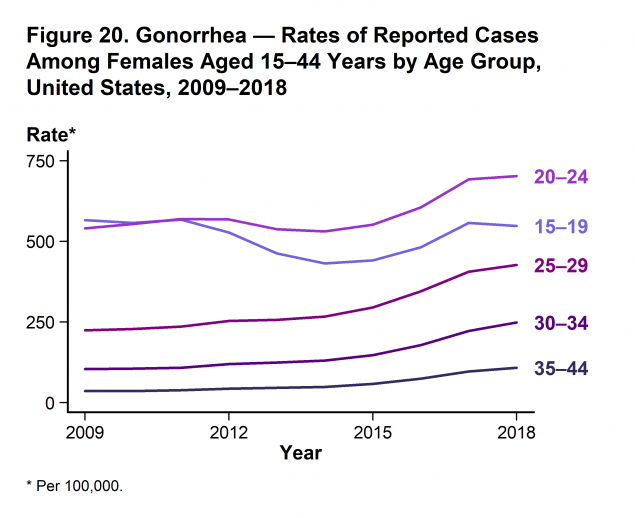 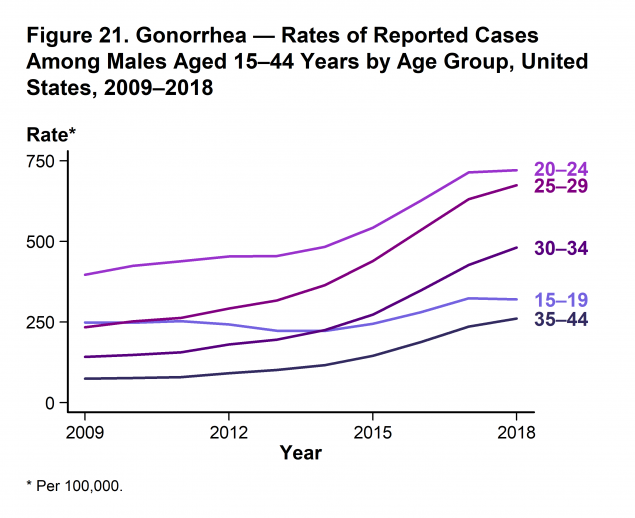 More information on gonorrhea rates among race/Hispanic ethnicity groups can be found in the Special Focus Profiles, STDs in Racial and Ethnic Minorities. 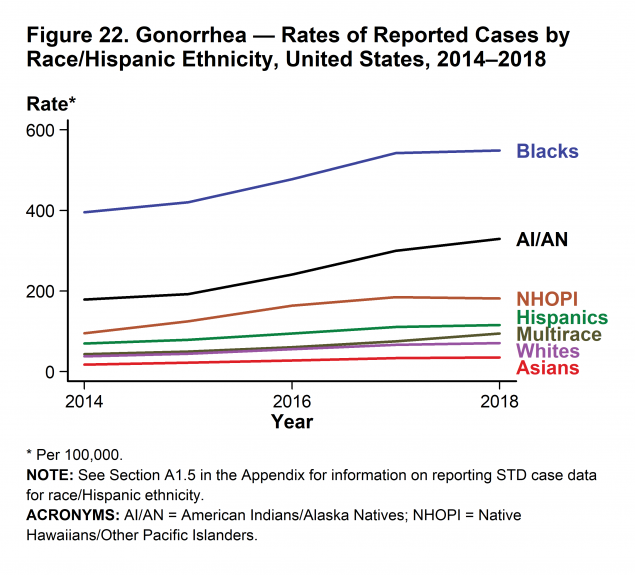 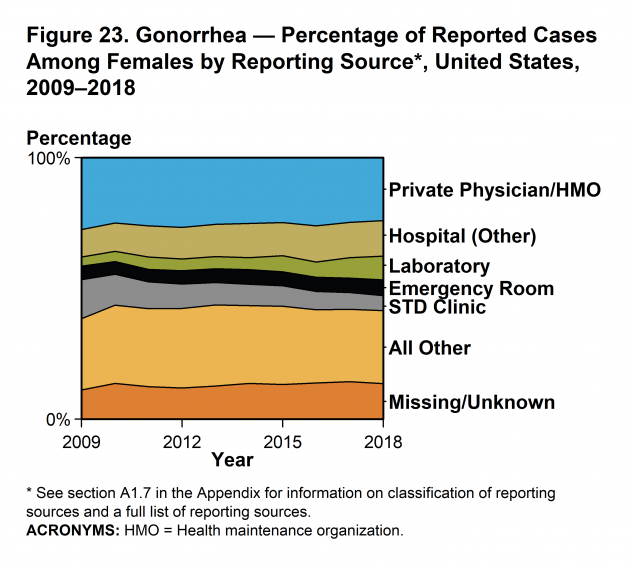 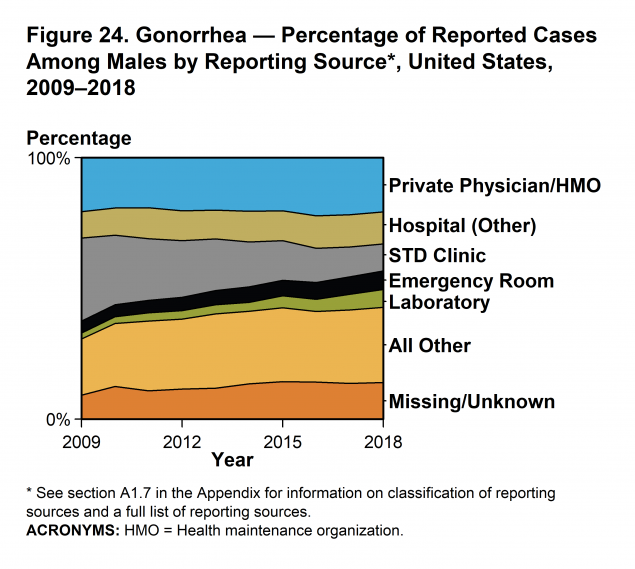 The STD Surveillance Network (SSuN) is an ongoing collaboration of state, county, and city health departments conducting sentinel and enhanced surveillance activities. These include collecting enhanced clinical and behavioral information among all patients attending selected STD clinics, among women aged 15–44 years in selected reproductive health clinics, and conducting enhanced patient and provider investigations on a representative sample of gonorrhea cases diagnosed and reported from all reporting sources in their jurisdiction.

Enhanced gonorrhea case report data for 2018 were obtained from Cycle 3 of SSuN, which includes 10 jurisdictions randomly sampling all cases reported in their jurisdictions. In 2018, SSuN collaborators interviewed 6,842 gonorrhea cases, representing 4.3% of all cases reported from participating jurisdictions. The estimated burden of disease represented by men who have sex with men (MSM; including men who have sex with both men and women), men who have sex with women only (MSW), and women varied substantially across collaborating sites based on weighted analysis (Figure 25). San Francisco had the highest proportion of cases estimated to be MSM (86.4%), while Baltimore had the lowest proportion of MSM cases (20.1%). In total, across all SSuN sites, 42.5% of gonorrhea cases were estimated to be among MSM, 25.1% among MSW, and 32.4% among women.

Collaborating SSuN jurisdictions also conduct sentinel surveillance on all patients seeking care in selected STD clinics. In 2018, the proportion of STD clinic patients who tested positive for gonorrhea varied by sex and sex of sex partners, as well as age group (Figure 27). The overall prevalence, represented by the average of the mean value by nine of the 10 SSuN jurisdictions, where data was available, was 20.5% for MSM, 9.1% for MSW, and 5.4% for women. Among those attending these clinics, MSM disproportionately had higher positivity rates when compared to MSW and women in all age groups. Although overall gonorrhea positivity rates declined with increasing age for women, MSM, and MSW, a slower decline by age was observed in MSM <40 years of age.

Additional information about the SSuN methodology can be found in Section A2.2 of the Appendix. 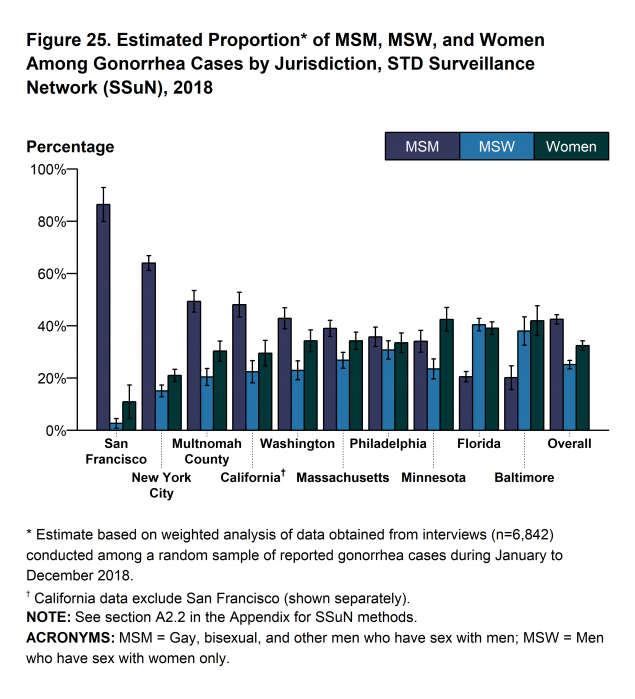 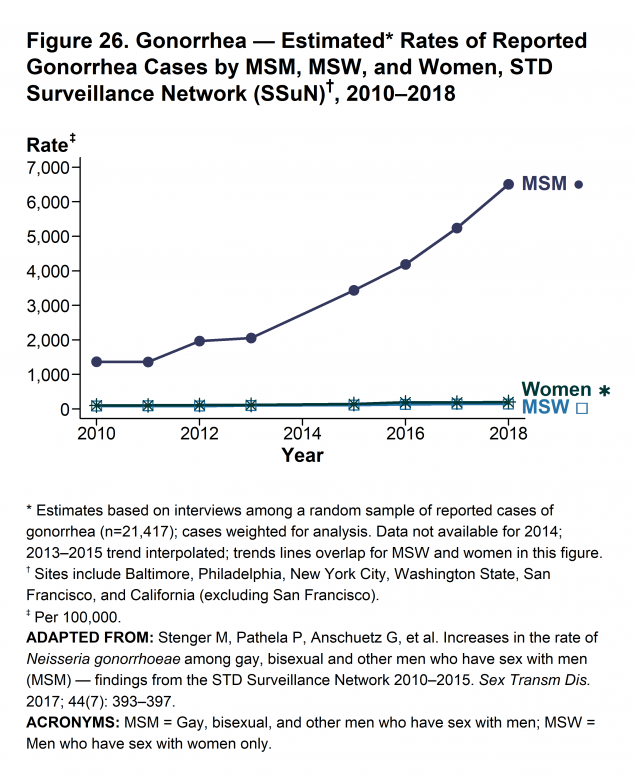 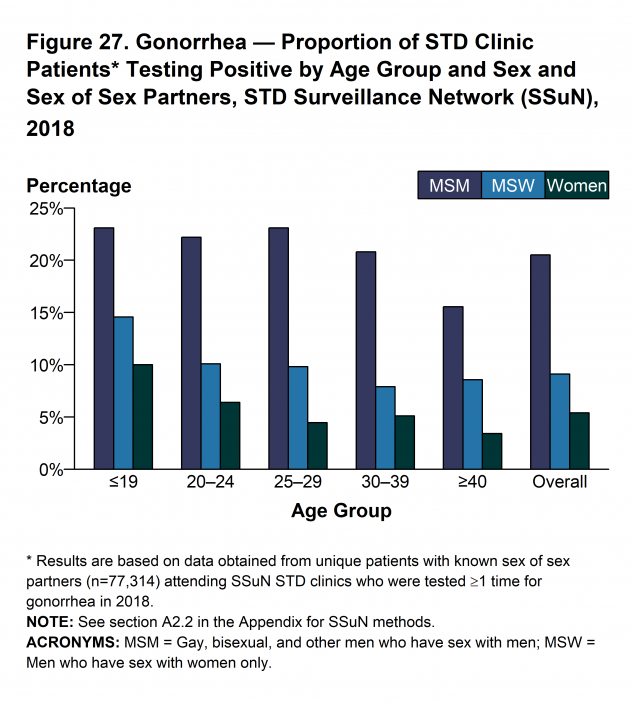 Antimicrobial resistance remains an important consideration in the treatment of gonorrhea.3, 7-9 In 1986, the Gonococcal Isolate Surveillance Project (GISP), a national sentinel surveillance system, was established to monitor trends in antimicrobial susceptibilities of urethral N. gonorrhoeae strains in the United States.7 Data are collected from selected STD clinic sentinel sites and from regional laboratories (Figure 28).

Information on the antimicrobial susceptibility criteria used in GISP can be found in Section A2.3 in the Appendix. More information about GISP and additional data can be found at: https://www.cdc.gov/std/GISP. 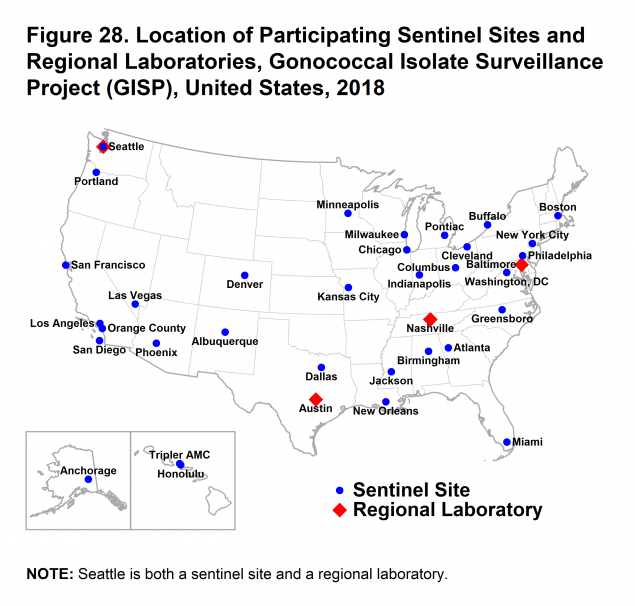 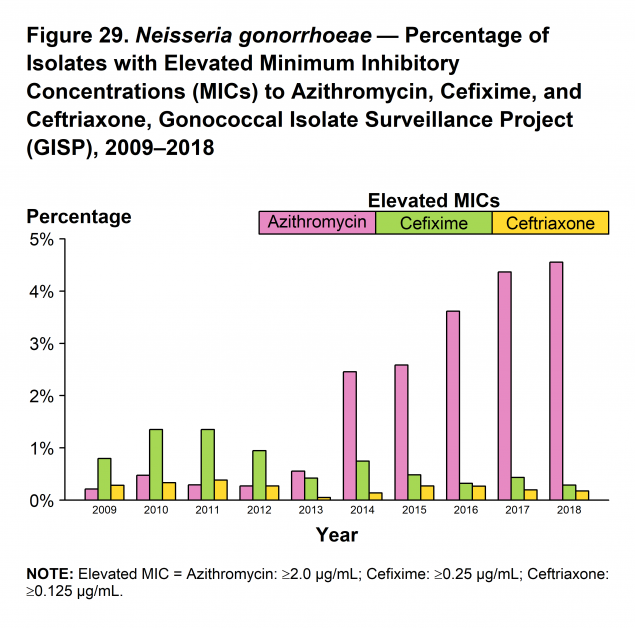 Susceptibility to Other Antimicrobials

In 2018, 31.2% of isolates collected from GISP sites were resistant to ciprofloxacin, 25.6% to tetracycline, and 13.7% to penicillin (Figure 31). Although these antimicrobials are no longer recommended for treatment of gonorrhea, the resistance phenotypes remain common. The different susceptibility patterns seen in GISP in 2018 are shown in Figure 32. Panel A demonstrates the percentage of isolates with resistance or elevated MICs to various numbers of antimicrobials. Panel B further highlights the specific combinations of resistance or elevated MICs across antimicrobials (vertical bars). The overall percentage of reduced susceptibility for each antimicrobial (horizontal bars) are the same percentages seen for 2018 in Figure 31. Of all the isolates collected in GISP in 2018, 4.5% demonstrated resistance or elevated MICs to at least three antibiotics tested with the majority of the combinations including tetracycline, penicillin and ciprofloxacin; no isolates with elevated azithromycin MICs had elevated ceftriaxone MICs (Figure 32). In 2018, 48.7% of all tested isolates were susceptible to all antibiotics tested. 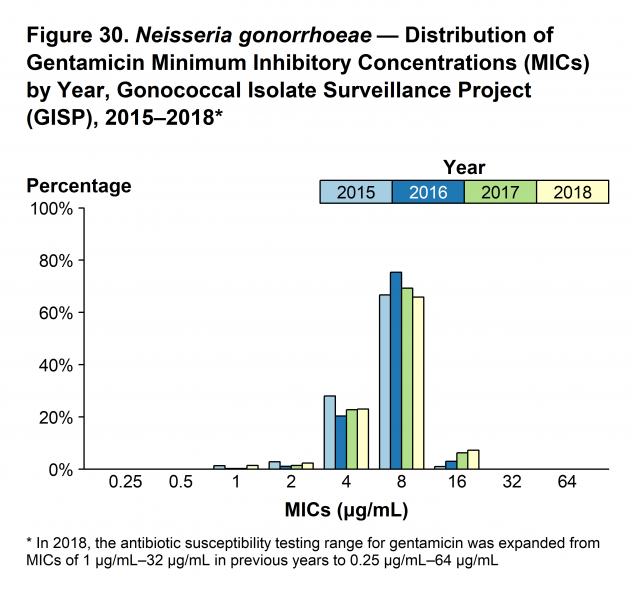 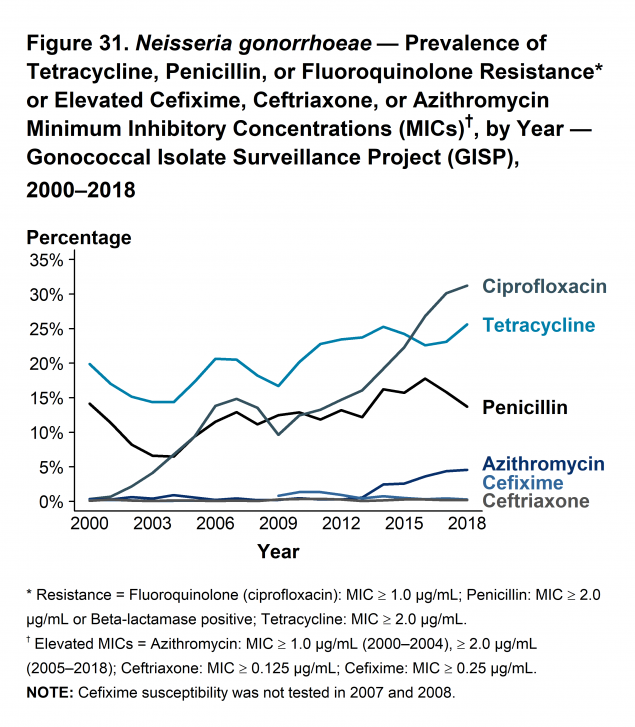 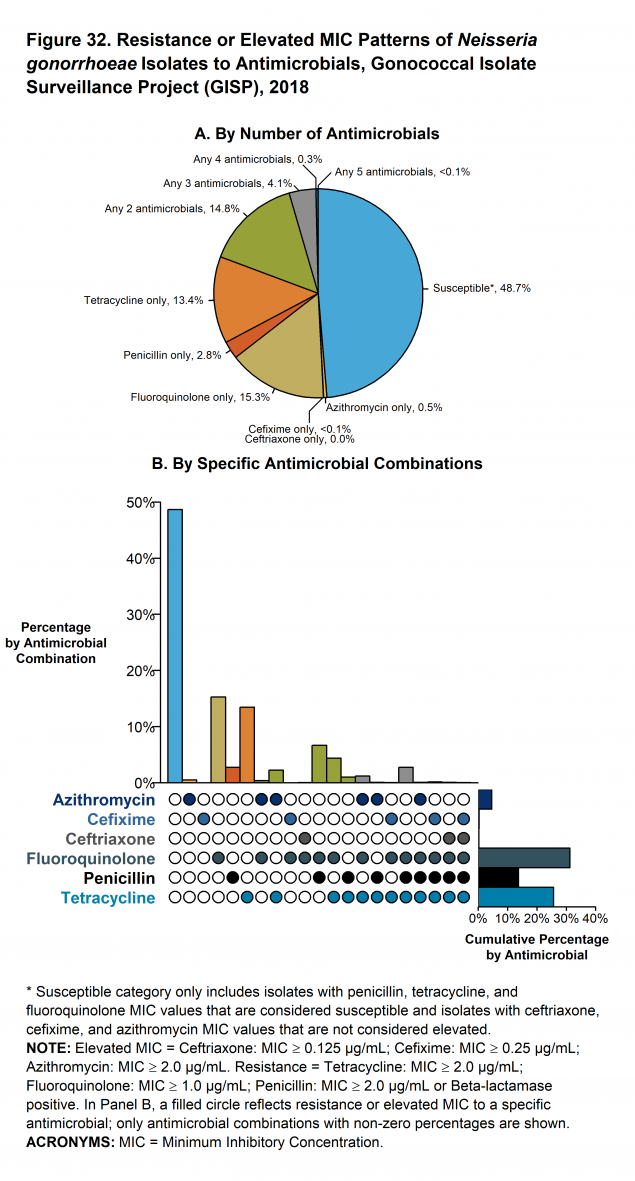 Antimicrobial Treatments Given for Gonorrhea 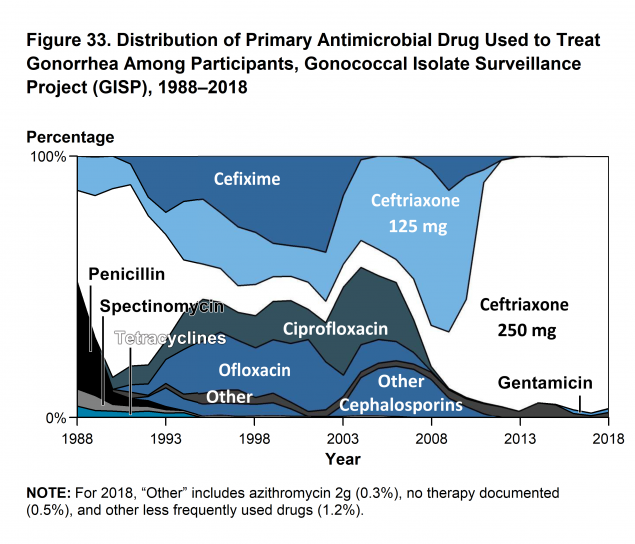 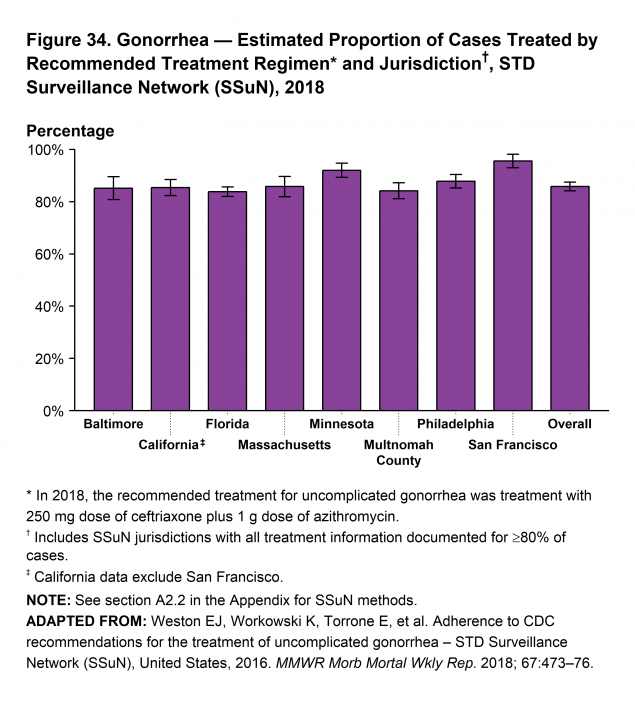 More information about gonorrhea in race/Hispanic ethnicity groups, females of reproductive age, adolescents, young adults, and MSM can be found in the Special Focus Profiles.

The national rate of reported gonorrhea cases reached a historic low in 2009, but increased each year during 2009–2012. After a temporary decrease in 2013, the gonorrhea rate increased again during 2014–2018. This increase was largely attributable to increases among men. Enhanced surveillance data suggest the largest increases are among MSM. However, high gonorrhea rates persist in certain geographic areas, among adolescents and young adults, and in some racial/Hispanic ethnicity groups. Continued surveillance for antimicrobial resistant gonorrhea is critical to monitor for the emergence of reduced susceptibility and resistance to cephalosporins and azithromycin.