Bacterial species may be differentiated on the basis of their ability to reduce nitrate to nitrite or nitrogenous gases. Among the Neisseriaceae of human origin, strains of Neisseria mucosa, Moraxella catarrhalis, and Kingella denitrificans reduce nitrate. Strains of M. catarrhalis and K. denitrificans have been misidentified as N. gonorrhoeae. The nitrate reduction test permits differentiation between these species which are nitrate positive and N. gonorrhoeae (nitrate-negative). The reduction of nitrate may be coupled to anaerobic respiration in some species.

The biochemical pathway involved in nitrate reduction is shown in Figure 1. Nitrate is reduced to nitrite which may then be reduced to nitric oxide, nitrous oxide, or nitrogen (Figure 1).

The nitrate reduction test is based on the detection of nitrite in the medium after incubation with an organism. If present in the medium, nitrite will react with sulfanilic acid (Nitrate reagent A) to form a colorless complex (nitrite-sulfanilic acid). This complex will then yield a red precipitate (prontosil) when nitrate reagent B (alpha-naphthylamine) is then added to the test as shown in Figure 2.

Figure 2. Diagrammatic representation of the detection of nitrite in medium.

Any test medium that gives a negative result after the addition of the nitrate reagents must be further tested to determine which of the two interpretations is accurate.

A successful nitrate reduction test is dependent on performing the test under the correct conditions.

The nitrate reduction test is performed in a medium containing 0.2% potassium nitrate. The medium is inoculated heavily with a pure culture of the suspect organism and incubated at 35C to 36.5C for 48 h. in an incubator with or without supplemental carbon dioxide.

An organism may be reported as nitrate-positive if a red color develops in the medium after Nitrate reagents A and B are added to the medium, indicating that the organism has reduced nitrate to nitrite.

The absence of a red color after the addition of both reagents does not automatically mean that the organism is unable to reduce nitrate. Strains may have reduced the nitrate to nitrite, and then reduced the nitrite completely to nitrogenous gases which are not detected when Nitrate reagents A and B are added to the medium. If the medium does not change color after the addition of sulfanilic acid and alpha-naphthylamine, a small amount (“knife point”) of zinc dust is added to the incubated medium. The zinc dust will catalyze the reduction of nitrate to nitrite chemically. Thus, if the nitrate has not been reduced by the organisms, i.e., they are nitrate-negative, it will be reduced by the zinc dust and a red color will develop in the incubated medium within 15 min. If no color develops in the incubated medium after the addition of zinc dust, the organisms have not only reduced nitrate to nitrite, but have reduced nitrite to nitrogenous gases; these organisms are also nitrate-positive.

Although nitrate medium is supplied with inverted Durham tubes to detect gas production, gas production is not recorded for Neisseria species. Although some species may reduce nitrate beyond nitrite to nitrogenous gases, gas may not accumulate in the tube. The accumulation of gas is dependent on the rate at which it is produced. When gas is produced very slowly, it may dissolve in the medium and not accumulate in the Durham tube.

Optimum specimen: A pure culture of a suspect gram negative, oxidase-positive diplococcus (Neisseria spp. or M. catarrhalis) on chocolate agar incubated in a carbon dioxide-enriched atmosphere at 35C to 36.5C for 18 to 24 h.

Unacceptable specimen: Cultures of isolates on chocolate agar incubated in a carbon dioxide- enriched atmosphere at 35C to 36.5C for more than 24 h.

Stability of specimen: Detection of nitrate reduction for Neisseria and related species is dependent on the presence of preformed enzymes.

Reagents: Sulfanilic acid solution (Nitrate reagent A): 0.8% in 5N acetic acid
Chemical Name: 4-aminobenzene sulfonic acid
Store Nitrate reagent A at 15C to 30C (room temperature) for up to 3 months, in dark. Reagents may be stored in dark brown glass containers; bottles may be wrapped in aluminum foil to ensure darkness.

Alpha-Naphthylamine solution (Nitrate reagent B): 0.6% in 5N acetic acid
Chemical Name: N,N-dimethyl-1 naphthylamine
Store Nitrate reagent B at 2C to 8C (refrigerated) for up to 3 months, in dark. Reagents may be stored in dark brown glass containers; bottles may be wrapped in aluminum foil to ensure darkness.

Warning: Acetic acid is corrosive. Contact with skin may cause blisters and burns. In case of contact, flush eyes and skin immediately with plenty of water (for at least 15 min.)

QC strains are stored at -70C in a solution of tryptic soy broth containing 20% glycerol. Reactions of control strains should be confirmed at the time frozen stocks are prepared. QC strains may be stored at -70C for up to 2 years. 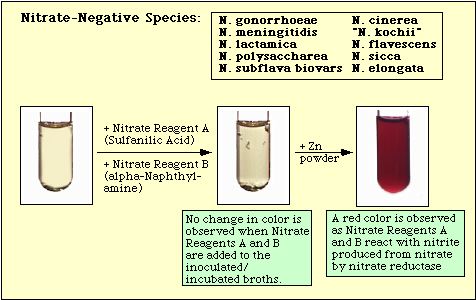 The nitrate reduction test may give false-negative or false positive results if the medium is not produced accurately or the test is not performed accurately. The reaction in this test is dependent upon a number of factors.

No identification of genus or species can be made on the basis of the nitrate reduction test alone.