Your body needs a small amount of sodium to work properly, but too much sodium is bad for your health. Eating too much sodium can increase your blood pressure and your risk for heart disease and stroke. Together, heart disease and stroke kill more Americans each year than any other cause. Reducing your sodium intake can help lower your blood pressure and improve the health of your heart.

Most People Eat Too Much Sodium

Americans consume more than 3,400 milligrams (mg) of sodium each day, on average. This is well above the 2020-2025 Dietary Guidelines for Americans recommendation of less than 2,300 mg of sodium each day as part of a healthy eating pattern.

Though the words “salt” and “sodium” are often used interchangeably, they are not the same. “Salt” is sodium chloride which is table salt. Sodium chloride is 40% sodium and 60% chloride. One teaspoon of table salt contains about 2,400 mg of sodium.

Sodium is a mineral found in many foods, including monosodium glutamate (MSG), sodium bicarbonate (baking soda) and sodium nitrate (a preservative).

Sodium From Everyday Foods Adds Up

More than 40% of the sodium we eat each day comes from just 10 types of foods, with breads and rolls as the top source. Eggs and omelets are the tenth leading source of sodium. 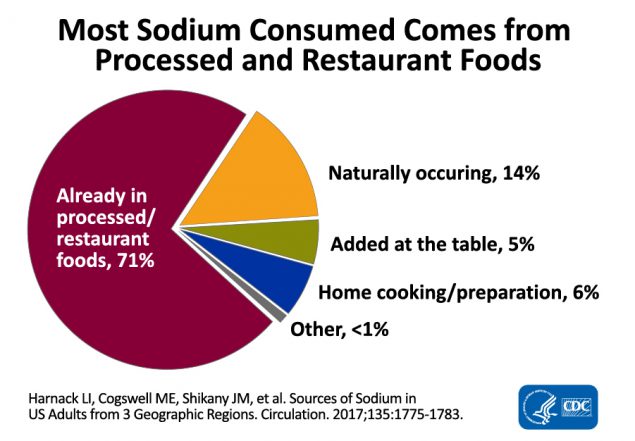 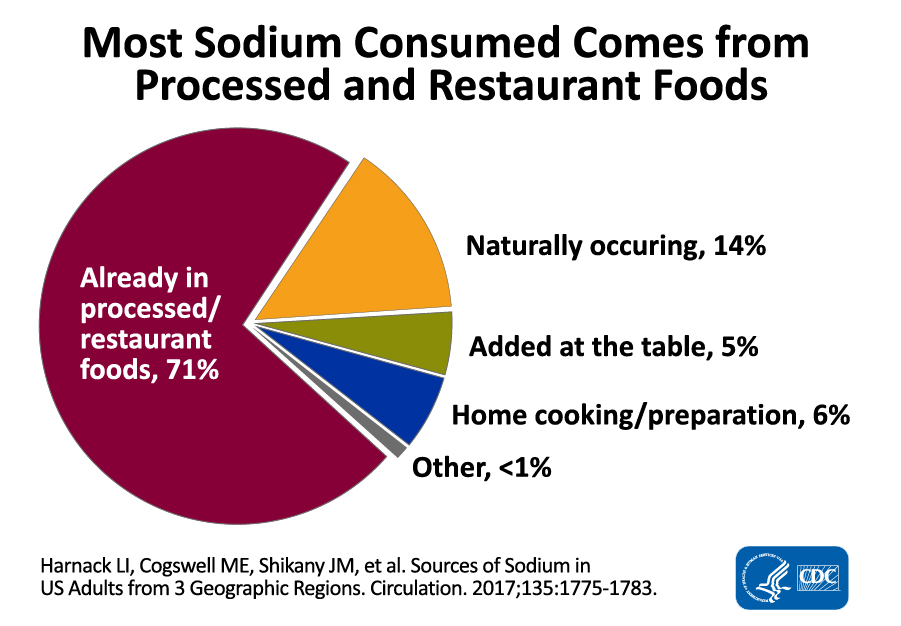 Different brands of the same foods may have different sodium levels. For example, sodium in chicken noodle soup can vary by as much as 840 mg per serving in different brands. 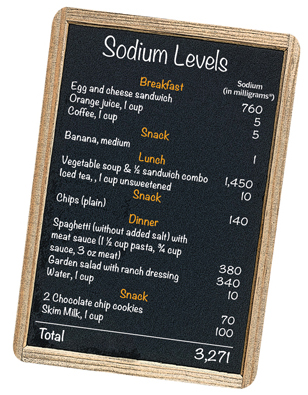 Why Is Sodium Added to Packaged Food?

Most of the sodium we eat (about 70%) is added to packaged and restaurant food before we purchase them. Sodium  enhances flavor, preserves freshness, and improves texture and appearance. For many products, those effects can be accomplished with lower levels than are currently being used.

Many US food products already contain lower amounts of sodium when they are sold in other countries. This indicates that food manufacturers could introduce lower sodium versions of popular products in the United States. Additionally, sodium levels in similar US products vary greatly across—and even within—brands, indicating consumers’ willingness to buy less salty products.

Although many food manufacturers express concern about the altered taste of lower sodium products, salt is an acquired taste. Some research indicates that consumers—and their taste buds—can adapt to the taste of lower sodium foods. Certain studies found that when a reduced-sodium version of a popular food is served, the typical consumer adds less than 20% of the removed sodium back. This behavior suggests that individuals are relatively comfortable with gradual reductions of sodium in products.