CDC is collaborating with public health officials in many states and the United States Food and Drug Administration (FDA) to investigate a multistate outbreak of human infections due to Salmonella serotype Typhimurium.

Among the persons with confirmed, reported dates available, illnesses began between September 1, 2008 and March 31, 2009. Patients range in age from < 1 to 98 years. The median age of patients is 16 years which means that half of ill persons are younger than 16 years. 21% are age < 5 years, 17% are > 59 years. 48% of patients are female. Among persons with available information, 24% reported being hospitalized. Infection may have contributed to nine deaths: Idaho (1), Minnesota (3), North Carolina (1), Ohio (2), and Virginia (2).

On November 10, 2008, CDC’s PulseNet staff noted a small and highly dispersed multistate cluster of 13 Salmonella Typhimurium isolates with an unusual DNA fingerprint or pulsed-field gel electrophoresis (PFGE) pattern reported from 12 states. On November 25, CDC’s OutbreakNet team, working with state and local partners, began an epidemiologic assessment of that cluster, which had increased to 35 isolates. On December 2, CDC and state and local partners began an assessment of a second cluster of 41 Salmonella Typhimurium isolates. The PFGE patterns of the second cluster were very similar to the patterns in the first cluster and were first noted by PulseNet on November 24, as a cluster of 27 isolates that had subsequently increased to 41 isolates. Neither of these patterns were seen previously in the PulseNet Salmonella Typhimurium database. The clusters also appeared similar epidemiologically, so the two patterns were grouped together as a single outbreak strain, and the investigations were merged.

The outbreak can be visually described with a chart showing the number of persons who became ill each day. This chart is called an epidemic curve or epi curve. It shows that most illnesses began after October 1, 2008. Illnesses that occurred after March 16, 2009 may not yet be reported due to the time it takes between when a person becomes ill and when the illness is reported. This takes an average of 2 to 3 weeks. Please see the Timeline for Reporting Cases of Salmonella Infection for more details.

The numbers of new cases have declined substantially since the peak in December, but illnesses are still being reported among people who ate the recalled brands of peanut butter crackers after the recall. The outbreak is expected to continue at a low level for the next several months since consumers unaware that they have recalled products in their home continue to consume these products, many of which have a long shelf-life.

Consumers should check at home for recalled peanut butter containing products and discard them.

Preliminary analysis of the first national case-control study conducted by CDC and public health officials in multiple states on January 3 and 4, 2009, comparing foods eaten by ill and well persons indicates that peanut butter is a likely source of the bacteria causing the infections.

An investigation by the Minnesota Department of Health suggested King Nut brand creamy peanut butter as a likely source of Salmonella infections among many ill persons in Minnesota. The Minnesota Department of Agriculture Laboratory isolated the outbreak strain of Salmonella Typhimurium from an open 5-pound container of King Nut brand creamy peanut butter. King Nut creamy peanut butter is distributed in many states to establishments such as long-term care facilities, hospitals, schools, universities, restaurants, delis, cafeterias, and bakeries. It is not sold directly to consumers and is not known to be distributed for retail sale in grocery stores.

The Michigan Department of Community Health isolated Salmonella from an unopened 5-pound container of King Nut brand peanut butter. They have identified the Salmonella found in their container as the outbreak strain.

To date, 19 clusters of infections in five states have been reported in schools and other institutions, such as long-term care facilities and hospitals. King Nut brand peanut butter was present in all facilities.

Seven people from Colorado became ill in December and January and reported eating fresh, in store ground peanut butter purchased from one health food store chain. Preliminary information suggests that the peanuts came from the Peanut Corporation of America facility in Texas. However, the ultimate source of peanuts remains under investigation.

King Nut is produced by Peanut Corporation of America (PCA) in Blakely, Georgia. King Nut peanut butter was not sold directly to consumers but was distributed to institutions, food service providers, food manufacturers and distributors in many states and countries. Peanut butter and peanut paste is commonly used as an ingredient in many products, including cookies, crackers, cereal, candy, ice cream, pet treats, and other foods.

To clarify whether other peanut-containing foods are associated with the outbreak, CDC along with state partners conducted a second national case-control study. Between January 17 and 19, 2009, telephone interviews were conducted with 95 persons who became ill with the outbreak strain and 405 well persons. Preliminary analysis of data received as of 9PM, Sunday, January 28, reveals an association between illness and consumption of pre-packaged peanut butter crackers, specifically with Austin and Keebler brands.

Austin and Keebler brand peanut butter crackers are produced by the Kellogg Company in North Carolina, using peanut paste from the Peanut Corporation of America. On January 14, 2009, the Kellogg Company put a precautionary hold on these peanut butter crackers, and on January 16 recalled these products. Other peanut containing products produced by a variety of companies may have been made with the ingredients recalled by PCA. CDC and state health departments continue to investigate the association of other brands and foods that contain peanut butter with illness.

On February 6, Oregon public health officials confirmed that this Salmonella outbreak can also affect pets. One laboratory-confirmed case of Salmonella in a dog from an Oregon household was reported, and further characterization of this Salmonella isolate is pending. Salmonella resembling the outbreak strain was isolated by a private laboratory from recalled dog biscuits from this dog’s household.

On January 28, 2009, PCA announced a voluntary recall of all peanuts and peanut products processed in its Blakely, Georgia facility since January 1, 2007. In addition to peanut butter and peanut paste, the expanded recall includes roasted peanuts and other peanut products and was based in part on laboratory testing information from the company. On January 28, 2009, the facility reported that production of all peanut products had stopped. More than 2833 peanut-containing products produced by a variety of companies may have been made with the ingredients recalled by PCA. FDA and the product manufacturers are working to determine the list of affected products, which may be extensive. Many companies have already announced whether their products include ingredients being recalled by Peanut Corporation of America, Georgia, and more companies are expected to make similar announcements.

Persons infected with the outbreak strain of Salmonella Typhimurium, by state of residence, as of April 20, 2009 (n=714) 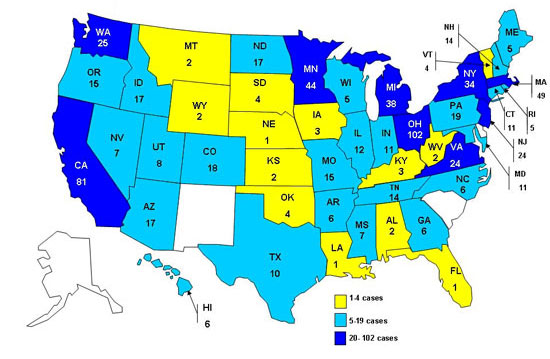 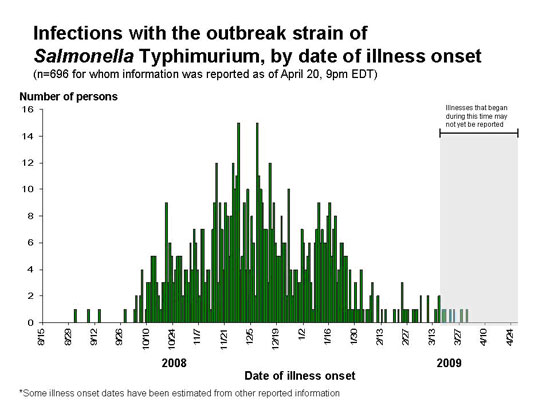 *n=696 for whom information was reported as of April 20, 2009, 9pm EDT. Some illness onset dates have been estimated from other reported information.

Interpretation of Epidemic Curves during an Active Outbreak

The epidemic curve (epi curve) shows progression of an outbreak over time. The horizontal axis represents the date when a person became ill, also called the date of onset. The vertical axis is the number of persons who became ill on each date. These are updated as new data come in, and thus are subject to change. The epi curve is complex and incomplete. Several issues are important in understanding it.

Based on available information, CDC and FDA recommendations include:

For Directors of Institutions and Food Service Establishments

To date, no association has been found with major national brand name jars of peanut butter sold in grocery stores. Public health officials will advise the public if more products are identified as being associated with the outbreak.

Most persons infected with Salmonella develop diarrhea, fever, and abdominal cramps 12–72 hours after infection. Infection is usually diagnosed by culture of a stool sample. The illness usually lasts 4 to 7 days. Although most people recover without treatment, severe infections may occur. Infants, elderly persons, and those with impaired immune systems are more likely than others to develop severe illness. When severe infection occurs, Salmonella may spread from the intestines to the bloodstream and then to other body sites and can cause death unless the person is treated promptly with antibiotics.