Multi-state Investigation of Potential Rabies Exposure at a Softball Tournament 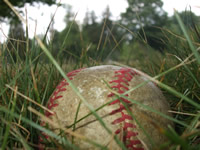 The South Carolina Department of Health and Environmental Control (SCDHEC) notified the Centers for Disease Control and Prevention (CDC) on July 24th that a kitten present during the South Atlantic Summer Showdown softball tournament had been diagnosed as rabid by the North Carolina State Public Health Laboratory (NC PHL). State health departments in South Carolina, North Carolina, Georgia and Tennessee are currently in the process of identifying softball team members that may have been exposed to the kitten and are assessing such individuals for potential rabies prophylaxis.

On July 14th, a coach at the tournament found a gray kitten in a barrel style dumpster, which was located behind a dugout at the Boiling Springs Recreational Facility in Spartanburg County, South Carolina. The kitten was placed in a box and taken later that day to games at the Hwy 295 Sport Complex (North Spartanburg Recreational Facility). The kitten was taken home by the coach to Buncombe County, North Carolina the same day. It sickened and was euthanized on Sunday July 15th. The cat was submitted to the NC PHL and tested positive for rabies virus antigens on July 20th. The rabies virus infecting the cat was characterized as a variant associated with raccoons.

Persons who were bitten or came into contact with saliva from a gray kitten during the South Atlantic Summer Showdown softball tournament may have been exposed to rabies virus and should contact their state health department for assessment.

The rabid kitten was gray in color and was being carried in a box. An investigation to identify if other potentially infected litter mates of this kitten were present at the Boiling Springs Recreational Facility is currently underway by the SC DHEC.

Should contact the local health department to be assessed for their risk of rabies virus exposure and to determine if rabies post-exposure prophylaxis is recommended.