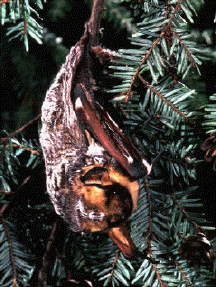 A hoary bat pauses in a hemlock tree. It is one of America's largest and most strikingly colored bats.

More than 11 million persons enjoy camping each year in the United States. Few individuals will ever be exposed to a rabies-suspect animal or need medical intervention due a potential exposure while camping. To date, no human rabies cases due to bats in the United States have implicated camping as a risk factor for an unrecognized exposure.

The mere presence and sighting of bats outdoors and in camping situations is common and normal. Precautions such as avoiding intentional contact with a bat and using screens or mosquito netting are a good idea to prevent potential exposures to rabies.

If you or your family are camping or at summer camp and someone is bitten by a bat, postexposure vaccination is essential if the animal tests positive or is not available for testing.

If you re not sure if a contact has occurred, but a bat is found on or near you, then postexposure vaccination may be warranted. Infants, young children and people with reduced mental function due to medication, alcohol, illness or age should be considered to be at higher risk since they may not have known or be able to tell others if they were bitten.

Deciding about the risk

If bats were present at a summer camp where campers were sleeping, local or state public health professionals will make a careful assessment of the potential for rabies exposure on a case-by-case basis. Campers who may have been bitten by a bat, had direct contact with a bat, or were awakened by the presence of a bat near or on them need to be identified for appropriate evaluation, and, if needed, vaccinated to prevent rabies.

Public health officials will consider many things in making this assessment. For example, if the child slept under mosquito netting or in an enclosure where bats were excluded by screening, this would reduce considerably any possibility of the child being bitten by a bat without knowing it.

Public health professionals will also consider how many people saw bats, where and when the bats were seen, whether or not supervisory adults were present or made bed checks and how often. They’ll look at the age of the campers, the number of persons present in a sleeping area, the mental function of persons in this situation, the type, size, age and history of the structure in which the bats were found, the time of year, and, if it can be determined, the species of the bat.

The photos that appear on this site were provided courtesy of Bat Conservation International, Inc. (BCI) and were used with permission. The use of these photos and the shared development of this brochure do not imply endorsement of BCI's views, services, or products by the Public Health Service or the U.S. Department of Health and Human Services.