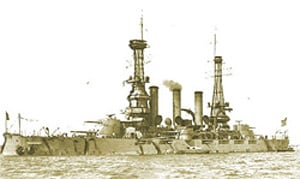 My father, Al Tunis, joined the Merchant Marine in 1917 as soon as he turned 18. The United States had just joined the war and many of his high school classmates enlisted. He was assigned to a ship named the U.S.S. Virginia, which pleased him because he had a girlfriend named Virginia back home in New Jersey. He made two voyages to France, carrying supplies for the war effort in Europe.

Some time during his service, word came that the name of the ship was being changed to the U.S.S. Chatham. The sailors took this as an ominous sign because they regarded it as bad luck to change a ship′s name. However, the passages were uneventful and Al returned safely home at the end of the war.

Soon after arriving back in New Jersey, he went to call on his girlfriend, Virginia, at her home. Her mother answered the door and, at the sight of young Al, burst into tears. Virginia had died of the flu, she told him. Al always blamed Virginia′s death on the change in the ship′s name.