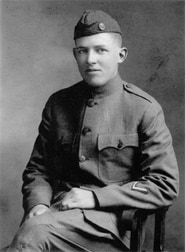 My father, Arne Thompson, was the son of Norwegian immigrants who lived in Minnesota. During World War, he served as PFC in the Army Coast Artillery Corps. When the 1918 Great Flu Pandemic reached his camp, where he remembered soldiers dying all around him, he was put on a burial detail. He helped dig graves for 700 soldiers who died of the flu in October 1918 at Camp Dodge, IA (13,000 fell ill). He told me he remembered seeing the bodies of his comrades stacked like cordwood waiting for burial by the over-whelmed burial detail. My dad came down with the flu while performing the aforementioned duty and was deathly sick, but didn’t die. He lived to be honorably discharged from the Army on Christmas Eve 1918. He was given $30 separation pay and a train ticket home to Paynesville, MN. He went on to live a full life, raised a family, and worked for the post office as a foreman in the Railway Mail Service until his death in 1962. When I asked him, “What did you do in World War I?” All my dad would say to me was, “I survived the flu.”