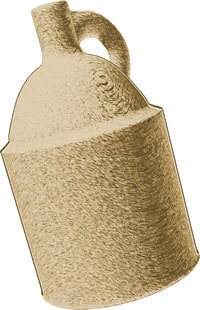 My father, Clarence Crump Ross, was born in 1897. Just six months after he graduated from college and six months into his pre–medicine program, Clarence was drafted into the Army. He was sent to Camp Perry, Ohio. Many soldiers at the camp were sick with the flu and it was Clarence′s job to “dose” the dying solders with whiskey, which he carried in a five–gallon ceramic jug. Although he didn′t drink himself, after having to give a drink to so many dying soldiers, he began having a sip himself! Clarence remembered the procedure for the dead as follows: When a soldier died, you tore off their dog–tag and tied it around the right big toe. The corpses were then stacked like cordwood on wagons. Clarence recalled that one deceased soldier′s body was folded at the waist when it was thrown onto the wagon. When the air in the dead man′s lungs expelled, it caused him to emit a ghostly moan; the sound scared everyone near the wagon, sending them running.

My mother, Isabelle MacDonald Ross was born in 1907. Her father, John MacDonald, was a sheep farmer in New Lexington, Ohio and Isabelle lived there along with her mother and four siblings. Everyone in the family became ill with the flu, except Isabelle (age 10 years) and Eloise (age 8 years), who were given the job of emptying the chamber pots. Fortunately, all survived. John, who was 6′3”, weighed only 128 pounds after his bout with the pandemic flu. But sadly, the family doctor did die, but not from the flu. The exhausted physician lost control of his car and drove it into the path of an on–coming train.