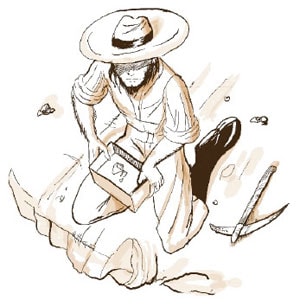 As the Pike′s Peak gold rush waned, Cripple Creek, Colorado was a mature town of 6,000 persons in 1910. The town had a hospital and over 30 practicing physicians. My grandparents Will and Lorraine Brinton met in Cripple Creek in about 1915 and married in 1916. Lorraine was a high school teacher and Will was a physician.

In the final months of World War I, Will was in the army and training in San Diego, California, prior to deployment. Their first child, my aunt, Phyllis Brinton–Pryor, was born at the Cripple Creek hospital on October 26, 1918. At the time, the hospital was full with influenza patients, so Lorraine was discharged shortly after she gave birth to Phyllis. This latter was unusual since the practice, at that time, was for mothers and their newborns to “lie in” at the hospital for up to two weeks. Four local high school students helped Lorraine bring Phyllis home. According to family history, one of the young helpers was dead the next day having succumbed to influenza.

Will and Lorraine and their new baby girl were together briefly in late October or early November, 1918, as Will was in transit to the east coast and on to France. They were luckier than many and did not become ill during the flu pandemic of 1918 and 1919.