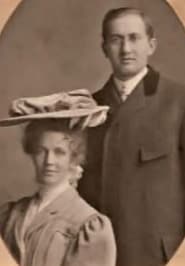 Dr. Otto Wernecke came from rural Manitowoc, Wisconsin. His wife, Caroline Kansier, lived in the village of Manitowoc, where they married. They were extremely saddened by the death of their 2–year–old daughter Frieda from scarlet fever on January 9, 1910. A son, Henry, was born later that year, followed by Margaret in 1912, Otto in 1914, Louise in 1916, and myself, Caroline, on November 8, 1918. Then tragedy struck, again, when my father died from the flu epidemic on December 3, 1918.

The people of Manitowoc were cautioned not to congregate so they wouldn′t spread the disease. Therefore, on December 5, my father′s funeral was held in my grandparents′ parlor. To prevent unnecessary contagion, I was baptized at that same time and placed next to his casket.

Many people seemed to feel that since my father, their dentist, had died they didn′t have to pay the money they owed for dental work he had done. My mother needed to quickly find work to support her family. She asked her sister, who was a milliner in Cleveland, Ohio, to come to Manitowoc to start a millinery store. But what could my mother do with the little ones? My grandparents took me to live with them, and our pastor, Rev. Machmiller and his wife spent a lot of time with Louise, the three–year–old. My grandparents were very good to me, but I did not get to spend much time with my brothers and sisters. In fact, I hardly knew my brother Henry. It wasn’t until my grandparents died in 1936 that I moved in with my mother and siblings. By that time, Henry had married. 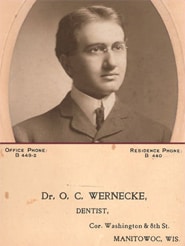 My father′s death in the flu pandemic affected us economically, emotionally, and socially. The millinery was rather successful for a time, but the depression came and competition with large department stores contributed to the failure of the business. My brother, Otto, Jr., wanted to be an engineer, and my dream was to be a teacher, but neither of us was able to go to college.

The flu pandemic of 1918 drastically changed the trajectory of our lives. There are no happy memories of being with my father, only pictures and family stories. I′ve been told what a wonderful man he was, but couldn′t he have lived a little longer? Why did he die at the age of 39? Here I am, almost 90, and I still think of “what might have been.”