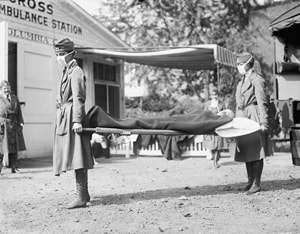 My paternal grandparents, Clifton and Nellie Taliaferro were living in Washington, D.C. during the 1981 influenza pandemic. I remember their stories of bodies piling up in the streets, waiting for the undertaker. Everyone was ordered to stay off the streets. A designated runner was allowed to make deliveries to each household for necessities, but supplier were limited and money was short. Nellie and her five children (my father, the youngest of seven, had not been born yet) resided in a boarding house. She struggled to care for the children all alone since Clifton was often away, traveling with the railroad. Every day came stories of families who lost loved ones. No one was allowed to have a funeral or any gatherings during that time. Fortunately, they all survived.