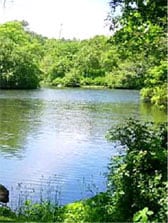 My mom was a professional worrier. She worried about everything from politics and the pulpit to crime and corruption. But her big worry was reserved for the natural world especially the weather.

As she aged in Florida, her external world narrowed to a pond she could see from her patio. She was convinced the water level was dropping; a sure sign something was terribly wrong. In her phone calls to my brother and me, the conversations would eventually work their way back to the dying pond. While we laughed about Mom′s hydrological fixation, my brother and I couldn′t quite grasp why our bright, beautiful and creative Mom was pathological about the impending Apocalypse.

Nearly 30 years after Mom died, I finally connected the dots. She was an eyewitness to the end of many worlds she lived in; her father′s suicide when she was 14; the Depression; World War II; then a horrid four-year period when we lost my father and his entire family. But there was an older trauma in her past. It was an event which I believe defined the woman who was to become my Mom. She only spoke of it once.

She was 7 or 8 years old and sick at home. She wasn′t the only one; there was a vicious sickness sweeping through her small town outside Philadelphia. Mom described standing on the porch and staring at the neighbors across the street. They were dead. Their bodies were lying in the front yard. Then she saw bodies in front of other houses and even in the street. Even the pets were dead. It was the horrific 1918 pandemic. From that day to the day she died, Mom maintained a vigil against a threatening world.

I drove through Mom′s Florida neighborhood in 2004. Not only was the pond still there; it was overflowing. A hurricane had passed near the old house the week before. It was Hurricane Jeanne.

My brother now lives in a neighborhood with a pond. We joke about it, but I know he secretly checks the pond′s level. For me, I look at birds wondering if they′re bringing the next pandemic which will surely be the “End of Times.” We are our mother′s sons.