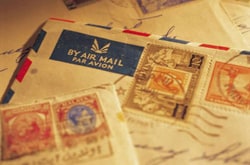 In December of 1918, my mother, Viola Spencer Miller, was about 1½ years old. She lived with her family on a homestead near Helmville, Montana. Her mother, Wilma Gates Spencer, her father, David “Dave” Charles Spencer, her two (half) brothers, Art and Ray (about 12 and 14 years old) and her twin sister, Evelyn were all ill with the flu. Her paternal aunt, Lucy, had come to help care for everyone. Viola’s mother was also pregnant.

Letters dated December 1918 (from Wilma’s mother to a family member back East) told of the flu being prevalent in the area and of cold weather problems. Another letter, dated January 1919 was written by Ray. It told of Aunt Lucy coming to be with the family because the twins and he and his brother, Art, had the flu.

The family patriarch, Dave, died on January 1, 1919. Aunt Lucy, referring to that time, said that she had promised Dave on his deathbed that she would help Wilma with us twins. Unbeknownst to Dave, his youngest son, David Charles, Jr. was born that same day. Until I Viola was older and able to read Ray’s letter, she didn’t know that her mother, Wilma, had only lived 4 days after giving birth to her baby brother. The letter said that with Dave gone, she had no heart to live. David Charles, Jr. was struggling to survive and seemed to be starving. Aunt Lucy fed him some cream and milk, but felt that her sister Etta, who lived in Chicago, was better off financially and should care for the baby. Etta came by train to pick up David Charles, Jr. and adopted him.” One night during this time, Aunt Lucy felt herself getting sick. She drank a quart of whiskey and stayed up caring for the others. She did not get the flu.

Viola and Evelyn were raised by Aunt Lucy until her death of heart failure in the 1930’s. The devastation and poverty that pervaded their lives from that time on was significant. However, my mother grew to be a vibrant, artistic, and extremely compassionate and loving person. There was no such thing as a motherless child in my mother’s presence. She often invited hitchhiking travelers to our home for a meal.

My mother knew her baby brother, David Charles, Jr. all her life. He became a successful realtor, and always welcomed our family to his home and visited us on special occasions like my parents 50th wedding anniversary.