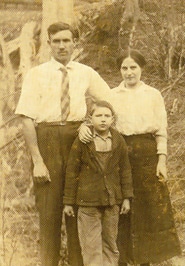 My father, Arthur Duery Davis (September 7, 1893-September 8, 1975), was injured and disabled while logging for the Babcock Lumber Company in Slick Rock Creek, North Carolina in 1910. He was a lumberjack and his wife, Lydia Brown Davis, was the camp cook (along with several other women) and served breakfast and dinner to approximately 300-400 lumberjacks daily. After my father was injured, he worked in the kitchen with Lydia and his stepson, Mikey. Mikey was Lydia’s son born during her first marriage. Arthur and Lydia had three children of their own, but they all died at birth.

When this logging camp closed, the family relocated to Blount County, Tennessee where they lived during the pandemic flu event of 1918. Fortunately, neither Arthur, Lydia or Mikey contracted the flu, but Arthur was put to work digging graves. There was no time to build coffins, since the bodies were put in the ground as soon as possible. My father always referred to the funerals as the “plantings.” 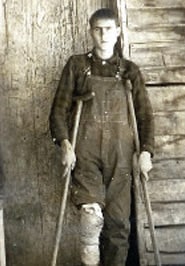 One story in particular he re–told many times is as follows: “One morning, at 6:00 AM, I was set to work digging three graves for a family of six that lived down the road from my home. Around 9:00 AM, the doctor sent word to dig yet another grave. Then around lunchtime, I got word to dig yet another grave and by 4:00 PM, I was instructed to dig the final grave for that entire family.” During this time, Lydia helped take care of the sick and dying, while Mikey was kept inside their home and away from everyone else.

I cannot remember my father ever being sick with a cold or flu–type virus. He was 57 years old in 1948 when I was born. Arthur and Lillie remained married until his death in 1975.