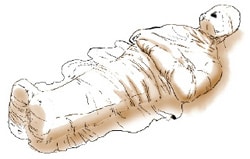 My grandfather, Dr. Frank Biberstein, is now deceased. In fact, he died in 1969 when I was only 14 years old. But when I was growing up, I remember vividly stories he told me about the time when he was a freshman in college. After he graduated from high school, his family, being a strict religious sort, urged him to go to St. Joseph′s College/Seminary in Philadelphia, Pennsylvania. That was in the late summer of 1918. Unfortunately, shortly after he started, the flu struck. What was so dramatic about his story and why I found it so unforgettable was the description he gave of a task that was assigned to the young men attending the seminary. They would walk with a horse–drawn cart down the streets collecting the dead. My grandfather said that he and a couple other seminarians would call out and announce their presence as they slowly walked down the street. Here and there someone would call back to them, and they would take turns going into the homes to collect the bodies. Once they retrieved a few bodies, they would return to a makeshift field hospital. They would do this several hours a day and he did it for most of the semester, though I can′t be sure exactly how long it was. My grandfather was not a big man, so I remember him telling me how hard it was for him to carry the bodies out. He said there was no one else who would or could collect the dead, so the powers–that–be decided that they would get the young men studying to be religious to do the work.

I remember how serious he would get when he told this story. It deeply affected him to have seen so much death at such a young age and to have been put in a position to have been around so many sick people. Every time he told the story, he always said he figured he would get the flu and die himself. He did not get sick, though, and survived the whole ordeal.