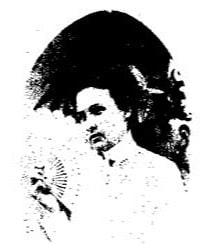 My grandmother, Nellie Walker Silvers Wilson, died when my mother, Inez, was only 14 months old and my mother’s brother was three. Many times through the years, my mother told me the story, as it had been told to her, of her mother’s illness and death from the flu.

During the great flu epidemic, Nellie was very sick. She cried and cried because she knew that she was going to die and leave her babies. Her fever was so high that her tongue cracked the width of a dinner knife blade. Two different doctors attended Nellie, but she did not recover from the flu, she developed pneumonia and died. Just a few minutes before Nellie’s death, a bird flew to the window next to her bed and fluttered for quite a while. Her husband, Alex, even ran to her bed and blew breath in her face to try to save her.

After Nellie’s death, Alex saved the medicine that she had been taking which was a bottle of pills and a bottle of liquid. He put the two bottles in a brown sack, tied the sack with a cloth string, and hung the bag on a nail in an upstairs bedroom. The sack remained there until after Alex’s death when the house was sold and subsequently torn down.

Several people “watched” the night that Nellie lay in state which was the custom in those days. Nellie was buried the day after her death in a navy blue skirt and white blouse that she had made for the fourth of July picnic. Her coffin was of dark grey wood.

Until her death, at age 82, my mother, Inez, often spoke of how much she missed not having her mother.