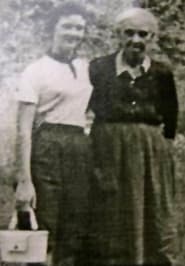 My grandmother, Sally Repass Roman, lost her first born at 5 years of age to the flu in the winter of 1918. The son′s name was Alfred Roman. Although she was blessed with other children, Sally never got over the loss of Alfred and spoke of him often. It is believed that Alfred is buried in the family plot near the old home place close to Tunnel Hill in Russell County, Virginia.