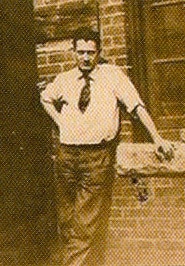 Burdet Charles Oelschlegel, a few months before his death

Torrington, Connecticut is home to many first, second, and third generation immigrants who came for employment opportunities and to escape desperate political situations. One of those immigrants was Adam Oelschlegel, who left behind his parents and five siblings in Bavaria, Germany. Adam became a U.S. citizen, married, had two sons, and settled in Torrington where he was a popular barber. His older son, Burdet Charles Oelschlegel (my grandfather) became an electrician, and the younger son, Herbert Oelechlegel, became a doctor. My grandfather married Leila Wilcox and they soon had a son, my dad, Burdet Wilcox Oelschlegel. One day in early December 1918, Burdet Charles returned home from work “sick.” Within four days after contracting the dreaded influenza, he died at the age of 34 years old, leaving behind his widow, Leila, and four–year–old Burdet Wilcox. Fortunately, no one else in the family became ill. Leila and her son continued to live with Adam for a few years, but then she remarried and re–settled in a neighboring town, effectively losing contact with Adam and Herbert.

When my father grew up, married, and had two daughters of his own (me and my sister Marcia Oelschlegel Ormondroyd), we made rare visits to Torrington to visit the “doctor” and his wife; so our families grew apart.

Later, I chose nursing as a career and I have focused on immunization and public health. I use my grandfather′s death certificate as a teaching tool when I am involved in annual flu clinics. I′m sure he is watching!

Note: In 2005, while doing geneology research (just for fun), I typed in the name Oelschlegel. Imagine my shock when I saw an item that mentioned “anyone looking for my great–grandfather, Adam Oelschlegel.” I contacted Jan Oelschlegel Kissko who still lives in the Torrington area and has had contact with our relatives in Germany. We are now planning a trip to Germany to meet family living there.