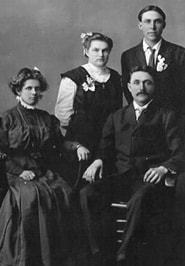 Thomas and Carrie Langan (seated) on their wedding day in 1909

My grandfather Thomas Langan was born in 1893 in Cedar Rapids, Nebraska. Cedar Rapids was a small farming community which in 1910 had a population of 576. The main sources of income were farming and working at the flour mill near the river. Thomas married his wife Carrie at the age of 16 in 1909, and by 1918 the couple had five children. In December of 1918, Thomas (25 years) and his three brothers, William (22 years), Edward (20 years), and David (16 years) all became ill with the pandemic flu. Thomas was the first to become ill, and William was known to have taken a home remedy to Thomas. We do not know what the home remedy consisted of, but local media talked about Vicks® vapor rub and garlic as remedies for the illness.

Tragedy struck on December 16, 1918, when Edward died. Three days later, William died. And, the very next day, David died. Though still ill, Thomas attended the funerals of William and David, which were held on the same day. Thomas survived and he and Carrie went on to have four more children, including my mother, Dorothy Langan. To this day, a large monument stands in the Cedar Rapids cemetery, erected by my great grandfather, marking the loss of his three sons and his wife who also died in January 1918.

The personal tragedy of the 1918 pandemic flu within my family was not discussed until I became involved in a project to develop a crisis and emergency risk communication course for pandemic influenza. While writing the course book, I happened to discuss it with my mother who then shared the family story with me. She said that her parents, Thomas and Carrie, seldom mentioned the pandemic events from their early years of marriage and, when they did, it was always in hushed tones.

Today, I teach the Centers for Disease Control and Prevention (CDC) pandemic influenza crisis communication course across the nation and tell my family′s story as a reminder that our preparations for the next influenza pandemic is about people, families, communities, and their legacy. The community mitigation measures recommended by CDC can help reduce illness and deaths from pandemic influenza. Our efforts in public health are about saving people, not about numbers.