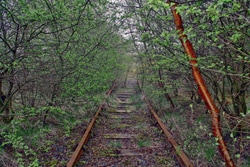 My maternal grandmother, Edith Frances Kymes, died in 1919. I understand that she was an early Christian Scientist and a writer for the Los Angeles Times. I was also told that she died from the great flu. In 1919, she was married to my grandfather, William Lorenz, Sr., an insurance salesman and justice of the peace in Calexico, California; a Mexican border town. The couple had two children, a son, William, Jr. and my mother, Jeanne Florence Hein, who had been born in 1917. My grandfather later married, and sadly, the living members of the Lorenz family no longer have photos of my grandparents. Before his death, my Uncle William, an amateur historian, traced his mother’s history and learned that she was buried in Inglewood Cemetery. Coincidentally, as a children’s writer, I am a contributor to the Los Angeles Times, and somehow feel connected to my maternal grandmother in that way.

My mother was only two years old when her mother died. She told me that when she heard the sorrowful whistle of passing trains, near the home where she grew up, it was like comfort from God for her loss.

I truly wish I had known my grandmother Edith. Including me, her grandchildren are my sister, Virginia; and Uncle William’s daughter, my cousin, Beverly Lorenz.