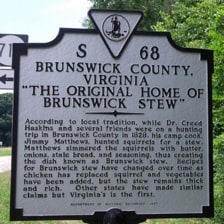 Alice Campbell Jones–Chambliss, fondly called Cammie, was the second child and only daughter of Samuel Goode Jones II and Delha Rebecca Pope. She was born July 10, 1887 and lived her entire life at her family’s home in Brunswick County, Virginia called, “The Oaks.” The home was built before 1836 by her maternal great–grandfather the Honorable Frances Fitzgerald Jones, a Virginia State Senator. On September 11, 1912, Cammie married Roger Lee Chambliss on a platform adjoining the spacious front veranda at The Oaks. Afterwards, she and her new husband lived there with her parents and her brother John Jones. The couple had three children in the next four years: Roger Lee, Jr. (b. October 26, 1913); Delha Pope (b. January 9, 1915); and Campbell Goode, III (b. June 6, 1916).

“This happy and near ideal life was shattered when John contracted Spanish Influenza and had a very quick death on October 12, 1918. This tragic event was followed five days later with a more devastating blow when Cammie also fell sick with Spanish influenza and died October 17, 1918.” Cammie and John were buried in The Good Shepherd Episcopal Cemetery where they had been active members.

The sudden and tragic deaths of their son and daughter, in the prime of their lives, were most heartbreaking for their parents. They felt that they could no longer live at “The Oaks.” The remaining family members moved to a house located near Rawlings (VA) Post Office which was on part of the estate also owned by Senator Jones. Campbell Goode and his wife lived in that home from their marriage in 1958 until his death in 2006.