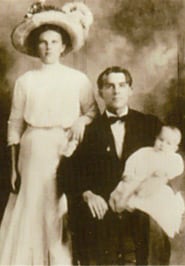 Teofilia Rogowsky–Grala became one of Lorain, Ohio′s pandemic flu victims on November 30, 1918. Teofilia was weak from the birth of her fourth child and gravely ill with the flu when she asked her husband, Bronislaw Grala, to bring their children into her room. My aunt, Bronislawa “Bernice” Francesca Grala, remembers that her father thought he′d go crazy waiting for the doctor to arrive. So many people were sick and there were not enough doctors to tend to them!

After Teofilia′s death, Bronislaw was persuaded by his brother to relocate to New Britain, Connecticut. Concerned about the burden three children would place on his sister–in–law, Bronislaw made arrangements for Bernice to stay behind with a family who agreed to raise her. But at the last minute, he decided to visit his daughter to say goodbye. Bernice said, “I am sitting there playing with my toys when I see my father and run to him. He started to cry when I threw my arms around his neck and he decided to keep the children together.”

Our family assumed Teofilia′s newborn had also died, before Bronislaw left Ohio with his three children. But recently a death certificate was found for a child named Stanislaw Grala, the son of Bronislaw Grala and Teofilia (Rogowski), who was born November 25, 1918. Stanislaw died 6 months later on May 18, 1919. The cause of death was “milk infection” (evidently, a very common cause of infant deaths at that time, especially if the birth mother was ill with an infectious disease.) The informant indicated on baby Stanislaw′s death certificate was Domonik Rutkowski who, with his wife Michaeline, lived near Bronislaw and Teofilia. We do not know if the Rutkowski family was related to Bronislaw and Teofilia. And further, we do not know if Bronislaw knew that his baby son had not survived?

Years later, before his death, Bronislaw gave Bernice a container filled with dirt he had saved from Teofilia′s burial site. He asked her to throw some of it into his own grave.