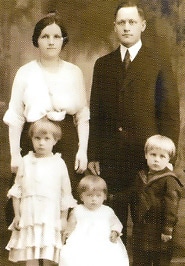 I remember the first time I looked at an old photograph and asked, “Who are these people?” My grandfather, Joseph Garas, smiled sadly and told me they were my two uncles, Joseph, Jr. and Stanley Garas, who died in the Great Epidemic. I asked what an epidemic was and he said, “It is a thief who steals the young and the old and gives no time to mourn. It stole Joseph, my namesake after he helped his friend pull a wagon up the street. It stole Stanley who had just learned to throw a ball to the other side of the yard.”

“Why couldn′t you mourn, Grandpa?” I asked. He replied, “We were too busy burying our dead and keeping our families safe. We barely had time for a priest to bless your uncles’ bodies before we put them in the ground. We were so afraid someone else would get sick if we did not bury our dead within hours.”

The following year he took me to their graves. The two graves were not side–by–side, but rather, feet–to–head since my uncles died a week apart. Also, I noticed there were very few gravestones in that area of the cemetery. When I asked why, my grandfather said, “We wanted to forget.”