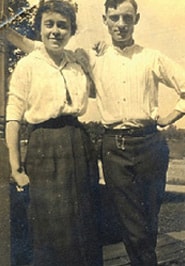 Bernice Geller Deady was just 26 years old and the mother of twin boys, Jack and Leo Deady, when she died of the flu in January of 1919. Jack and Leo were just two–and–half years old and Bernice was also pregnant again. Bernice was sick for only a couple of days; her lungs filled with fluid and her skin turned a deathly shade of blue. She died at home in her bed attended by her sister, Belva Geller Griffin.

For nearly 80 years, through several generations, the story was told that Bernice had been pregnant, once again, with twins when she died. At the time, this was just familial lore because the medical advances that could confirm that she was carrying twins were nonexistent back in the early 1900s. Furthermore, the flu victims were too numerous. Most were buried with urgency. I believed Grandmother Bernice was pregnant, but I always doubted the story that she was carrying twins.

In 1997, our family had a large celebration at the home of my brother, Dan Deady, in Springfield, Ohio to mark the 60th wedding anniversary of our parents, Jack and Mary Eleanor Deady. The morning after the anniversary party, my dad took several of us on a drive through the old neighborhood where I grew up.

First, he showed us the home where he lived when his mother, Bernice, died. He knew the stories that all of his aunts and uncles and his father had passed on to him. The home brought back memories and those memories poured out of a man who never talked much. He recalled that Bernice was laid out in the parlor, right close to the picture window that opens onto the porch. The wake was more of a brief showing for just a few hours the day after she died. Friends and relatives stayed on the porch and walked past the window to say a prayer for her through the glass to avoid the contagious risk of the flu. And then my father repeated the story that Bernice had been pregnant with twins. How did they know, Dad? How can this be verified? His answer was “that is what everyone said.”

In February, 1999 along with my sister, Barbara Deady Weikert, I visited Leolia Griffin Smith, my dad′s cousin, at her home in Dayton, Ohio. My dad had become very ill and would not live much longer, so Barbara and I wanted her to know about this. Leolia was the daughter of Belva, my grandmother′s sister and the one who had taken care of my grandmother when she became ill. Leolia was a very tiny, bright–eyed, and sharp–minded elderly woman who lived alone in her house since her husband died in 1986. Sitting in her living room among a collection of expensive Lladró® collectibles, I took the opportunity to pick her brain about family facts for my incorrigible genealogy habit. It was a fruitful visit full of newspaper clippings, dates, facts and stories; some humorous, some sad, and all poignant.

When the topic turned to my grandmother and her mother, Leolia told us she was there when our grandmother died in 1919 and she knew for a fact that she had been pregnant with twins. She went on to tell us that our Grandmother Bernice had lost the twins (spontaneously aborted) during her last hours and the fetuses were buried in the casket with her.