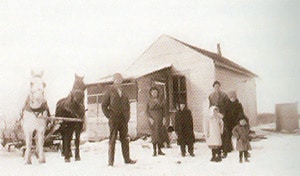 Simon Wickstrom was a 21–year–old newlywed when he ventured into the wind-swept prairie of west-central Minnesota in the year 1898, and bought a farm in Synnes Township. This young Swedish immigrant, mentored by his carpenter father, built a house that would be fitting for his 16–year–old bride, the former Selma Peterson from Atwater, Minnesota.

Ella Wickstrom (mother of Marie Otto), the eldest, was born when Selma was 17 years old. Seven additional children soon followed: Ralph, Lester, Carrie, Ted, Florence, Elmer and Alvin. Since Selma worked in the field and helped with chores, Ella took care of the younger children. She cooked, cleaned, and tried to make order out of chaos in their little home.

In 1918, tragedy befell this young family; they all got sick during the historic flu pandemic. Ella stayed in the house to care for her sick father and younger siblings. Selma and her oldest son, Ralph, took care of the chores.

On the night of November 19, Lester (13 years old) died. His body was placed in the granary until the undertaker could get there. The other children were permitted to go in and say “goodbye” to their beloved brother. When the undertaker arrived, he took his body directly to the cemetery where Lester was buried as rapidly as possible. Everybody was scared. It was said that, “People were dropping like flies.” 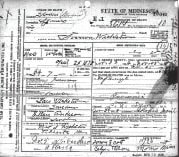 Five days later, on November 25, Simon died. The undertaker came with a wooden coffin, and after Simon was laid out in it, it was set on the ground. The crying children were taken outside to say “goodbye” to their father. When the children went back into the house, the casket was placed in a buggy and taken directly to the cemetery. Simon Wickstrom was laid to rest next to his son Lester.