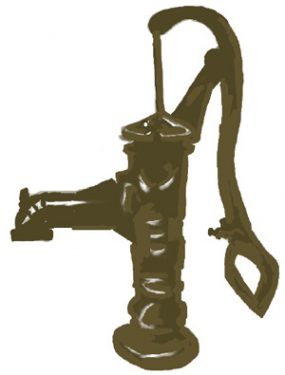 My grandfather, Antonio Grillo, and my mother Frances M. (Grillo) Chiofolo each told me stories about how our family survived the 1918 flu, but that many of their neighbors did not.

My grandparents had emigrated from Palermo, Sicily, in 1912 and had not really learned to speak English yet. My mother was born shortly after they came to America. In the fall of 1918, they lived on the family farm in East Vineland, New Jersey. The family consisted of my grandfather, grandmother (Vincenza), my mother, who was six at the time and the oldest of the children, and two or three younger brothers.

It was during World War I and Frances would listen for bombs or guns; she thought the war in Europe was much closer to New Jersey.

The family′s farm was near an intersection with the Mays Landing Highway and soldiers traveling home from the war would stop to ask for water. The farm had a well with a hand pump that had to be primed. (I remember playing with the well pump when I was a boy back in the 1950s.) Although they could not understand the soldiers, they always gave them water or allowed them to drink water from the well.

In 1918, a few days after some soldiers had stopped for water, the entire family got sick. Antonio thought the soldiers had made the water bad. The entire family was sick with high fever, vomiting, and diarrhea. Frances said she and her brothers were all in their parents′ bed together and everyone was so sick, that no one was able to get out of bed for what seemed like days.

Down the road from their farm was an American couple (my grandparents referred to anyone who spoke English and was not Italian as American). The American man came to their house to check on them. He killed several chickens from their chicken coup, made chicken soup, and then spoon fed each one of the Grillos. This man helped my grandparents to the outhouse, cleaned them up, changed the bed sheets, cleaned the children, and put all the dirty sheets and clothing in a pile outside. (I am not sure if this laundry was washed or burned.)

Apparently this man did this at other homes as well because after they all recovered, other neighbors said he had come to their home to check on them, too, and offered or gave them chicken soup.

The Grillo Family survived the 1918 flu, thanks to the kindness of the “American”whose name they didn′t even know. I asked my mother “Why didn′t they find out the man′s name after they all got better?” My mother told me that the man′s house was empty after the flu pandemic. No one knew if the couple had moved away or if both had died, but the story of his kindness has never been forgotten.