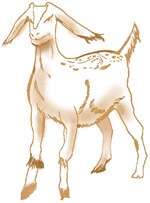 My dad, Manual Pacheco, was born on July 10, 1918 to Juan de Jesus and Amelia Pacheco in Rainsville, New Mexico. He was their sixth child. When Manual was only 2 months old, his mother, Amelia became ill with the flu. Because she was so sick, she was unable to produce breast milk for Manual. Therefore, Juan fed the baby coffee with sugar added to it until he was able to purchase a goat. The goat’s milk sustained Manual and he survived, and so did his mother. No one else in the family became ill.