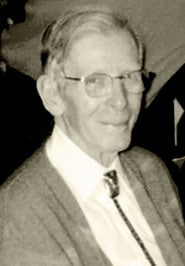 Since returning to the Albuquerque, New Mexico area from Atlanta, Georgia, my husband and I began spending time with an elderly gentleman who was my family′s neighbor in Los Alamos, New Mexico for nearly 50 years. William “Bill” Miner was living in an assisted–living home in Albuquerque and we often visited him because his two children lived several states away (his wife, Dot, was deceased). One day while I was sitting with him in his hospital room waiting for his daughter to arrive, he told me about the 1918 flu.

Bill was born in November 1913 in Springfield, Massachusetts. He was about 5 years old when he and his parents became ill with the pandemic flu. Bill remembered being in bed a long time and studying the ceiling for long periods. Fortunately, they all survived. One interesting thing Bill remembered was that when he was sick, he was being treated with belladonna and aconite. At the time, belladonna was being used for colic and asthma and aconite was used to reduce fever and pain.

Bill died just a week shy of his 94th birthday on October 26, 2007. He spent his career working with plutonium at the Los Alamos National Laboratory.