Sadie Afraid of His Horses-Janis 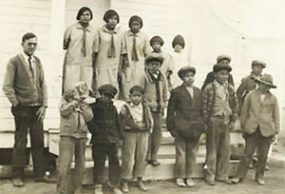 In September 1918, Sadie′s grandmother, Nancy Poor Elk–Red Cloud (wife of Jack Red Cloud) went with her family to Alliance, Nebraska to pick potatoes. The journey from Pine Ridge, South Dakota to Alliance was a five–day journey by wagon. “Spud Pickin” was an economic venture for the Indians on the Pine Ridge Indian Reservation; it was a way to earn money and to buy food for the winter. The members of Nancy′s family who made this trip were: her son, Charles Red Cloud, his wife, and their three children (Charlie, Susie and Lucy); her daughter, Susie Red Cloud–Hand and her husband Joe Hand; daughter–in–law, Alice Red Cloud and her son, Melvin; mother–in–law, Sallie Black Bear; grandson, Edgar Red Cloud; and my grandmother Sadie and her parents Lucy and Frank, and Sadie′s siblings Zona and Paul.

The Red Cloud family had just finished picking potatoes at the end of October 1918 when they were told of “a real bad sickness that was coming and that they should start for home.” They had just started to break camp when the middle–aged members of the family started to get sick with the flu. The family decided to stay encamped at Alliance until they got well enough to travel back home to Pine Ridge.

The oldest children in the group were Sadie′s sister, Zona, and first cousin Nancy, who were sent to town to get groceries and fuel. Nancy spoke very little English, so Aunt Alice, who could speak and write English, wrote the note for the groceries. Zona was sent along as the interpreter. Sadie, who was 7 years old at the time, was fearful watching her sister and her cousin depart for town. Adding to the tension was the fear that her family would die from the flu. Also, the train would stop in Alliance to bring home the bodies of the soldiers who had died in WWI. It was eerie for the child to watch the constant stream of wagons going to the graveyard everyday to bury the soldiers and those who had died from the flu. 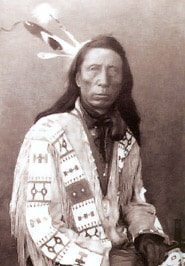 The Red Cloud family was anxious to get home because they had received word that members of their family had died from the flu, too. So, they started out from Alliance with the grandmothers′ driving the wagons. Sadie remembers that this was ironic since her cousin Edgar was the one who had driven their elderly grandmother′s wagon on the way to Alliance, but now he lay ill in the back of the wagon box and their grandmother was driving the horses. The family got to Gering, Nebraska when it started to rain. The drizzling rain made the members of the family who were suffering from the flu get worse. “Thankfully,” says Sadie, “A farmer told them to camp at his farm till the rain stopped.” Seeing that the situation was becoming dire, Nancy took charge and told everyone to stay in their tents and she would bring them food and medicine. Everyone who got sick was placed in a tent of their own. Nancy boiled a big bucket of flat cedar tea which she took from tent–to–tent to fill their individual cups. She made certain they used their own cups and that there was no sharing of personal items like washbasins or utensils. Nancy “smugged” the tents with sweet grass so they could breath better and to ward–off evil spirits. Severe coughing would close off their throats, so she mixed a teaspoon of kerosene and sugar together and fed it to them. Sadie′s father, Frank, was delirious with fever. Nancy rubbed an “ointment” on his forehead.

All the members of the Red Cloud family survived. Sadie says they all had a good laugh later remembering the sugar and kerosene. She was also happy that from that point onward everyone received their own personal items like washbasins, combs, and dishes. 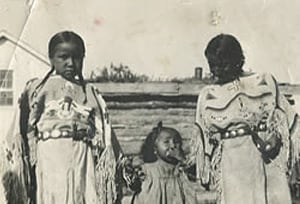 Nancy Red Cloud (left) and Zona Afraid of His Horses (far right). The child in the middle is unknown.

As they recovered, the family continued home to Pine Ridge. When they reached Chadron, Nebraska, they bought winter supplies: beans, flour, sugar, salt, bacon and more white kerosene. They finally reached home in early November. Frank was so happy to get home that he jumped off the wagon and headed for his log cabin, but fell in a heap, not realizing how weak he still was from the flu.

On November 11, 1918, Sadie′s brother Paul came running home from town yelling that the war had ended. Church bells rang, guns were being shot into the air, and there were shouts of joy everywhere. Sadie says “it was the best time because the war had ended and the Red Cloud family had survived a “bad sickness.”

In her desperation, my great–grandmother, Nancy, had applied the principals of quarantine, prevented cross–contamination, provided hydration and inhalation therapy, and used pharmacology to save her family. To this day, my grandmother Sadie has a medicine bag with flat cedar, sweet grass, bitter–root, and green tea. However, she says she′ll pass on the kerosene and sugar.

Despite her advanced years, Sadie never complains of being sick, treats her minor afflictions herself, and has a better memory than people less than half her age. Sadie says the only pain in her life is the offense line of her beloved Denver Broncos football team.

* Tasunkakokipapi (1830–1900), also translated as His–Horses–Are–Afraid and They–Fear–Even–His–Horses, was a chief of the Oglala Sioux. Commonly misinterpreted, his name means “a man so feared in battle that even the sight of his horse inspires fear.”