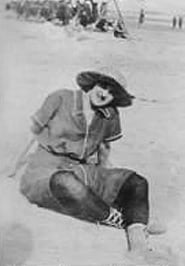 My great, great grandparents, Patrick Bowen and Winifred Connor, emigrated from County Mayo, Ireland to the United States in the mid-1800s and settled in a neighborhood on the northwest side of Philadelphia known as Manayunk. This neighborhood is located on the banks of the Schuylkill River and contains the first canal begun in the United States. Patrick and Winifred Bowen had nine children. The seventh child was Agnes Anastasia Bowen who married Peter Tyrrell, a barber. They also lived in Manayunk and had six children. Their third child, my grandmother Mary Agnes Tyrrell, was born on March 15, 1900. In her own words, “I was baptized, went to school and high school in St. John the Baptist Parish, and lived in Manayunk until I married.” At the time, Mary Agnes had 39 first cousins that lived in her neighborhood. Her father and grandfather and other family members worked in the mills in Manayunk. She goes on to describe, “Shortly after my graduation and starting to work, we were in the First World War. All our boyfriends were leaving and we had heatless Mondays, meatless Tuesdays, no sugar, and then the flu epidemic.”

My grandmother was the only member of her household to contract the 1918 pandemic flu. Mary Agnes was seen, at home, by Dr. William Leaman. She was anointed with last rights by Monsignor Eugene Murphy at which time they attempted to get Mary Agnes to take pills for the illness. She refused to try and swallow them, so they tried dipping the pills in holy water to entice her to take them. She still was not able to swallow them. The family expected her to be dead by dawn. In her own words, “I was the only one in the family to get it and I was anointed and supposed to die before dawn, but I managed to pull through.” Others were not so fortunate. Many friends and neighbors died that day. A wagon came up the street in the morning and families brought out their dead to load into the wagon without coffins.