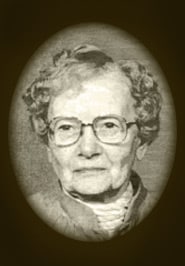 In 1918, my grandmother, Alvena Buehler, was 17 years old. Alvena lived on a wheat farm outside Hettinger, North Dakota. The farm was a homestead, the house modest and small without plumbing or electricity. During the pandemic flu event, everyone in her family (four younger brothers and her parents, George and Flora) was sick, except for Alvena. She was the oldest child and her father, George, asked her to “go to town and get medicine.” George must have been in a bad way to ask her to go since she couldn′t drive. Alvena did as she was told.

The family′s home was roughly 22 miles from town. In those days, extended country roads were little more than well–worn paths. The family′s car was likely the cheapest model, with crank start and not much cab, if any. She asked the bachelor living at the farm next door, about 1–2 miles away, to assist her. There would have been no trees at that time on the prairie. No shelter from the wind. The hills in that area are gentle and not very high. Car speed was on the order of 5–10 miles an hour, or less. They eventually made it to town and Alvena returned after dark.

I asked my grandmother: “What happened next?” She simply responded, “I brought back the medicine. I guess it worked. Everyone made it.” I asked her what the medicine was, but she didn′t recall.