Although poliovirus is no longer endemic in the United States, it’s important that healthcare professionals rule out poliovirus infection in cases of unexplained acute flaccid paralysis (AFP) that are clinically compatible with polio, particularly those with anterior myelitis, to ensure that any importation of poliovirus is quickly identified and investigated. See the MMWR case study on AFP for more information.

There has not been a case of wild polio acquired in the United States since 1979. The last imported case of wild polio was in 1993. However, polio is still a threat in other parts of the worldexternal icon and could easily be brought into the United States from countries where wild poliovirus is circulating. In the last decade, at least 40 polio-free countries have been affected through international travel. 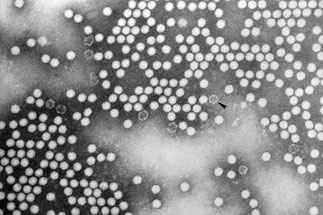 Poliovirus is a member of the Enterovirus genus, family Picornaviridae. Enteroviruses are transient inhabitants of the gastrointestinal tract, and are stable at acid pH. Picornaviruses are small, ether-insensitive viruses with an RNA genome. Poliovirus causes polio, or poliomyelitis, a highly infectious disease.

There are three poliovirus serotypes (PV1, PV2, and PV3) with minimal heterotypic immunity between them. That is, immunity to one serotype does not produce significant immunity to the other serotypes.

Poliovirus infects only humans. Poliovirus is spread by the fecal-oral and respiratory routes. Infection is more common in infants and young children. Polio occurs at an earlier age among children living in poor hygienic conditions. In temperate climates, poliovirus infections are most common during summer and autumn. In tropical areas, the seasonal pattern is less pronounced.

Most people infected with poliovirus (72%) will not have any visible symptoms. About 1 out of 4 people (24%) will have flu-like symptoms. These symptoms usually last 2 to 5 days, then go away on their own.

About 1% of people will have weakness or paralysis in their arms, legs, or both. The paralysis can lead to permanent disability and death. About 2 to 10% of people who have paralysis from polio die, because the virus affects the muscles that help them breathe.

Adults who had paralytic poliomyelitis during childhood may develop noninfectious post-polio syndrome (PPS) 15 to 40 years later. PPS is characterized by slow and irreversible exacerbation of weakness often in those muscle groups involved during the original infection. Muscle and joint pain also are common manifestations. The prevalence and incidence of PPS is unclear. Studies estimate that 25% to 40% of polio survivors suffer from PPS. 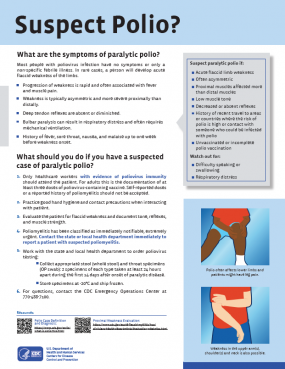 Acute flaccid paralysis (AFP) is the manifestation of a wide spectrum of clinical diseases and is not nationally notifiable in the United States. Worldwide, children younger than 15 years are the age group at highest risk of developing polio and some other forms of AFP. Even in the absence of laboratory-documented poliovirus infection, AFP is expected to occur at a rate of at least 1 per 100,000 children annually. It can result from a variety of infectious and noninfectious causes. Known viral causes of AFP include enterovirus, adenovirus, and West Nile virus. However, AFP caused by these agents is very uncommon in the United States. A study examining AFP in 245 children younger than 15 years in California from 1992-1998 found the most common diagnoses were Guillain-Barré Syndrome (23%), unspecified AFP (21%), and botulism (12%).

Consider polio in patients who have unexplained AFP.

A probable case of polio is defined as an acute onset of flaccid paralysis of one or more limbs with decreased or absent tendon reflexes in the affected limbs, without other apparent cause, and without sensory or cognitive loss. Paralysis usually begins in the arm or leg on one side of the body (asymmetric) and then moves towards the end of the arm or leg (progresses to involve distal muscle groups). This is described as descending paralysis. Many patients with AFP will have a lumbar puncture and analysis of cerebrospinal fluid (CSF) performed as part of their evaluation. Detection of poliovirus in CSF from confirmed polio cases is uncommon, and a negative CSF test result cannot be used to rule out polio.

Consider polio in patients with polio-like symptoms, especially if the person is unvaccinated and recently traveled abroad to a place where polio still occurs, or was exposed to a person who recently traveled to one of these areas.

If you suspect polio:

The rapid investigation of suspected polio cases is critical to identifying possible poliovirus transmission and implementing proper control measures, allowing specimen collection for poliovirus isolation to confirm whether a case of AFP may be the result of wild or vaccine-related poliovirus infection.

For more information see CDC poliomyelitis guidelines for epidemiologic, clinical, and laboratory investigations of AFP to rule out poliovirus infection.

Paralytic polio has been classified as “Immediately notifiable, Extremely Urgent,” which requires that local and state health departments contact CDC within 4 hours.

Non-paralytic polio has been classified as “Immediately notifiable, Urgent,” which requires that local and state health departments contact CDC within 24 hours.

For more information about what should be collected as part of a case investigation see:

Each state and territory has regulations or laws governing the reporting of diseases and conditions of public health importance. These regulations and laws list the diseases to be reported and describe those persons or groups responsible for reporting such as healthcare providers, hospitals, laboratories, schools, daycare and childcare facilities, and other institutions. Contact your state health department for reporting requirements in your state.