The town of Fairfield, Connecticut, is on its way to better health. The Preventive Health and Health Services (PHHS) Block Grant partially funded a new bike route that makes it easier for people in Fairfield to get more exercise.

In 2011, nearly 30% of Connecticut residents had high blood pressure, and even more (36%) had high cholesterol—two conditions that can lead to heart disease. Regular exercise can reduce a person’s risk for heart disease and other health problems. However, Fairfield residents did not have many safe roads where they could walk or bike. They needed more designated bike routes, sidewalks on major roads, and bike-friendly public transportation centers, such as indoor bicycle storage facilities at train stations. Research shows that people with safe places to walk or bike near their homes are more likely to get enough exercise.

Using a portion of PHHS Block Grant funds, the Fairfield Health Department and several community groups created Fairfield’s first official bike route in June 2013. The bike route is about three miles long, begins in a residential neighborhood, and ends in the heart of the downtown area. The health department and community groups worked to provide a bike route that is safe, easy to get to, and attractive for residents. The neighborhood’s reaction to the bike route has been very positive. 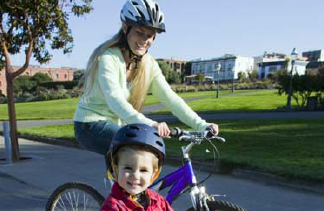 PHHS Block Grant funding helped the residents of Fairfield, Connecticut, get a new bike route and be more physically active. 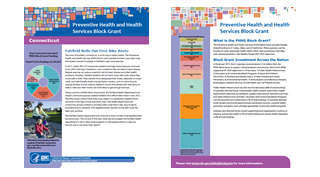