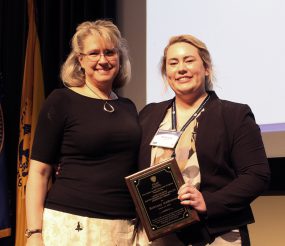 2018 Salinas Award Winner, Brittany Anderson (right), was presented with the 2018 Louis Salinas award, by her CDC supervisor, Heidi Davidson. In his nomination of her, Brittany’s host site supervisor, Chris Dankmeyer said, “Ms. Anderson has been an exemplary Public Health Associate for our host site and routinely demonstrates a commitment and determination to improving the health of people in Northwest Alaska.”

More than a thousand associates have gone through CDC’s Public Health Associate Program (PHAP) training to become leaders of the public health workforce of tomorrow, but, so far, only one associate has ever served 33 miles north of the Arctic Circle in Kotzebue, a town on Alaska’s northwestern coast!

Before joining PHAP, Brittany Anderson studied anthropology and molecular biology at Miami University in Ohio, graduating in May 2016. “I liked people and medicine, so I chose medical anthropology as my emphasis, and I just loved it,” she says. “That’s how I found out about public health, which is the perfect combination of science and people.”

Moving From the Windy City to the Arctic Circle

“I absolutely love it here and am thrilled that Maniilaq is my host site!” she says. “I have great supervisors, the wildest, most amazing location, and I’m doing some of the coolest work. There’s a significant need for more public health professionals working with tribal communities, and I’m honored to be one of them.”

“Brittany is a great example of what an associate can do—connecting our small, tribal community to CDC resources,” says Cyrus Harris, hunter support and natural resources advocate for Maniilaq and one of Anderson’s host site supervisors. “She has been quick to learn about our cultural lifestyle, she gets involved in community meetings, and she fully participates in field work activities.”

Harris has even given Anderson an Iñupiat name, “Sisuaq,” meaning “canary of the sea” (Beluga) because they fill arctic waters with music and are icons of Kotzebue Sound and the Harris family camp at Sisualik.

“Simply put, having an associate allowed us to do what we’ve been dreaming of doing.”—Chris Dankmeyer, Maniilaq’s environmental health manager and one of Anderson’s host site supervisors. 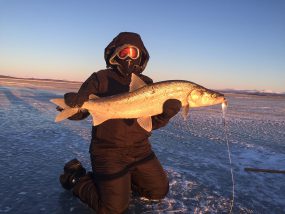 Cyrus Harris, one of Anderson’s host site supervisors, taught Anderson (pictured in -20°F degree weather) to ice-fish in the lagoon behind her apartment .

Living in the Arctic Circle brings unique public health issues. “Our host site location intimidates most people because of its geographic remoteness, extreme arctic environment, and difference in culture from the lower 48,” says Chris Dankmeyer, environmental health manager and one of Anderson’s host site supervisors. “However, those challenges that intimidate most people appear to be the same things that motivate Brittany. She enjoys learning about different cultures and experiencing Iñupiat customs and courtesies. She’s in awe of the extreme arctic environment and recognizes its beauty. Combining these personal attributes in a professional who is dedicated to making people healthier makes Brittany a great match for our tribal organization.”

“Previously, our lab only tested water samples from regional public water systems monthly for total coliforms, or colonies of E. coli (a potentially harmful bacteria found in public water that mixes with surface water), using a presence/absence method as necessary for compliance,” says Anderson. “But that method only told us if the bacteria was in the sample. Now with our new certification method, we are able to estimate how many bacteria are in water samples.” This new method also allows regional public water systems to comply with the Environmental Protection Agency’s Long Term 2 Enhanced Surface Water Treatment Rule (known as “LT2”) to reduce gastrointestinal illness linked with Cryptosporidium and other microbial pathogens. “We do this by collecting raw water samples biweekly and incubating them in well trays that allow us to quantify the amount of bacteria in the sample,” says Anderson. 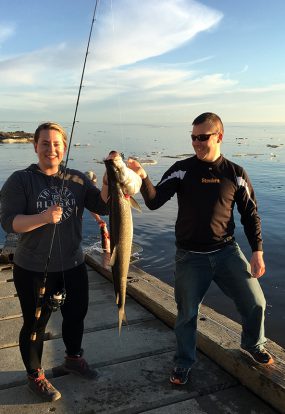 Anderson (left) and Dankmeyer fishing at midnight during the long summer days. Kotzebue gets around 20 hours of daylight in early summer.

Anderson has put together a standard operating procedure manual that the Maniilaq lab now uses. She also had their lab’s method certified in June 2017, which allowed them to begin running LT2 water samples immediately. She is working with the Alaska Department of Environmental Conservation to develop sampling plans for her host site’s communities.

Ensuring Food Safety for the Community

“Brittany is also a huge help in the Traditional Foods Program (hunter support) and natural resource advocacy for Maniilaq,” says Harris. “She’s i

nvolved in our seal oil project, planning the Traditional Foods Symposium meeting, and hosting monthly elder potlucks—just to name a few. The Traditional Foods Program provides supplemental fish and game to elders aged 60 or older who are no longer able to harvest traditional foods, or ‘niqipiaq,’ on their own.”

“We are working with labs at the University of Wisconsin and University of Alaska-Fairbanks to demystify the traditional Iñupiat method of making seal oil to better understand the risk of Clostridium botulinum toxin (Cbot),” says Anderson. Cbot causes botulism, a rare but serious illness caused by a toxin that attacks the body’s nerves and causes difficulty breathing, muscle paralysis, and even death. Homemade foods that have been improperly canned, preserved, or fermented are common sources of foodborne Cbot. Anderson is part of the effort to ensure that seal oil is safe for the elders to eat.

“I help Cyrus make the seal oil and take scientific measurements—like temperature and pH—throughout the process to establish controls for Cbot,” she says. Anderson has also helped to develop a food safety plan that helps ensure seal oil produced by the Traditional Foods Program is free from Cbot and safe to consume. “Our goal is to get a state-approved food safety plan for using traditional seal oil so that it is available on a daily basis for the elders at the long-term care facility, since they have eaten this traditional food throughout their lives.” 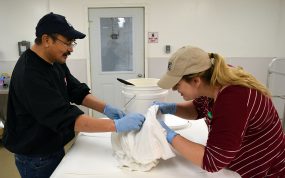 Anderson (right) helps Harris remove leftover “bits and pieces” in rendered seal oil before bottling and storing the oil for use. Seal oil is served with every meal.

“The work is unique to the area,” Anderson says. “I had thought that as an associate I’d be doing epidemiological analyses on a computer. Instead, I’m doing seal oil processing or vaccinating sled dogs against rabies—the work is awesome!”

Dankmeyer admires Brittany’s willingness to try new things. “We couldn’t have asked for a better person or public health professional than Brittany Anderson,” he says. “Simply put, having an associate allowed us to do what we’ve been dreaming of doing.”

“We’ll definitely apply to be a host site again because the public health needs in Northwest Alaska are far greater than our ability to meet them.”—Dankmeyer

“Having her as our assigned associate added a talented, motivated, aspiring—and inspiring—public health professional to our limited workforce,” Dankmeyer continues. “Before Brittany, the environmental health program was a one-person show and lacked the capability to emphasize prevention over response. But with her help, we were able to transform our environmental health program and services to better meet the environmental public health needs of Northwest Alaska. We’ll definitely apply to be a host site again because the public health needs in Northwest Alaska are far greater than our ability to meet them.”

Make sure you don’t miss anything! Sign up to receive important updates from PHAP: