Some zoonotic hookworm species are capable of infecting humans, but they typically do not develop in the intestine (see intestinal hookworms) and instead infect extraintestinal sites like the skin. Cutaneous larva migrans (CLM) has been associated with Ancylostoma caninum, A. braziliense, and Uncinaria stenocephala, which are all hookworms of dogs and cats. Bunostomum phlebotomum, a cattle hookworm, is also capable of causing short-lived CLM in humans. 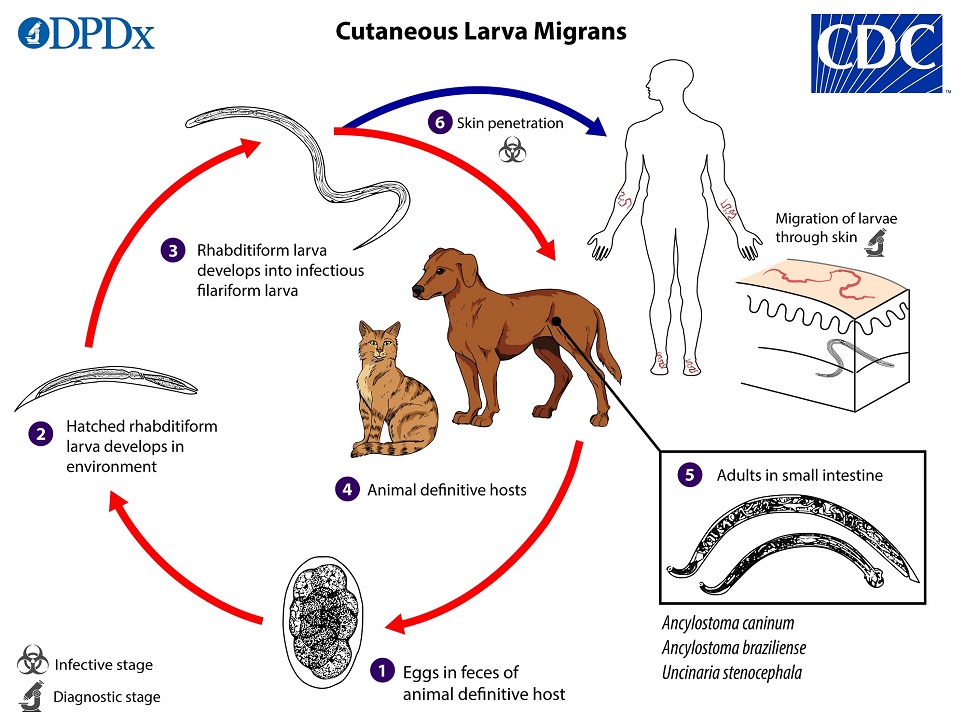 Cutaneous larva migrans (also known as creeping eruption) is a zoonotic infection with hookworm species that do not use humans as a definitive host, the most common being Ancylostoma braziliense and A. caninum. The cycle in the definitive host is very similar to the cycle for the human species, which involves tracheal migration to the small intestine. Some larvae become arrested in the tissues and serve as the source of infection for pups via transmammary (and possibly transplacental) routes. Mature hookworms reproduce in the small intestine, and eggs are passed in the animal definitive host’s stool

, and under favorable conditions (moisture, warmth, shade), larvae hatch in 1 to 2 days. The released rhabditiform larvae grow in the feces and/or the soil

, and after 5 to 10 days (and 2 molts) they become filariform (third-stage) larvae that are infective

. These infective larvae can survive 3 to 4 weeks in favorable environmental conditions. On contact with the animal host

, the larvae penetrate the skin and are carried through the blood vessels to the heart and then to the lungs. They penetrate into the pulmonary alveoli, ascend the bronchial tree to the pharynx, and are swallowed. The larvae reah the small intestine, where they reside and mature into adults. Adult worms live in the lumen of the small intestine, where they attach to the intestinal wall. Some larvae become arrested in the tissues, and serve as source of infection for pups via transmammary (and possibly transplacental) routes

. With most species, the larvae cannot mature further in the human host and migrate aimlessly within the epidermis, sometimes as much as several centimeters a day. Some larvae may become arrested in deeper tissue after skin migration.