In addition, other species of schistosomes, which parasitize birds and mammals, can cause cercarial dermatitis in humans but this is clinically distinct from schistosomiasis. 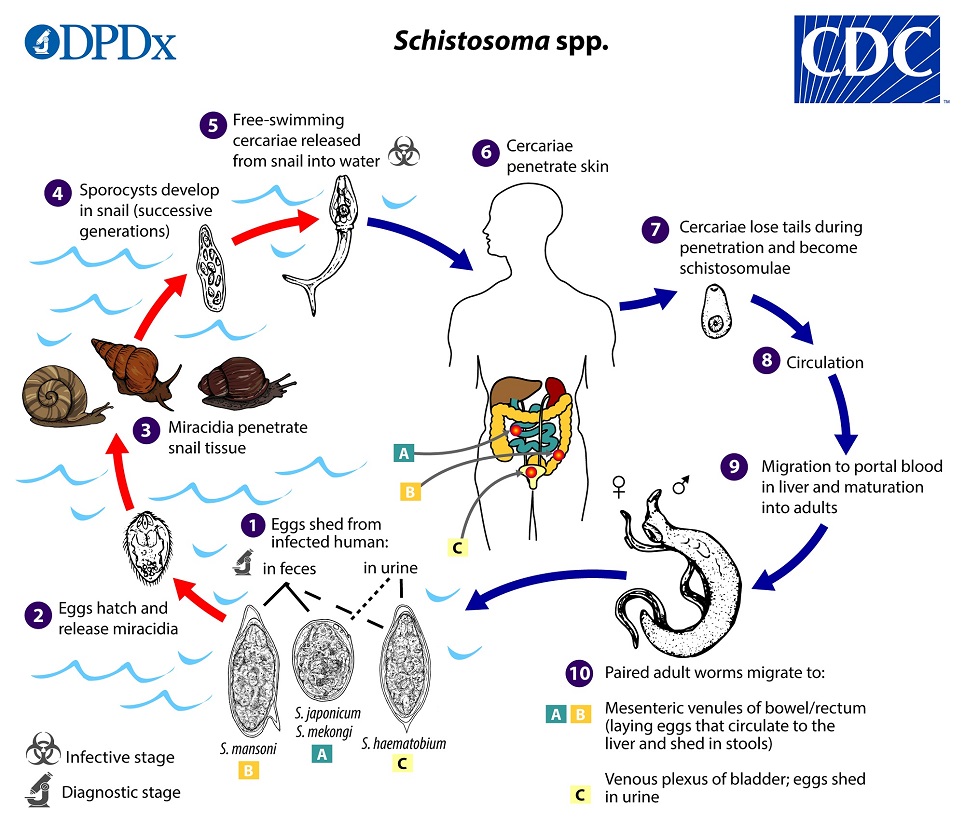 Schistosoma eggs are eliminated with feces or urine, depending on species

. Under appropriate conditions the eggs hatch and release miracidia

. The stages in the snail include two generations of sporocysts

and the production of cercariae

. Upon release from the snail, the infective cercariae swim, penetrate the skin of the human host

. The schistosomulae migrate via venous circulation to lungs, then to the heart, and then develop in the liver, exiting the liver via the portal vein system when mature,

. Male and female adult worms copulate and reside in the mesenteric venules, the location of which varies by species (with some exceptions)

. However, both species can occupy either location and are capable of moving between sites. S. intercalatum and S. guineensis also inhabit the inferior mesenteric plexus but lower in the bowel than S. mansoni. S. haematobium most often inhabitsin the vesicular and pelvic venous plexus of the bladder

, but it can also be found in the rectal venules. The females (size ranges from 7–28 mm, depending on species) deposit eggs in the small venules of the portal and perivesical systems. The eggs are moved progressively toward the lumen of the intestine (S. mansoni,S. japonicum, S. mekongi, S. intercalatum/guineensis) and of the bladder and ureters (S. haematobium), and are eliminated with feces or urine, respectively

Various animals such as cattle, dogs, cats, rodents, pigs, horses, and goats, serve as reservoirs for S. japonicum, and dogs for S. mekongi. S. mansoni is also frequently recovered from wild primates in endemic areas but is considered primarily a human parasite and not a zoonosis.

Schistosoma mansoni is found primarily across sub-Saharan Africa and some South American countries (Brazil, Venezuela, Suriname) and the Caribbean, with sporadic reports in the Arabian Peninsula.

S. haematobium is found in Africa and pockets of the Middle East.

S. japonicum is found in China, the Philippines, and Sulawesi. Despite its name, it has long been eliminated from Japan.

The other, less common human-infecting species have relatively restricted geographic ranges. S. mekongi occurs focally in parts of Cambodia and Laos. S. intercalatum has only been found in the Democratic Republic of the Congo; S. guineensis is found in West Africa. Instances of infections with hybrid/introgressed Schistosoma (S. haematobium x S. bovis, x S. curassoni, x S. mattheei) have occurred in Corsica, France, and some West African countries.

Symptoms of schistosomiasis are not caused by the worms themselves but by the body’s reaction to the eggs. Many infections are asymptomatic. A local cutaneous hypersensitivity reaction following skin penetration by cercariae may occur and appears as small, itchy maculopapular lesions. Acute schistosomiasis (Katayama fever) is a systemic hypersensitivity reaction that may occur weeks after the initial infection, especially by S. mansoni and S. japonicum. Manifestations include systemic symptoms/signs including fever, cough, abdominal pain, diarrhea, hepatosplenomegaly, and eosinophilia.

Occasionally, Schistosoma infections may lead to central nervous system lesions. Cerebral granulomatous disease may be caused by ectopic S. japonicum eggs in the brain, and granulomatous lesions around ectopic eggs in the spinal cord may occur in S. mansoni and S. haematobium infections. Continuing infection may cause granulomatous reactions and fibrosis in the affected organs (e.g., liver and spleen) with associated signs/symptoms.