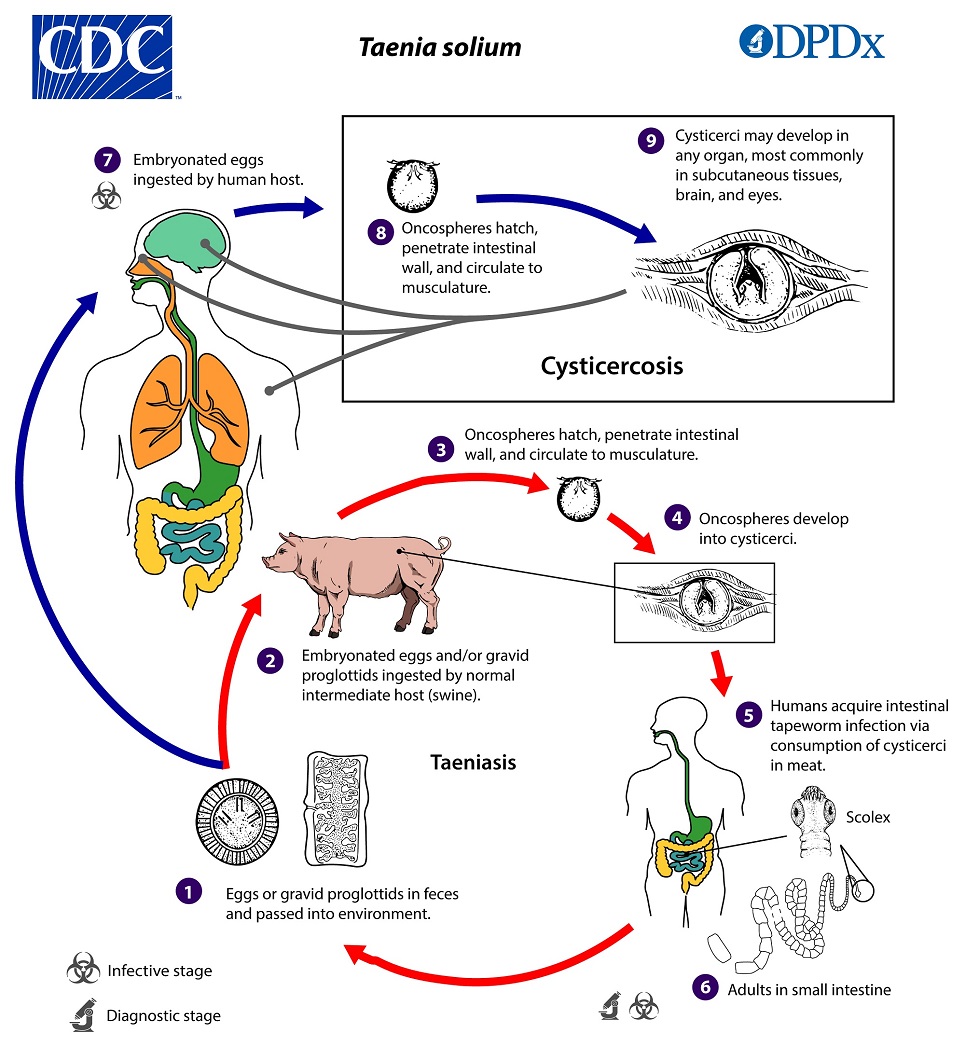 Cysticercosis is an infection of both humans and pigs with the larval stages of the parasitic cestode, Taenia solium. This infection is caused by ingestion of eggs shed in the feces of a human tapeworm carrier

. These eggs are immediately infectious and do not require a developmental period outside the host. Pigs and humans become infected by ingesting eggs or gravid proglottids

. Humans are usually exposed to eggs by ingestion of food/water contaminated with feces containing these eggs or proglottids or by person-to-person spread. Tapeworm carriers can also infect themselves through fecal-oral transmission (e.g. caused by poor hand hygiene). Once eggs or proglottids are ingested, oncospheres hatch in the intestine

invade the intestinal wall, enter the bloodstream, and migrate to multiple tissues and organs where they mature into cysticerci over 60–70 days

. Some cysticerci will migrate to the central nervous system, causing serious sequelae (neurocysticercosis).

Humans are normal definitive host for T. solium; cysticercosis results from humans acting as accidental intermediate hosts for the parasite (this role is normally fulfilled by swine).

It is important to note that human cysticercosis is acquired by ingesting T. solium eggs shed in the feces of a human T. solium tapeworm carrier (e.g. on contaminated food items), and thus can still occur in populations that neither eat pork nor share environments with pigs, as long as the human carrier is present.

The symptoms of cysticercosis vary depending upon the location and number of cysticerci. Cysticerci may develop in skeletal and heart muscle, skin, subcutaneous tissues, the lungs, liver, and other tissues, including the oral mucosa. In most locations, cysticerci cause few symptoms and spontaneously degenerate.

Cysticerci can migrate to the central nervous system and cause neurocysticercosis (NCC), which is associated with serious neurological and epileptic manifestations. Death can occur suddenly. NCC is typically divided into parenchymal and extraparenchymal disease. Parenchymal NCC occurs when cysticerci develop within the brain tissue. Extraparynchymal NCC occurs when cysticerci develop in other parts of the nervous system, such as the subarachnoid space, meninges, ventricles, spine, or eyes. A rare variant called “racemose cysticercosis” involves the development of cysts that are unusually large, multilobular, and clustered; they may lack a scolex. This form usually occurs in extraparenchymal sites (e.g., subarachnoid space, meninges). Mixed parenchymal and extraparenchymal disease can occur.