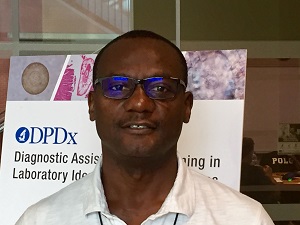 Michael Aidoo is the Associate Director for Laboratory Science (ADLS) in the Division of Parasitic Diseases and Malaria.

Most recently, Michael worked as a microbiologist in the Malaria Branch’s Laboratory Diagnostics and Research Unit, where he has conducted research of applied diagnostics and managed the annual global malaria rapid diagnostic test (RDT) product evaluation program. In this role, he also served as the diagnostics advisor for the U.S. President’s Malaria Initiative (PMI). In that capacity, he supported several PMI countries in the initial roll-out of malaria RDTs and development of malaria diagnostics quality assurance systems. He has also provided multiple consultations to the WHO on quality assurance of malaria diagnostics and played a key role in development of some of the documents guiding WHO’s test and treat initiative.

Dr. Aidoo first joined CDC in 1996 as an American Society for Microbiology (ASM) Post-doctoral fellow with DPDM, during which he conducted immunogenetic studies on malaria describing for the first time in a prospective cohort study the protective effects of sickle cell carriage on malaria. From 1999 to 2009 he worked in CDC’s, Division of HIV/AIDS Prevention, studying the immunogenetics of HIV and conducting candidate HIV vaccine trials in non-human primates. In 2015, Michael served as the Laboratory Coordinator for CDC’s Ebola Response Team in Liberia.

Michael’s laboratory career started at the Noguchi Memorial Institute for Medical Research (NMIMR), Ghana, where he evaluated HIV rapid tests early in the epidemic as well as conduct vaccine potency testing and cold chain monitoring of WHO’s Expanded Program on Immunization (EPI) vaccines. From 1990-1993 he worked at the British Medical Research Council laboratories (MRC), The Gambia, conducting research on viruses that cause acute respiratory infections in neonates and young children.

Dr. Aidoo is an author on 39 peer reviewed publications and two book chapters since 2017, he has served as an editorial board member of Clinical and Vaccine Immunology journal. His research interests are in detection and prevention of infectious diseases, differential susceptibility of humans to these diseases, and how to use data from these studies to develop tools for control and prevention, including the development of diagnostic tests and vaccines.