Spotted fevers (including RMSF) share many signs and symptoms such as fever, headache, and rash. It can be difficult to distinguish between RMSF and other spotted fevers, especially during early stages of illness. RMSF is rapidly progressing and requires treatment within the first 5 days of illness to prevent severe illness and death. Rapidly progressing illness and absence of an eschar should prompt suspicion of RMSF and empiric treatment with doxycycline should be initiated.

Rickettsia parkeri rickettsiosis was first reported in 2004, and since that time, more than 40 patients have been identified. R. parkeri is spread by the Gulf Coast tick, Amblyomma maculatum pdf icon[PDF – 1 page], which is found predominantly found in the southeastern United States.

Rickettsialpox is caused by R. akari. Unlike other spotted fevers, R. akari is spread through the bite of infected house mouse mites (Liponyssoides sanguineus). Cases occur sporadically throughout the United States, but are often reported in the Northeast, particularly New York City. 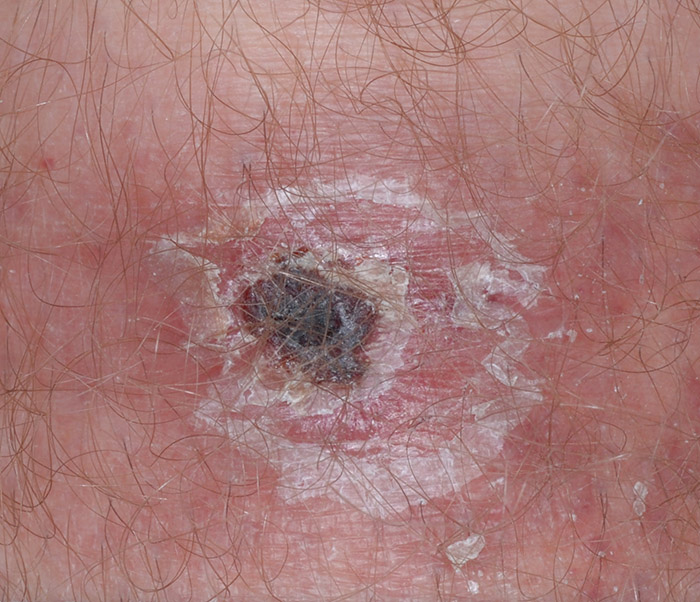 Spotted fevers can range from relatively mild infections to fatal disease. Infections caused by R. parkeri, R. species 364D, or R. akari are characteristically less severe than RMSF. Hospitalizations occur less frequently from these spotted fevers and deaths have not been reported. Some patients may resolve without treatment.

Similar to R. rickettsii, R. parkeri, R. species 364D, and R. akari cause acute febrile illnesses often accompanied by headache, myalgia, and rash, but are also likely to have ulcerated, necrotic regions at the site of tick or mite attachment, called eschars pdf icon[PDF – 2 pages]. Eschars often appear before the onset of fever and can be non-tender or mildly tender.

Patients with R. parkeri rickettsiosis typically develop an eschar, followed by a fever, muscle pain, headache, and rash. Rash is often described as maculopapular or vesicular eruptions on the trunk and extremities. Regional lymphadenopathy is detected in about 25% of patients. Gastrointestinal symptoms are rare. Patients often develop mildly elevated levels of hepatic transaminases, mild leukopenia, and less frequently mild thrombocytopenia.

Patients with Pacific Coast tick fever usually develop an eschar, followed by fever, regional lymphadenopathy, headache, myalgia, and fatigue. Rash is a less common than with the other spotted fevers.

Patients with rickettsialpox characteristically develop an eschar at the site of the bite of a R. akari-infected mite, followed by fever, headache, and rash. The rash appears as sparse, erythematous, papulovesicular eruptions involving the trunk, face, and extremities. Lymphadenopathy may be present, and mild and transient leukopenia, thrombocytopenia, and elevated levels of hepatic transaminases may occur. Although rare, moderately severe cases of rickettsialpox have been reported and may involve symptoms of the central nervous system such as stiff neck and photophobia.

For more in-depth information about signs and symptoms of spotted fever rickettsioses, please read the updated MMWR Recommendations and Reports.

Spotted fevers can be difficult to diagnose due to the non-specific signs and symptoms in early stages of illness. Signs and symptoms can vary from patient to patient and can resemble other more common diseases. Nonetheless, early consideration of rickettsial disease in the differential diagnosis and empiric treatment is crucial to prevent severe illness. Many diagnostic tests for spotted fevers, especially tests based on the detection of antibodies, will frequently appear negative in the first 7-10 days of illness and cannot be relied upon for initiation of antibiotic therapy.

Information such as recent tick bites, exposure to tick habitats, contact with dogs, similar illnesses in family members or pets, or history of recent travel to areas of high incidence can be helpful in making the diagnosis. Tick bites are often painless and many people with rickettsial disease do not remember being bitten by a tick.

Clinical indicators such as thrombocytopenia (low platelet count), hyponatremia (low serum sodium), or mild to moderately elevated levels of hepatic transaminases can be helpful predictors of spotted fever infection but may not be present in all patients, particularly those in early stages of illness. After a diagnosis is made on clinical suspicion and treatment has begun, specialized laboratory testing should be used to confirm the diagnosis.

Doxycycline is the treatment of choice for all suspected rickettsial infections, including RMSF, R. parkeri rickettsiosis, Pacific Coast tick fever, and rickettsialpox.

Empiric treatment with doxycycline is recommended in patients of all ages, particularly when a life-threatening disease such as RMSF is suspected. Treatment is most effective at preventing death and severe illness when doxycycline is started within the first 5 days of symptoms.

When a patient is treated within the first 5 days of illness, fever generally subsides within 24-48 hours. In fact, failure to respond to doxycycline suggests that the patient’s condition might not be caused by rickettsial infection. Severely ill patients may require longer periods before their fever resolves, especially if they have experienced damage to organ systems. Resistance to doxycycline or relapses in symptoms after the completion of the recommended course of treatment have not been documented.

Patients should be treated for at least 3 days after the fever subsides and until there is evidence of clinical improvement. Minimum total course of 5–7 days for uncomplicated cases.

The use of doxycycline to treat suspected rickettsial disease in children is standard practice recommended by both CDC and the American Academy of Pediatrics Committee on Infectious Diseases. Use of antibiotics other than doxycycline increases the risk of severe illness and patient death in cases of RMSF. In a recent study, experts at the CDC and the Indian Health Service found that short courses of doxycycline do not result in staining of permanent teeth or enamel hypoplasia. Use doxycycline as the first-line treatment for suspected spotted fever rickettsioses in patients of all ages.

Post-tick bite antibiotic prophylaxis is not recommended to prevent rickettsial infection. Persons who experience a tick bite should watch for symptoms suggestive of tickborne illness and consult a health care provider if fever, rash, eschar, or other symptoms develop within 2 weeks of tick bite.

For more information on the recommended treatment of spotted fever rickettsioses, please read the updated MMWR Recommendations and Reports. 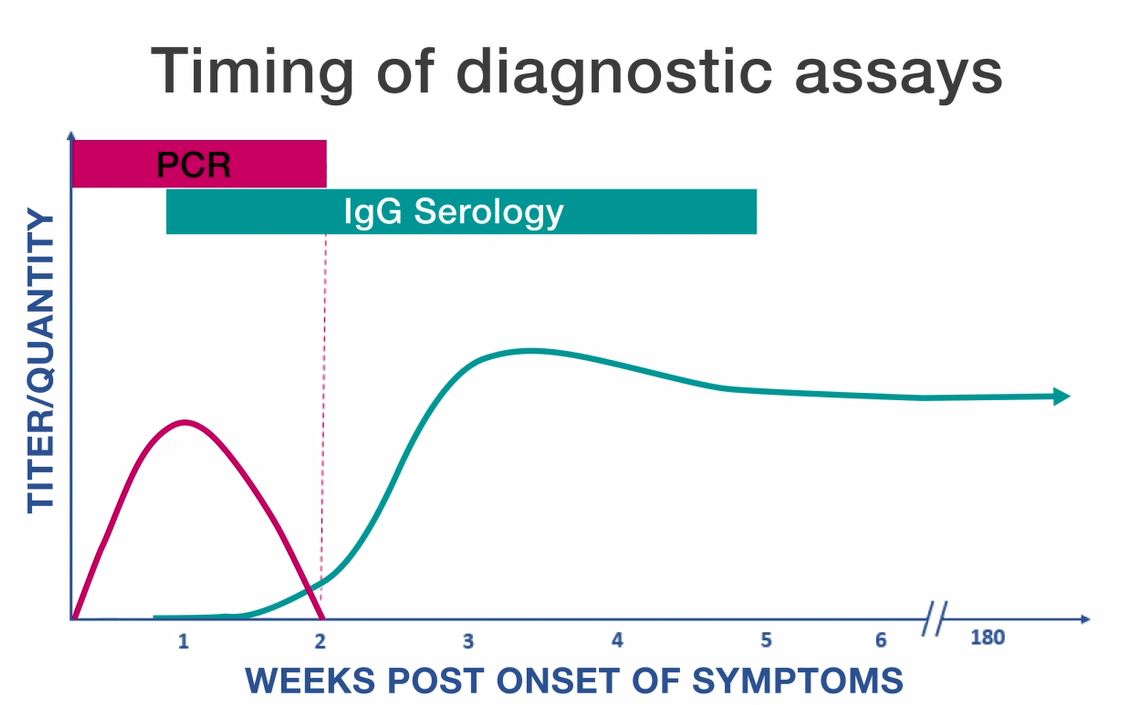 This video provides information on rickettsial disease diagnostic methods for healthcare providers, including what tests are available and when it is most appropriate to collect samples. This video focuses on the use of polymerase chain reaction (or PCR) tests, and the indirect immunofluorescence antibody (IFA) assay for rickettsial disease diagnosis.

Serologic assays are the most frequently used methods for confirming cases of spotted fever group rickettsiosis. The reference standard for serologic diagnosis is the indirect immunofluorescence antibody (IFA) assay. Diagnosis is typically confirmed by documenting a four-fold or greater rise in antibody titer between acute and convalescent-phase serum samples. Acute-phase specimens are taken during the first week of illness and convalescent-phase samples are generally obtained 2–4 weeks after the resolution of illness. Eighty-five percent of patients will not have detectable antibody titers during the first week of illness and a negative test during this time does not rule out spotted fever infection. In most patients with a spotted fever group rickettsiosis, the first immunoglobulin G (IgG) IFA titer is negative and the second typically shows a four-fold or greater increase in IgG antibody levels.

Immunoglobulin M (IgM) antibodies are less specific than IgG antibodies and more likely to produce a falsely positive result. Closely related species of SFGR (such as R. rickettsii, R. akari, R. parkeri, or R. species 364D) share similar antigens such that antibodies directed to one of these antigens can cross-react with other heterologous spotted fever group antigens. Most commercial labs are unable to differentiate one spotted fever infection from another using these serologic methods.

Antibody titers can remain elevated for months or longer after the disease has resolved or can be detected in persons who were exposed previously to antigenically related organisms. For these reasons, as many as 10% of persons in some areas of the United States can have elevated levels of antibodies that react with R. rickettsii or similar organisms. Therefore, a single antibody titer should not be used to document or exclude a diagnosis of a spotted fever group rickettsiosis. The most conclusive method is the evaluation paired serum samples, collected 2-4 weeks apart, which reveal a four-fold or greater rise in antibody titer.

SFGR species infect the endothelial cells that line blood vessels and do not circulate in large numbers in the blood until the disease has progressed to a severe phase of infection. For this reason, whole blood specimens obtained during the first several days of illness are often negative when tested by polymerase chain reaction (PCR) assays or culture. If the patient has a rash or eschar, PCR, or immunohistochemical (IHC) assays can be performed on a skin biopsy specimen. Eschars may alternatively be swabbed for the collection of infected exudate. Swabs of eschars are less invasive than skin biopsies, but do not allow for IHC testing or cell culture evaluation. See instructions for the collection of skin biopsy pdf icon[PDF – 1 page] and eschar swabs pdf icon[PDF – 2 pages]. PCR, culture, and IHC assays can also be applied to autopsy tissue specimens. SFGR species are obligate intracellular pathogens and cannot be propagated using routine blood culture methods. Culture of SFGR species is generally available only at specialized laboratories that perform cell culture and are equipped with the appropriate biosafety facilities.