"If We Can Do It, So Can You” Imperial County, California 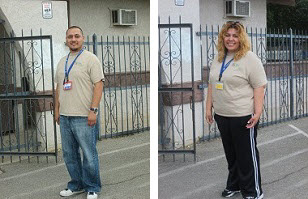 Pedro Pacheco and Lilia Chavez are both community health workers and promotoras with the Clinicas de Salud del Pueblo “Our Choice” program in Imperial County, California. Imperial County is a border county located in southern California with fewer resources than neighboring areas such as San Diego. “Our Choice” is part of the Childhood Obesity Research Demonstration (CORD) project funded by the Centers for Disease Control and Prevention. Pedro and Lilia coordinate the family wellness classes at Clinicas and also serve as important links between the health center and the other project sectors such as childcare and schools, and connecting families to community resources to improve nutrition and physical activity habits.

As part of “Our Choice”, the promotoras were required to take six weeks of training to prepare them for working with the families on childhood obesity. During the training, and the subsequent classes that the promotoras conducted with families, these two staff started practicing what they were taught. Pedro said that he started to eat more vegetables even though he had not been a vegetable eater in the past. He said that he even started eating vegetables at parties and took a salad to a family gathering during the holidays. Pedro began running four miles at least three times a week and was trying to improve his time as he got into better shape.

Lilia said she started her change by drinking more water and watching what she ate. She realized that eating more fruits and vegetables really helped. She still has trouble exercising as much as she needs, but she is working on that.

Both Pedro and Lilia have been influenced by family members. For Pedro, it was his mother who told him, “How can you be working on a project to prevent obesity when you are overweight yourself? You need to start with you”. The fellow promotoras have also helped motivate him. For Lilia, her children helped motivate her. She has been having them make the changes with her. Lilia said, “We fill up our bottles every day with water and they take it with them to school and I take mine to work”. Her daughter helps remind her of the healthy choices they have to make every day.

Both agreed that living in Imperial Valley can make it more difficult to make healthy choices. The traditional Mexican and American dishes that are the center of the family and social lives can create barriers. They also live in a very hot climate where few want to be outside from May to September.

Pedro lost 40 pounds and Lilia lost 26 pounds during the first months of the project. Both are still working on losing more because they haven’t reached their healthy weight goals yet. The implications to their health are big, but the example they are setting for other families and people like them are even bigger. The promotoras received training on how to teach families about situations where there is a lot of unhealthy food, like family gatherings during the holidays. Pedro and Lilia said, “We feel that being honest with the families we serve and letting them know that we are trying to be healthier ourselves at the same time they are, really shows that it can be done; that this program is realistic.”