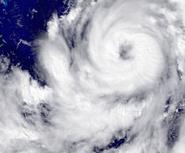 In late summer 2017, the United States endured two severe hurricanes back to back. Tennessee, although far from the eye of each storm, was a likely location for people to seek shelter. Any increase in patients could have a profound effect on healthcare facilities.

In preparation for the influx of evacuees during Hurricanes Harvey and Irma, Tennessee health officials identified syndromic surveillance as the only information source capable of rapidly collecting health data on out-of-state patients. Tennessee began monitoring visits of patients displaced by the hurricanes seeking emergency healthcare. Health departments used data to understand the volume of out-of-state emergency department (ED) patients in Tennessee, assess the impact on the healthcare system, and identify which hospital EDs were receiving the most out-of-state patients. The health department shared these results daily with the State Health Operations Center and with agency response partners including the Tennessee Emergency Management Agency. Health officials monitored ED visits until the number of patients returned to baseline levels. No concerning trends in syndromes or chief complaints were identified among Texas or Florida patients.

In late summer 2017, the United States endured two severe hurricanes back to back. On August 25, 2017, Hurricane Harvey made landfall in Texas and southwest Louisiana, dumping more than 19 trillion gallons of rain. On September 10, 2017, 20 days later, Hurricane Irma landed in Florida, leading residents across the Florida peninsula to evacuate inland and out of the path of the storm. Although Tennessee was far from the eye of the storms, state health officials knew residents from both states could choose to shelter in Tennessee. In preparation for the influx of evacuees during Hurricanes Harvey and Irma, Tennessee health officials turned to the Electronic Surveillance System for the Early Notification of Community-Based Epidemics, known as ESSENCE, to monitor out-of-state patients seeking emergency healthcare in Tennessee. ESSENCE captures data from emergency departments (EDs) in nearly real time.

The Tennessee Department of Health (TDH) collects ED data from more than 70 hospitals across Tennessee. Hospitals in Tennessee typically provide syndromic data within 48 hours of a patient visit. Although syndromic surveillance often supplements disease- or condition-specific surveillance, syndromic data can also improve general situational awareness of ED patients during an event or response.

Monitoring was set up in ESSENCE using a simple query of the Patient Location (Full Details) data set. Data were limited to hospital ED visits reported by Tennessee (Site = “Tennessee”). To monitor ED visits among residents of Texas before, during, and after Hurricane Harvey, data were queried for a patient ZIP code within Texas (State = “Texas”). ED visits among Florida residents were monitored similarly (State = “Florida”) before, during, and after Hurricane Irma. Additionally, a free-text chief complaint search was used for the terms “Harvey,” “Irma,” “hurricane,” “evacuee,” “evacuate,” “Florida,” and “Texas.” Chief complaint search results were then filtered to remove visits with patient ZIP codes within Tennessee.

The free-text chief complaint query first exceeded the expected value on September 9, peaked on September 11 with 5 patient visits, and returned to expected levels on September 14. From August 18 through September 24, at least 21 of 30 visits captured by the query were among Florida residents. One Tennessee hospital appeared to intentionally use the term “Irma” in its chief complaint field for patients from Florida affected by the hurricane.

By using ESSENCE, state health officials could monitor the volume of out-of-state ED patients in Tennessee, assess the impact on its healthcare system, and identify geographic or hospital-specific clustering of out-of-state patients. TDH shared these results in its daily State Health Operations Center (SHOC) situation reports and with agency response partners including the Tennessee Emergency Management Agency (TEMA). 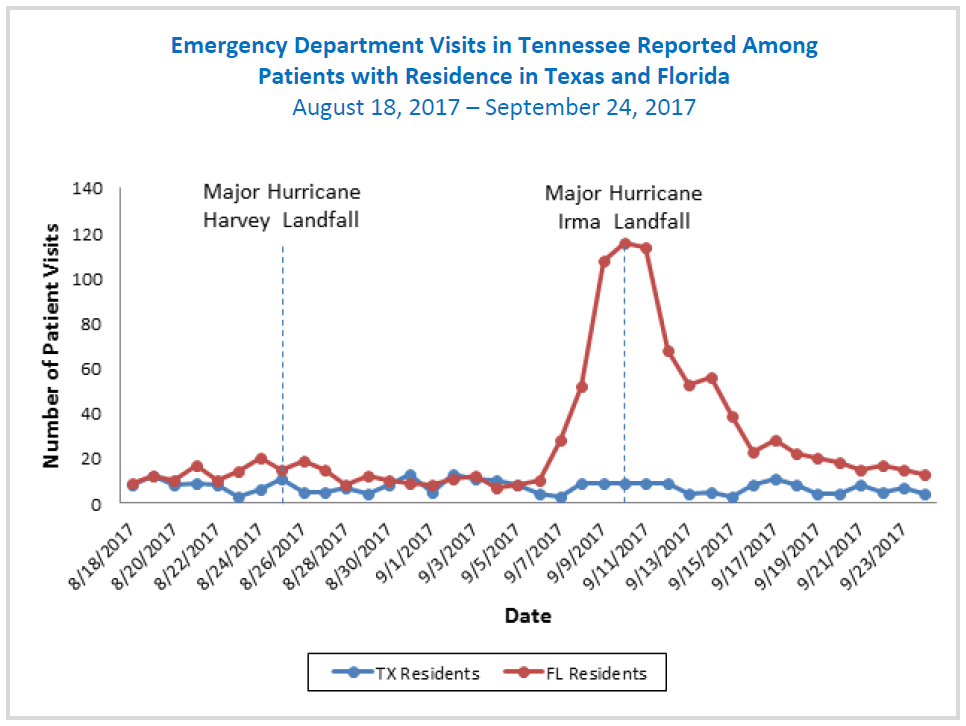