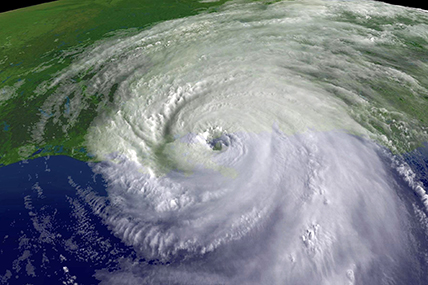 The public health impact from hurricanes and tropical storms can be devastating and multifaceted. State and local health departments in areas likely to be affected by these natural disasters put considerable effort into developing emergency plans and resources to help communities prepare and respond. To understand the complexity of the impact—for example the disruption of infrastructure, storm-related injuries and illnesses, and displacement of people—public health practitioners need timely and actionable data.

During public health emergencies, state and local health departments that participate in CDC’s National Syndromic Surveillance Program (NSSP) use syndromic surveillance to capture data quickly, improve situational awareness, and inform decision making. Syndromic surveillance is often used in tandem with case-based surveillance systems and, during a hurricane response, can be readily integrated with other information such as weather and air quality data. During some phases of emergency operations, syndromic data can be the only available data source for identifying at-risk populations, monitoring use of healthcare resources, and verifying the effectiveness of response efforts in near real-time.

Syndromic surveillance is a well-proven way to collect prediagnostic data and, in recent years, has been creatively integrated with other data sources to better understand health threats. Collaboration across the surveillance community has produced an abundance of analytic tools, including interactive dashboards, that help public health analysts do their jobs even better and present information in ways decision makers can readily use.

There’s no way to predict if a hurricane season will include a storm the size of Hurricane Harvey or back-to-back storms as destructive as Hurricanes Irma and Marie. That’s why a comprehensive emergency response plan for conducting surveillance should be in place before it’s needed.

So, how do CDC’s NSSP teams work with state and local health departments? Depending on availability of state and local resources, NSSP analysts, scientists, and epidemiologists can scale their level of support to provide narrowly targeted assistance or, on request, provide full-scale support through in-depth analyses.

Syndromic surveillance can serve as the cornerstone for emergency surveillance efforts. Core NSSP services include a suite of analytic tools for conducting surveillance and analyzing, storing, and sharing data for everyday surveillance and emergency response—all at no charge to public health departments. For years, the NSSP team has been working with states, large health departments, and territories to set up data feeds for healthcare facilities (e.g., emergency departments and urgent care centers). NSSP has also established connections with the Assistant Secretary for Preparedness and Response’s (ASPR) Disaster Medical Assistance Team’s (DMAT) electronic health record system so that feeds of data from deployed DMAT teams can be analyzed within NSSP systems along with all other data sources.

Here’s some insight into how NSSP supports health departments during a hurricane response:

What is disaster epidemiology?

A comprehensive surveillance system uses syndromic surveillance in tandem with other surveillance methods, including case-based surveillance. In recent years, syndromic surveillance has expanded to include situational awareness, outbreak characterization, and resource allocation.2,3 Syndromic data are particularly useful for providing a baseline. Then, because syndromic data are captured in near real-time, analysts and epidemiologists can use these data to track trends against the baseline, contextualize likely post-disaster outcomes,2 and adjust response efforts during an emergency. After the response, syndromic surveillance can be used to monitor any delayed health outcomes.2 The NSSP team and participants in its community of practice continually share best analytic and surveillance practices and work together not only to advance the science but also to understand the human health impacts of a disaster.

Syndromic Surveillance Shows Medical Surge in Dallas–Fort Worth during Hurricane Harvey, 2017
Texas public health officials used syndromic surveillance to show the expansive use of healthcare services extending outside areas most affected by the hurricane. Plans for medical surge capacity should extend to areas 1 to 4 hours outside the disaster area.