Most outbreaks of norovirus illness happen when infected people spread the virus to others through direct contact, such as by caring for them or sharing food or eating utensils with them. Food, water, and surfaces contaminated with norovirus can also cause outbreaks.

Norovirus outbreaks have been reported in many settings. Some of the most commonly reported outbreak settings are listed below.

The virus can be introduced into healthcare facilities by infected patients, staff, visitors, or contaminated foods. Outbreaks in these settings can sometimes last months. Norovirus illnesses can be more severe and occasionally even deadly in patients in hospitals or long-term care facilities when compared with healthy people.

Restaurants and at Catered Events

Norovirus is the leading cause of outbreaks from contaminated food in the United States. About 50% of all outbreaks of food-related illness are caused by norovirus. Most of these outbreaks occur in food service settings like restaurants. Infected food workers are frequently the source of outbreaks in food-service settings, often by touching ready-to-eat foods, such as raw fruits and vegetables, with their bare hands before serving them. However, any food served raw or handled after being cooked can get contaminated with norovirus.

Foods that are commonly involved in norovirus outbreaks include:

Norovirus is the most frequent (over 90%) cause of outbreaks of diarrheal disease on cruise ships and these outbreaks often get media attention, which is why some people call norovirus the “cruise ship virus.” However, norovirus outbreaks on cruise ships account for only a small percentage (1%) of all reported norovirus outbreaks. Norovirus can be especially challenging to control on cruise ships because of the close living quarters, shared dining areas, and rapid turnover of passengers. When the ship docks, norovirus can be brought on board in contaminated food or water or by passengers who were infected while ashore. Repeated outbreaks on consecutive cruises may also result from infected crew or environmental contamination. This is because norovirus can persist on surfaces for days or weeks and is resistant to many common disinfectants.

Definition of a Norovirus Outbreak

An outbreak of norovirus is defined as an occurrence of two or more similar illnesses resulting from a common exposure that is either suspected or laboratory-confirmed to be caused by norovirus.

You can use the NORS Dashboard to learn about outbreak reports of foodborne, waterborne, and enteric (gastrointestinal) diseases spread by person-to-person contact, environmental contamination, animal contact, and more. 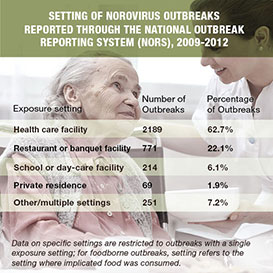