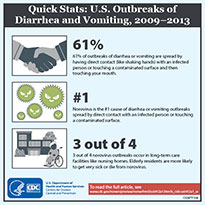 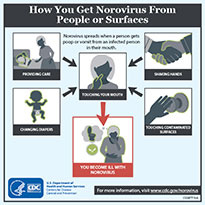 How You Get Norovirus from People or Surfaces 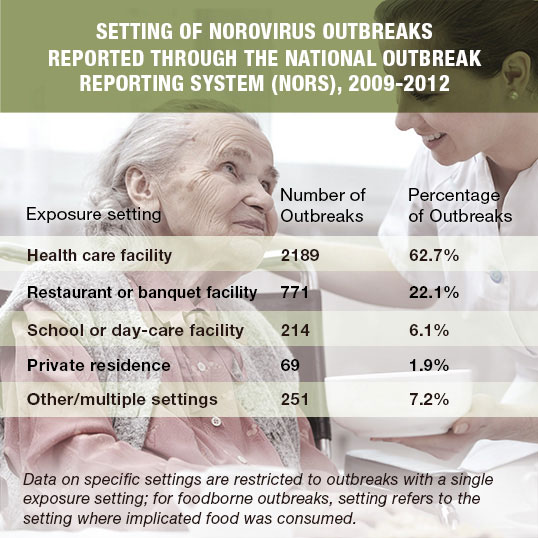 This graphic shows the common settings of norovirus outbreaks reported through NORS from 2009 to 2012. You can also use the NORS Dashboard to create graphics with more recent data and more specific modes of transmission. 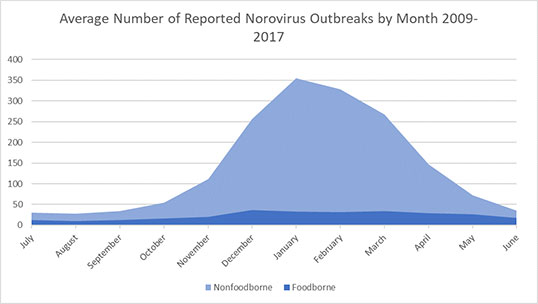 This graphic shows the average number of reported norovirus outbreaks by month from 2009 to 2017. You can also use the NORS Dashboard to create graphics with more recent data and more specific modes of transmission. 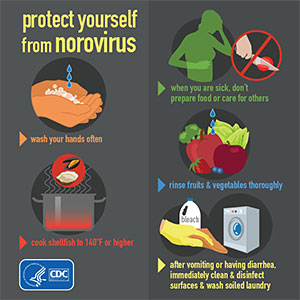 Protect Yourself from Norovirus

This graphic, available in English and in Spanish, highlights five tips to help prevent the spread of norovirus. Share this health message on your web page by copying and pasting the code to embed the graphic and a link to more information on norovirus prevention.

Copy this code for “Protect Yourself and Others from Norovirus” infographic:
(300×300) 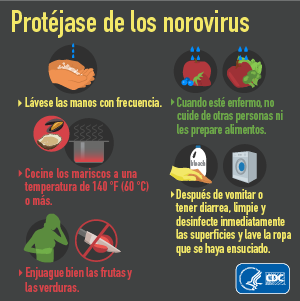 Have You Ever Heard of Norovirus? (On YouTube)
This short video explains what norovirus is, how it spreads, and how you can protect yourself and loved ones from getting it.
Running Time: 2:37 minutes
Date Released: 12/10/2015
Transcript [2 pages] 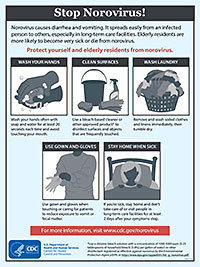 This poster shows different steps you can take to protect yourself and others, especially those living in long-term care facilities, from norovirus.
18 x 24 color [1 page]

The Water Quality and Health Council has a variety of posters about preventing the spread of norovirus. There is an English, Spanish, French, and language-neutral pictogram version. The posters are a product of a collaboration between Somerset County (NJ) Department of Health, City of Albuquerque Environmental Health Department, National Environmental Health Association, and American Chemistry Council.

CDC Vital Signs—Preventing Norovirus Outbreaks, Food Service Has a Key Role
This Vital Signs includes the report, a factsheet, and graphics about norovirus, the leading cause of disease outbreaks from contaminated food in the United States, as well as information about food safety practices that can help prevent these outbreaks.

Disease of the week: Norovirus
This article includes key facts, prevention tips, an informative video, and even a quiz to test your knowledge about Norovirus.

Copy and paste the HTML code to place the widget on your page and share prevention tips with your web visitors.