alert icon
Archived: This Page Is No Longer Being Updated

NOTE: This page is archived for historical purposes and is no longer being maintained or updated.

NIOSH recently held its first NORA Photo Contest. 77 entries were received from across the Institute. There were seven categories that each corresponded to a NORA sector. A internal panel of judges reviewed the photos based on aesthetic quality of the photograph, quality of the story told by the photo, and originality of the subject. A winner was selected from each NORA sector category as well as a “best in show.” The winning photos are shown below. All of the submitted photos as well as other NOSH photos can be seen viewed on the  NIOSH flickr site . 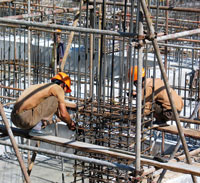 Photo Title: Rebar Tying in Beijing
Caption: This photo shows two workers tying rebar approximately three stories above the ground. There are several notable safety issues, particularly the lack of personal protective equipment to prevent falls, footwear that provides little protection for the feet or resistance to slips, and narrow, uneven surfaces to walk and work on. In the background, the lack of rebar caps (which are inexpensive) is apparent. This work was being carried out in long shifts and long workweeks, with afternoon temperatures that day around the mid 90s (F). As economies become more global, hopefully so do the opportunities to impact occupational safety and health.

Photo title: Skipper Bud Marrese Operating the NIOSH-developed Emergency Stop on His Capstan Deck Winch.
Caption: Capstan winches have been a source of many injuries, and even fatalities, to commercial fishermen who accidentally become entangled with lines or nets as they are being retrieved. NIOSH researchers developed an emergency-stop device, shown being tested here, to reduce the incidence of such injuries. 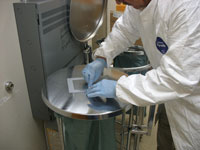 Photo Title: Collecting Wipe Samples for Antineoplastic Contamination
Caption: As part of its initiative to identify occupational exposure to antineoplastic drugs, NIOSH personnel conducted three field studies where air, wipe and other samples were collected. In this photo environmental wipe samples are being collected from the lid of a hamper used for drug-contaminated linen.

Photo Title: Recycling lead in a lead-acid battery recovery facility.
Caption: The young man is ladling molten recycled lead into billets in a lead-acid battery recovery facility. Lead is an extremely toxic substance and workers must be protected from its effects. Any manufacturing operation involving lead has the potential for overexposure, and so the elements of a lead program (including provision of work clothes and PPE) are in place here. 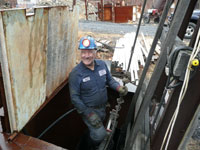 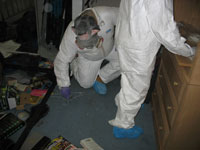 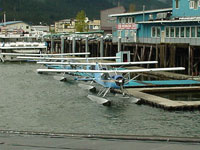 Photo Title: Air Taxis
Caption: Due to the limited road infrastructure, air transportation is common in Alaska. NIOSH has had an Aviation initiative looking at safety for pilots and those who fly in Alaska. The aircrafts in this photo are “air taxis” used to fly residents and visitors to destinations in Southeast Alaska. 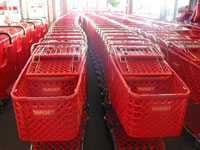 Photo Title: Shop ‘Til You Drop
Caption: Retail stores are usually organized, well spaced, neat, and designed with the safety of the customer and employees in mind.