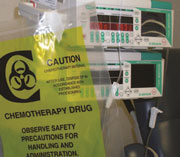 The new document, NIOSH List of Antineoplastic and other Hazardous Drugs in Healthcare Settings, 2014, is the latest version of the hazardous drug list first published by NIOSH in 2004 as an appendix to the document, NIOSH Alert: Preventing Occupational Exposure to Antineoplastic and Other Hazardous Drugs in Health Care Settings. Hazardous drugs on the list include those used for cancer chemotherapy, antiviral drugs, hormones, some bioengineered drugs, and other miscellaneous drugs.

“Millions of American workers in healthcare facilities may come into contact with drugs that are capable of causing serious health effects such as cancer, fertility problems, and organ damage,” said NIOSH Director John Howard, M.D. “This list is an important resource to help workers be aware of the hazards certain drugs pose so they can take the necessary steps to protect themselves from exposure while doing their job.”

The current list is comprised of drugs that NIOSH has systematically reviewed according to the criteria in the NIOSH definition of a hazardous drug. The latest version of the list includes 27 drugs not found on previous lists, and 12 drugs were removed that did not meet NIOSH’s criteria for hazardous drugs. NIOSH made previous updates to the list in 2012 and 2010.

Additionally, the new document provides healthcare organizations with information on how to generate a list of hazardous drugs specific to their workplace as well as resources for evaluating the hazard potential of a drug.

NIOSH is the Federal agency that conducts research and makes recommendations for preventing work-related injuries and illnesses. It was created under the Occupational Safety and Health Act of 1970 and is part of the U.S. Centers for Disease Control and Prevention.